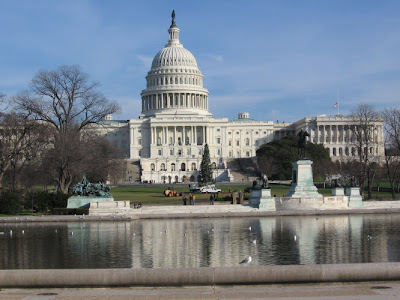 This time last year I was sent down to Baltimore Maryland and then with extra time on my hands I went to Washington DC to do some site seeing. Even as I left Canada it was warmer than usual but when I landed down there it was beautiful weather. In Washington I remember to me it felt like spring, for a Canadian on such sunny beautiful days I had to carry my coat most of the time. Baltimore had some nice sites (and delicious crab cakes which I never had before) but Washington was beautiful with the architecture of the buildings, plus it was kind of interesting to walk
around the city I often saw filmed in movies and TV shows. I left my map back at the hotel slowing me down a little in finding places I wanted to see, and being pressed for time I was unfortunately not able to see the White House. I played the lost little Canadian card and people were really helpful and friendly once they realized that I was Canadian and not going to mug them. If anyone lives in these cities I am just wondering do they have snow there now? I saw the temperatures are no where near the degrees they were this time last year. 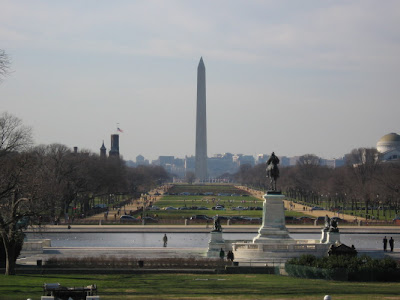 It was so beautiful and it gave me that little break that we Canucks need to help get us through the winter.
A sight I often see on TV and now I was able to take my own picture, you can see the haze of the day, or maybe that was smog! No just kidding it was a nice day the air smelled fresh. I think by clicking on the pictures, it will make them larger, that is if it works correctly. 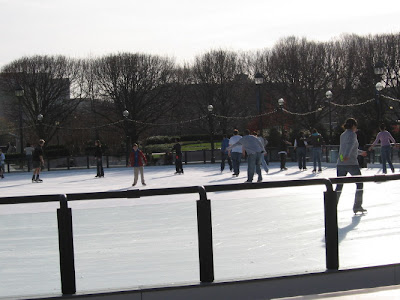 One of my favorite pictures is of the people skating while you can see green grass growing in the background. I guess the weather was not cooperating with their holiday plans. I wish that I was able to spend at least one more day there and maybe some day I will go back to continue where I left off. 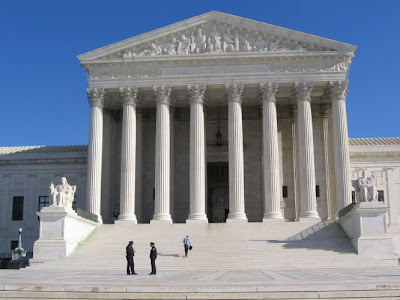 I used to see this building all the time on an old TV show but I could not remember what show. I came closer to hear what the cops were talking about, it was something funny like what was the best place to go for breakfast, very top secret of course.
I hope most Americans get to some day see their Capitol city at least once in their lives, I think it is worth the trip. As for our Capitol city I live in it so I see ours every day.

I love DC! It is a really cool city and the museums are redonkulous!

DC is really beautiful...lots of stately architecture (obv). If you get a chance to go back, check out the Eastern Market (or anyone checking comments). It is short walk from the capitol and the greene. I went just over year ago last fall to visit a friend in Georgetown...also a very pretty neighborhood to walk around. I agree with you on visiting your capitol (state and national...city hall to get local, too). As much as politics can be frustrating and sensational full of sound bytes, it is important. I was lucky enough to spend 10 days in DC while in grade school studying american gov't, meeting my reps, touring, and sitting in on sessions. The club/bar scene isn't bad either haha now that I'm 21+ of course...thanks for sharing your snapshots...made me pull up some of mine...

First off, playing the 'eh' card does wonders.
Second, its quite fascinating to see places we have only seen on tv isn't it, or even those that have such a storied history. I remember actually walking in Ottawa the first time, and just being in awe of the parliament buildings. I had read so much about them, watched them on the TV countless times, so to just see them was breathtaking.

DC is a great city and the White House and Supreme Court buildings used to be so beautiful, until they were sullied by the Bush dictatorship.

DC is one of our favs! We've been there, like, a dozen times!

Though a long time ago, I was in grad school in the DC area and attended church a a ghetto parish in the District. I loved it! A beautiful city with lots of things for a poor grad student to do.

Ah, those were the days.

No, not a single snow for a few weeks now. You're right, DC is lovely! I need to see more sites though, been slacking on it a bit. To think, I live walking distance from 'The Mall.'

I never imagined I would be living right here in DC, funny how life works out sometimes. Though we're inkling to visit Canada...

I'm in DC too and we've been snowless for some time. Last year we only got a pfft worth.

Let me know next time you come down and I'll be happy to give you the insider's tour.

I have never been to DC. But have thought about visiting. It does look very beautiful. Nice blog.

Love DC...as long as I don't have to drive there! Oy! The Beltway is quite possibly the scariest freeway with the craziest drivers in the country. Having lived in So. California, I'll never understand why those drivers get such a bad rap when DC harbors the real maniacs.

K, I know but I was not really able to see anything of the museums, that is one of the reasons I want to go back.

Psyther, thanks for the rec, I will try to see those if I get to go back. That was one of the things I liked, so much to see and all within walking distance.

Matt-cns, just don't play the eh card to a thug, saw a lot of those in the subway.
I know sometimes I kick myself not to take it for granted in where I live. I forget that until my cousins from out west come here and they want to spend the day down town seeing what I see all the time.

Kendall, I'm Canadian so I'm not touching that one, just maybe to say I think Cliton may have sullied some of the offices besides just one lady's dress! ;)

Wayne, I really did enjoy it but I was suddenly sent down in one day from work so I had no time to plan anything!

Joe, student you say, so that was only fifteen years ago? Hey I'm good to all my friends! ;)

Kris, I did not have time for The Mall so maybe next visit. So no snow, but I see that it is cold there. Your like me here then, I should get out more and see more here.

DaddyC, thanks I will take you up on that offer if I get the chance to go back.

Dit, hey welcome to my little blog! I can't believe your picture on your blog, I was going to put up a photo of a field with cows because I thought that would be something you don't see on a gay blog but you beat me to it!

Kevin, I took the train down from Baltimore so I did not have to worry about traffic. Thanks for the warning in future travels however.

I went to college in Baltimore. It, like Washington, has some lovely areas and some bad areas. The key is to stick to the lovely areas.

Washington's architecture and museums certainly are worth the visit, and I think you're right about remembering the importance of its institutions. As our (well, not yours but mine) capital, it affects many aspects of our lives. Reconnecting with that from time to time is a valuable exercise.

DC is a great place to visit. And it never gets stale with the ever changing scenery with new buildings and monuments. Great pictures that you have shared. Thanks!

Jess, yes I was warned about the bad areas so I tried to stay out of them. I was in a nice spot in Baltimore but some of my coworkers were in an area where they would not go for a walk. There are areas here where I would not let someone wander into as well, like with every city, only here on a smaller scale.

Steven, it was really nice and I'm glad you liked the pics. It was my first time in the States.

I love the skating picture. I used to skate a little, but ice skating is a rare thing in South Africa. All indooe rinks. I did skate ourdoor while I was on holiday in Canada 10 years ago - I loved it. Trees decorated with Christmas lights and carols playing - it was magic.

Syrinx I would guess there is not too much skating in Africa! You can come to Canada and skate any time you want! Well just not from April to November if you want to skate outdoors!
Welcome to my blog and thanks for stopping by!