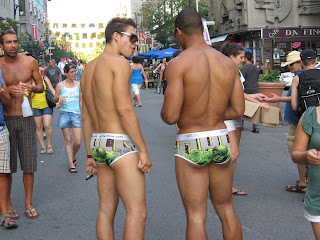 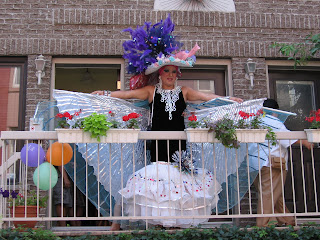 Oui oui Madame, you certainly have style. What the heck, uncle John is that you? Just kidding.
Posted by Sooo-this-is-me at 11:39 AM 10 comments:

Back on the hom-o front!

Things have been going really well between Dave and myself, in some way our separation has brought us closer together. Dave often comes to visit as I will have to stay with Mom until she sells the farm. Mom likes Dave, she of course thinks he is a really good friend but has had one too many shocks lately, so we will leave it at that. Dave did get to meet Dad once last year, that is important to me, Dad liked Dave, he had said to Mom later "he seems like a nice lad".

Last weekend we went to Montreal with two gay friends, actually we met one for the first time as he was on vacation from England, he was easy to talk to and we had fun. The city was having a diversity weekend, lots of cute gay guys around but I of course forgot my camera. If this sounds familiar to people who read "Sticky Crows" Torn's blog, it is because that is the city he lives in. This weekend is the Gay Pride parade in Montreal and we plan on going, mostly because the one in this city is a bit lame, three drag queens and a guy in leather harness, well maybe not that bad, there were actually two guys in leather harness. Any way we want to be with "family", our code word for gay people, Dave or I will say "family" when we think someone is gay, just a silly game we play. Dave and I walked around the city often holding hands, it no longer feels like a huge step for me, a long way from where I was two years ago. To be honest I would still be careful where we do that but Montreal is very open and if you are in the gay village area, no one cares. I laughed to Dave, pointing out that it is mostly straight guys holding onto their girlfriend's hand in the village, maybe they are afraid some guy will hit on them so they are trying to say "see I'm with a girl"! Sorry straight guys, it only makes us want you more! Muhahaha!

This makes me think that it will be two years this month since my first coming out, it just feels so right. I think how well it went, how good and understanding my friend was to me that day. I forget what a huge leap it has been for me, going from not wanting to say "I'm gay" out loud in case the walls might repeat the words, to walking around holding Dave's hand in public.

I confess we went to see strippers the last week in Montreal, well it is not like we do it all the time and heck, I've been a good boy all my life! At the end of the night one cute guy must have been a fireman because he pulled out a hose, we sat there dumb struck, I didn't know they came in that size! We still play the "cute guy game" as well, saying "7" or "10" when a cute guy walks by. I really feel the need to work out however when I'm in a gay village during summer. A friend asked if I was in hot shape, would I walk around with my shirt off? I am a total yes on that, I would want to show off the goods, I don't see any problem with that as long as I kept a healthy attitude about it. There are guys that are so hot, they know it, they show it, however they are sweet hearts and fun to be around and that is okay in my books.

Dave and I have been taking time to get away together, we have taken in a few sights as well. I feel now that it is just part of working at a relationship and no longer working at 'being gay' and I think this is a good place to be.
Posted by Sooo-this-is-me at 12:17 PM 8 comments: