It's Valentine's day, yeah.. have a happy blah blah blah!  No just joking, I'm not against the day, yesterday's post was me having a bit of fun. Some people like this day while some people call this just another Friday. Every year I keep hearing about surveys asking people to name a good Valentine's day movie. Hopefully it has finally changed now but for many years Pretty Woman was voted as the top movie for Valentine's, that makes me ill! Just what every young girl dreams of, leading the glamorous life of a prostitute until one day an extremely rich and handsome man sweeps her off her feet, where they live happily ever after. Like that happens all the time, as if!

I want to mention my own movie picks for Valentine's this year. I may be watching one this evening because everyone needs a little romance in their life, either on screen or real life. It's a bonus if you have a snuggle partner and can have the best of both worlds.

First pick is a gay film of course. There are many many good ones out there but I'm going with the latest one that really moved me. "Call Me By Your Name". 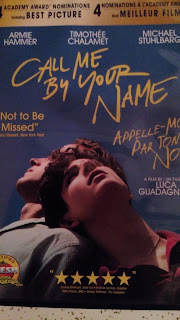 The last time I watched this movie, everyone in blogland asked me what I thought. It moved me in so many different ways I never posted my thoughts, it was too emotional to write about. I wish there was a movie like it when I was younger, although I probably would ignore the message. This time I'm just going to enjoy the relationship between the two men. I never take for granted being able to see myself being represented in film. It just feels wonderful to see our love stories finally.

My second pick is from the straight world of movies and I love it, I find it romantic. It was released in 1991 and it's called "Dogfight" starring River Phoenix and Lili Taylor (six feet under). 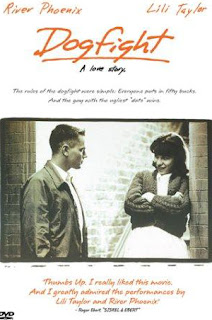 River stars as a young soldier about to go off to war in Vietnam. On their last nights in town, the young soldiers play a mean trick on certain women. They hold a dance and invite a date but the terrible secret is that it's a contest for the soldiers to bring the ugliest woman and win a prize. River meets Lili who is very plain Jane and also a little eccentric. He takes her out but as he gets to know her, he begins to fall for her, eventually she learns what his initial plans for her were and... well you need to watch the movie. 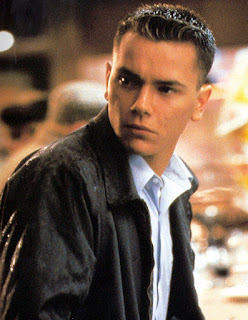 There you have it folks, my Valentine's day movie picks. What about you? Do you have a favorite romantic movie or two? If anyone says Pretty Woman you are getting half eaten chocolates and brown, dried up roses next year!
Posted by Sooo-this-is-me at 1:07 PM

My favourite romantic movie is, of course, "Captain America: The Winter Soldier."

Big Eden is a personal favorite. The original Brian's Song (I'm more into bromances rather than romances). If you're going for the holiday (I don't celebrate any of them), there's Some Like It Hot and The St. Valentines Day Massacre. Both feature the same mass murder. So romantic, heh.

"sleepless in seattle"
"send me no flowers"

my 2 faves; the first with meg ryan and tom hanks, the second with doris day and rock hudson.

"Food Of Love" strikes a chord with me. Parts are very close to my real life. But my all time fav is a Norwegian gay film called "Patrik 1.5".

Oh, Never again will I waste $12 on for a fucking Valentines fucking card!

My most favorite Valentine day movie of all time is a little French film called "Love Songs," and not just because Louis Garrell is in it.

Breakfast at Tiffany's for me. Although, I don't ever recall watching a movie on V Day.

Leanna, last night all chocolates were sold out at the stores I was in.

Debra, hahaha that's so funny that you say that because I felt that watching the movie!

Anne Marie, wow it's been many many years since I saw those last.

Jimmy, I will have to google them, I am not familiar with those movies.

Jimmy, I remember a Russian friend complained to the cashier that the little paper card cost four times as much as an entire roll of wrapping paper!

Dave, I will check it out.

Richard, it's been a long time since I saw that, I no longer remember it.
Yes I usually have dinner but not very often considering my dating track record.

Elizabeth, another movie I haven't watched in ages.

Woody Allen? *SHUDDER*! Give me the shark.

Ooooh, it's almost like being in the theater! The only Jaws movie that was better than the book.

Has anybody seen the Lurkster? Is he still in the corner? I really miss him. Should I get therapy? Why is the sky blue? Where do babies come from?

I just never understood why people couldn't just stay out of the freaking water! It's like, "okay everyone lets split up in this monster filled forest, we should be okay walking alone here at night, what could possibly go wrong"!

Actually very entertaining….and who doesn't want to see Chris Pine playing Steve Trevor getting out of a healing pool naked.

And I toasted you with a Valentine cocktail!

Maddie, you had me at Chris Pine naked. I loved the screen where Chris Evans joins him naked and they.... oh wait, that's the "inside my head" version of the movie, sorry my bad. I wasn't worried when you said wonder woman, I just thought you were looking for costume ideas! That's for toasting me! I took myself out for a sub and a coffee, sounds cheap but I still got lucky after! ;)