I was in a local discount store two weeks ago (Giant Tiger) and buying the usual things that I needed. I saw bird seed on sale for $6.79 a large bag. I had the choice between the yucky seed that nobody wants with a few sunflower seeds added in.. or a full bag of sunflower seeds which all the birds love around here. It was a good deal so I bought it. I don't believe in feeding wild birds for many many reasons, including bringing too many birds into one area. However it was the end of January, all the wimpy birds have left, only the real hardy ones remain and they are the local birds. 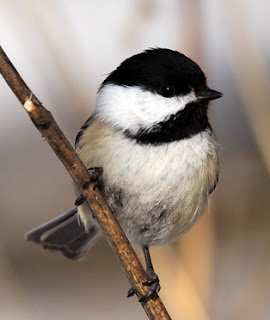 My main target is the Black-capped Chickadees, so so cute! A friend's son once said to me, "aww cute, they look like tiny Killer whales."I lifted this picture from another blog, so not my picture! I also have a devious plot afoot, I place sunflower seeds on the window ledges to attract the chickadees, then on warmer days, they catch the flies trying to get into the house, muahaha! I scatter the seeds in different places, this way everyone gets a chance. Besides the chickadees, I get Blue Jays, Buntings, some little grey birds, squirrels and even the odd crow. Everyone is hungry at this time of year. 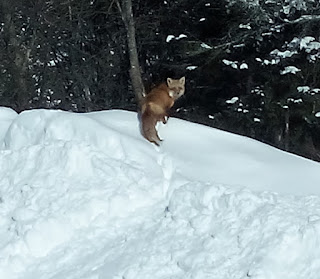 It's Lassie... my little Fox pup! You may remember her from fall pictures, eating the fallen apples. She looks great! I knew she was still around, I saw her tracks in the snow. The above picture is her playing on a snow bank, she was hopping around like young animals do. 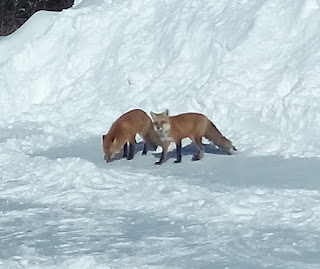 Lass was with another Fox, you can't see from this angle but the other Fox is much larger. I'm thinking she found a mate and they are pairing up for spring. Unless it's a parent but I don't think they would be that friendly now. I think a parent fox would try to drive her away now. 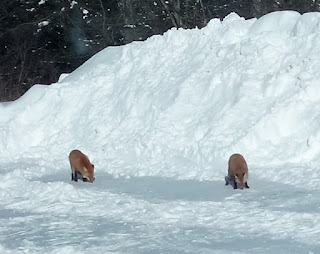 The camera makes them look far away but they are quite close to the house. Kitty is in the barn but I have seen them in the yard together and they ignore each other so that's good. I don't mind foxes around because they are very hard on mice and other pests, plus I no longer have small animals. I haven't been able to get any good bird pictures because country birds are skittish and bolt at any movement. They do however really chatter happily when they see me out with food, that's a warm feeling. I think entertainment wise, this was the best $6.79 I ever spent.
Posted by Sooo-this-is-me at 5:04 PM

After seeing the foxes, I was surprised you didn't say something like, "ah... my little chickadee."

are you SURE you weren't taking pix outside maddie's house?

Ha! I had the same thought as Anne Marie. That chickadee is so adorable!

I think he is trying to lure Maddie out of hibernation, or perhaps lure Maddie to his farm. Too bad Steven forgot to photoshop the GIANT SNOWBANKS out of his pictures.

Beautiful bird. And the fox is gorgeous too. And you’re right, where can you get that much entertainment for less than $7?

Well as you know, I get upwards of 15 different birds here and go through god knows how much feed. Most days it's a flurry of activity here. I go to the bird supply here for a mixture they make of the tradition seed, plus pieces of nuts and dried fruits. This was how I knew fox ate bird and sunflower seed. A friend of mine down south has three pet fox...yes...pet fox. She is an expert. She told me the reason I get so many foxes is one, because of the fallen bird seed from my sills and feeders, and because it's heavy wooded and along a railroad route, which they use for navigation. Their den is right at the woods edge of my complex. All most every night their under my sills eating.The other night was quite a ruckus...the females are getting cranky... Im sure are now pregnant as the young will come in between march and may.

I agree with Anne Marie and Deedles...they are keen observers.

And Lurky… Since Steven is so sweet I could probably over the snow drift, but I may get a limit of that much snow. But on the other hand, in the locale, we could be the first gay duo to have a nature show. Steven and Stephen's Big Gay Nature Show.

I miss feeding the birds. It was an annual winter event for me

What I'm going to tell you may sound kind of creepy, and maybe even a little "out there..."

WHAT if you could simply push "PLAY" to LISTEN to a short, "magical tone"...

And miraculously attract MORE MONEY into your LIFE??

I'm talking about thousands... even MILLIONS of DOLLARS!!

Think it's too EASY?? Think something like this is not for real??

Well then, I'll be the one to tell you the news..

Many times the largest miracles life has to offer are also the EASIEST!!

Honestly, I'm going to PROVE it to you by allowing you to PLAY a REAL "magical money-magnet tone" I've synthesized...

YOU simply push "PLAY" and watch as your abundance angels fly into your life... it starts right away...

CLICK here NOW to experience the wonderful "Miracle Money TONE" - as my gift to you!!