First, let me just clarify that I wasn't complaining about the warmer than usual temperatures over the last few weeks, just in case some weather gremlins happen to be reading this post. Last night was "EEEEK" degrees in wake up temperature, or -31 Celsius.. -23.8 Fahrenheit in normal people language. I'm not going out until April! 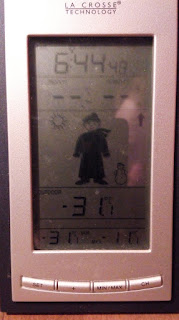 Very disappointing considering that Winter Pride was this week. I missed out on everything due to bad weather. Not that upsetting really, most things were geared towards younger people or didn't really hold a lot of interest for me. I think there is a Parade today but I have other plans so I'm not going to be there. Anyway at -31 it's not like I'm going to get to see skin, at that temperature, things could snap off!
Baby it's cold outside, this is the only moon you will get to see! Silent night, frozen night? 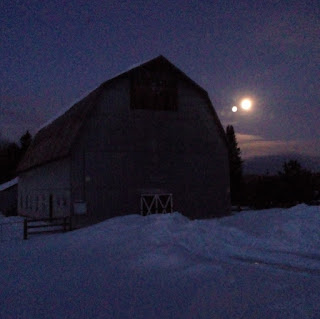 Are you lonely? This morning I was listening to the radio and they were talking about loneliness, a woman emailed and said she moved here six months ago and is incredibly lonely because she doesn't know anyone. I get that, to be honest I'm lonely most of the time, it's one of the reasons for being on here. It's also another reason I would like to have a boyfriend, I would enjoy the companionship.

The radio host did some research into the effects of loneliness and what she discovered shocked her. The effects of years of loneliness can be equivalent to smoking fifteen cigarettes a day, it shortens your life span, she said people who are alone and feel lonely, have a 26% higher chance of developing Alzheimer's or dementia, (that scared me). Naturally these people also have much higher chances of developing mental health issues like anxiety and depression. She said more and more people are reporting they feel extremely lonely, she also noted that it used to be mostly elderly people but that now younger and younger people are saying they feel lonely.

She then went on to talk about ways to try and combat this. That's the part I find really frustrating, people say they are lonely but don't want to spend one ounce of effort in trying to combat it. Fore example, I joined some social groups to get out more often, I felt I needed to take charge of my sparse social life. Some of the groups are LGBTQ community groups and some are not. Even though the groups may have a thousand people in them, I can't tell you how many times events have been cancelled because only three or four people signed up to go.

I think people are sitting at home waiting for the phone to ring, thinking that at any minute Brad Pitt or maybe Meghan Markle and Prince Harry are going to call "hey Mildred/Doug/Bernice, what are you doing tonight, want to hang out?" That's never going to happen so Mildred, Doug and Bernice should accept that and plan on getting together themselves for a movie night... but they won't. They will say that they are too busy but then will watch tv all evening. Other people claim to be lonely but want to argue with every point upon meeting new friends and end up driving them away. I remember my sister and her friend staying at a small boarding house for girls when they first moved to the city. There was a young woman there who complained about no one wanting to be friends with her. My sister and her friend tried to include this woman as much as possible in any social activities they did. After awhile they gave up, it was like a job trying to include her and she was completely uncompromising with activities. Some people need to realize they are isolating themselves.

Everyone is always marching around taking selfies and not wanting to meet with actual people. Nobody has time to stay connected but they have lots of time to watch hours and hours of programs on Netflix and think this is some great accomplishment. People thump their chest exclaiming they are their own best friend; however when a radio host asks if you are lonely, her switch board lights up with dozens and dozens of people saying yes, "yes I'm lonely".
Posted by Sooo-this-is-me at 10:54 AM

in between marriages, I got out. I went to concerts/movies by myself. the internet was not a big thing yet.

if you (not you personally, steven) cut yourself off from society, expect to be lonely. ain't gonna happen with me.

I'm seeing why so many Canadians head south for the winter. Your 'nub' must look like a second belly button!

I must be a rare one as I've never experienced "lonely". Perhaps it's from my time in a monastery.

Call and flirt with some of these guys you've met. Could be fun. And, don't believe everything you see, hear, and read. Look what we have gotten into in the US.

I am alone a lot as I work from home most days. At times I experience loneliness. I combat those feelings by going to the gym 4 to 5 times a week. I usually have short conversations with my gym friends because my main priority is working out. Social interaction comes second. Also, I hit the galleries on most Friday nights to see my friends in the art community and to check out the art. I've made a number of people who I consider friends. One has to be proactive by extending invitations. And usually in return, you'll receive invitations. I had no plans last night so I invited Morgan and his husband to dinner. I didn't want to spend another Saturday night eating alone. It felt good to get out and be with people. You may have missed winter pride but you can look forward to summer pride.

I agree with your rant, Steven.

Yes I am lonely. Most of my blogging is to deal with such.

I have been alone many times in my life, but it's never bothered me.
But then alone isn't lonely, because you can be lonely in a crowd.

A play about lonely people

I don't take selfies, nor am I lonely. I have dogs. I even have friends. But seriously, I'm really happy living by myself.

What? You skipped out on Pride again?? I thought we were past this. I think Mildred, Doug and Bernice are not the only ones making excuses.

Yes, I am lonely, but it is not surprising that a beta with low charisma would be. I realized this weekend that pretty much all the social interactions I have (outside of work, where I see people for two hours a day at most) are ones that I organize/initiate myself. I do attend some local meetups, but there is not much socialization at those.

So what you are telling us is that when you get laid and stop being lonely you will abandon us? Oh right. You already have.

I can see where loneliness could be in the rise. So many of the younger people have their faces in devices. They play games against each other virtually. I applaud you for getting out and socializing. For many introverts, like myself, it’s difficult to put yourself out there. If a person is unsure of themselves getting out is difficult but the rewards can be worth it.

Anne Marie, exactly if they won't make an effort, no one else can help them.

Jimmy, some people are just fine alone, I have been a loner all my life but I had family, that's all gone now so I need replacements lol.

Richard, yes I think what you are doing is the right thing, I'm trying to do the same. It's different however when living alone because no matter how much fun we have out, we return to an empty house.

Thank you Debra, I get frustrated with people, they complain about being alone but just mention getting people together and watch their face charge, I'm busy, that final episode is coming up, I don't eat after five, etc.

Dr Spo, this comment surprised me the most but things suddenly make sense to me now about you.

Bob, definitely yes, I often have posted about being alone in a crowd.

John, interesting title and I bet it's probably a touching play.

Dave, I believe you, I get a sense of an independent personality from you.

Lurky, snow blizzards and -31 are not excuses, no big deal the events were lame mostly or for younger people.
If you would stop being grumpy towards people you would have lots of friends. :D

HuntleyBiGuy, I was the president of the introverted club, now I'm just a director on the board so I get what you are saying. I agreed also with everyone walking around glued to a screen of some sort.

Sweetie, I went from sharing a room with a sister to sharing a house with a husband. I cherish being alone and am rarely lonely. If left alone too long I revert to being a cheerful hermit. Hugs.

Deedles.. gasp!!!! We can have you being cheerful! Although you're a funny happy camper it seems anyway! :D

Agree....you have to be willing to help yourself. Lot's of people never leave the house and just expect the phone to ring.

RB, yes exactly and even then they will say no.

Your Affiliate Profit Machine is waiting -

So, do you want to start making profits??

Get the full details here