I just got home and I'm having a late dinner so tonight I'm only going to touch on a few thoughts about the pride parade today, I will make a proper post about it tomorrow or Tuesday. First.. it.. was.. HUGE! I haven't gone for about eight years and I was utterly gobsmacked by the size of the parade. Also the crowds were incredible, thanks to all the straight people who came out to support us... and thanks for bringing hundreds upon hundreds of children, who will now grow up accepting of the LGBTQ community. The parade used to take less than an hour, today it started at 1:30 and finished after 4:00. There were times when I would look up and down the street and see nothing but people for as far as I could see. There were plenty of older moms and dads there to give love to lonely LGBTQ children. 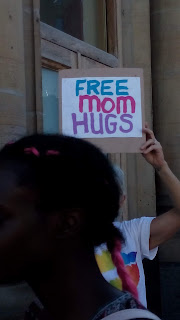 The Ottawa pride parade is a lot more tame than most pride parades. It is family friendly, a lot of the group's have children marching in them. My sister said something to me Thursday and it seems to be true from what I saw today. She said the Ottawa parade is boring because it's too political and too commercial. She said that's why she stopped going, she is thinking about taking in a larger parade next year like Montreal  or Toronto pride. True, I don't want to see a group of union reps protesting some work grievance or one political party sniping at the other. Even though I enjoyed the day, I personally wouldn't recommend anyone traveling here just to see the Ottawa parade, it was lame at times. There just isn't the floats or fabulous-ness you see else where. There are mostly groups walking, waving flags. You spend all afternoon watching groups representing the major banks, unions, insurance companies, Starbucks, political parties blah blah blah! I want to see drag Queens, I want to see men in leather, I want to see the gay hockey teams, I want big scary dykes on bikes! There were times when I felt that everyone around me and everyone in the parade were straight and I was the only gay person. Fortunately those times didn't happen long... 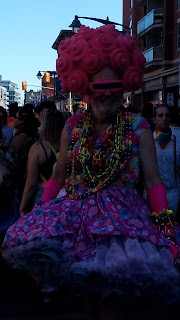 I was alone again, my fault; however I moved around where ever I wanted to. It's hard not to notice everyone else in groups having a lot of fun. Another thing that can almost ruin it for a person is smoke. I was so glad years ago when they started banning smoking from buildings, parks, public places etc. I hate the smell of smoke. Unfortunately since they made smoking pot legal, everyone does it everywhere. Even though I was outside yesterday, I could smell it in my car this morning. The car was parked off site, my clothes absorbed the stink enough to transfer it to my car.

I never saw a single person I knew, it's possible that we didn't cross paths but I remember a time when I would meet a lot of my friends. The old farts probably didn't want to come out anymore. I was thinking how opposite of the old days. I used to be terrified of meeting someone, I remember once almost bumping into a friend of a friend. A huge drag queen stepped between us and I slipped away before being seen, scurrying home before I was outed. Now I don't care at all. I was hoping to see a bunch from work, there are a group of guys I was suspecting to be gay, I thought they might be there.

I decided to leave after five, the crowds were large and I didn't feel like waiting an hour for everything. You can't dance alone and if you talk to someone they think something is wrong with you. Another thing that was very pleasing, at the end of the parade, we didn't have the usual haters with their signs and bible thumping. Although some people came prepared with some songs of their own.. lol. 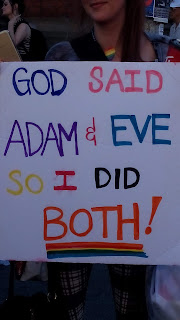 Oh and did I mention about the gay firemen... gay firemen people.. gaaaay fire..men! Get that truck over here because I think I'm melting! 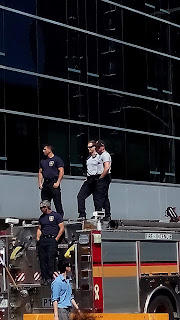 It's too bad the picture didn't include it but they had a huge rainbow flag bolted to the back of the truck.

I suppose it is a mixed feeling to see more straights than gays at a gay pride parade; I am glad so many types show!

It's good you got out and supported the parade. You can come to Denver and see all things you want to see in a Pride Parade. I have friends who has been a fireman for almost 25 years. Being gay was never an issue and he looks hot in his uniform.

Did you indulge in some mom hugs?

Your car smells like pot because your clothes "absorbed the stink", did they? Is this the excuse you are using now?

I am not surprised the pride parade was super-corporate. Next year you should go to the Dyke march. You'll probably see fewer corporate floats and more lesbians on motorcycles.

Your next task is to borrow the souvenir you got for Teddy and wear it to work for a few days.

Fabulous and wonderful! Great to hear there were hundreds of children there. Xx

those fire fighters are HAWT! the "adam & eve" sign is cool too.
nothing stopping you from going to toronto or montreal now!

Our Pride parade is next month, when it's not so hot, and we go about every year and love the diversity of the crowds. I love being part of that kind of community!

Dr Spo, yes definitely mixed feelings! On one hand I'm really appreciative of the straight support but there were times where I felt, "this is our time, stop taking over".

Richard, there were many men in uniform there, they mingled with us after so they were definitely gay and... hot.. as in really hot!

Debra, FYI the woman holding the sign was hot.. as in really hot!!!

Lurky, I was thinking about it but I don't need it, some of the kids do however. There were a lot of moms and dads offering free hugs.
No joking, I was wondering what would happen if I was stopped by the cops. "Sir, step out of the car please, we smell marijuana"!

Christina thank you, there were also lots of gay couples with children, even though I am constantly told that can't happen. Lol!

Anne Marie, you should have seen some of the soldiers, navy men, paramedics etc... whoa!!!
I have been to Montreal many times, it's a really good parade, it was last week. I would go to Toronto if I can get a group.

Bob, I was wondering if we were the last ones, September would be nice, the weather here was great sunshine wise, a little too hot at times but better than rain. Nothing sadder than a skin soaked drag queen! Lol

My favorite part of your post is where you talked about moms and dads giving out hugs. There is good in the world!