The bean harvest & other exciting news!


One of the things I love about summer is having a vegetable garden, I love fresh veggies, unlike in the stores they have... what's that word.. oh yes.. flavor! On that list of fresh vegetables is burgundy Bush beans. Like yellow beans but less woody, slightly better flavor and they keep producing from mid summer until frost. This spring it was an adventure finding the seeds. Most stores didn't carry them this year for some reason and by the time I found some, it was getting late in the year. After running around from store to store, making a garden bed for them and sowing the seeds, I came inside to put the extra seeds in the cupboard for a second planting in two weeks. When I opened the cupboard door, there was a full packet of seeds already sitting there. I apparently bought extra last year and never thought to check d'oh!

One of my friends asked me if I had planted my purple beans, (they actually look more purple than burgundy) I answered yes and took this photo of my little bean plants growing. 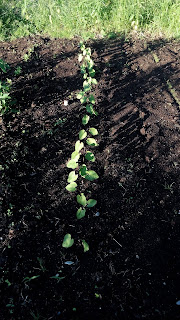 I was so happy with my little bean-e-babies. UNTIL!!! Da da dummm! Here's the dramatic part.

Something wicked comes our way!!! 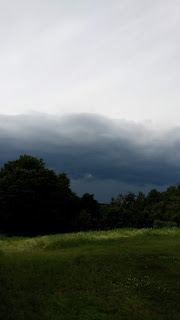 What is that! It looks bad! Run for your lives! Thunder! Lightening! Heavy winds that destroy trees and... hail, lots and lots of hail! 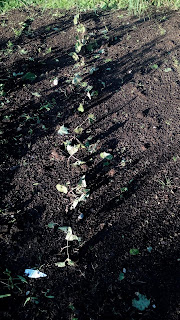 Where's my beans! There was no joy in beanville that day, only sadness, call a veg-terinarian! Look at my poor spinach in the following picture, can you even see any! 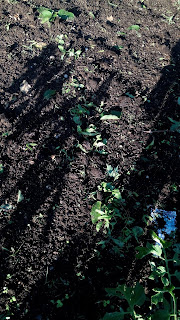 Anyway, I didn't touch anything for about two days, by then the plant will begin to either recover or it will have died. It looked like the cast of Riverdance did a scene run.. through my garden. :(... 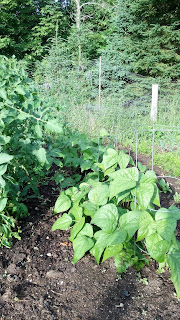 After about two weeks you would never know something happened to them. 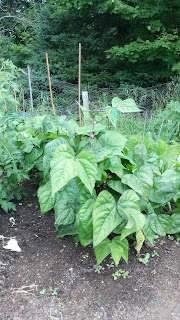 Now they are a little bean forest and doing well, the second group I sowed is almost as big as the first group but best of all, I was able to eat fresh burgundy beans yesterday, yum. 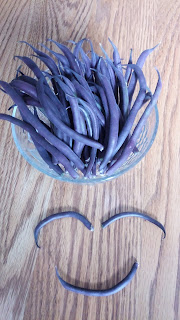 My happy ending to the bean saga.. and as an added bonus, with these beans there's no tooting! The end.
Posted by Sooo-this-is-me at 10:08 PM

I have never had those before. Last trip at the farmers market here, I got some snow snap peas and some green beans. After I clean them, I eat them raw and dip them in Caesar dressing. OMG so good.

It's funny how fast things can grow. My aunt's has a huge herb garden and she says it's off the hook in this weather....more like a herb forest.

Maddie, yes there was a good combination of rain and warm weather, that really boosts the growth rate. These beans turn green when you start to cook them.
I don't know what snap beans are but if you are eating green bush beans raw, everyone tells me it's bad for you. Apparently the hairs on the raw beans can cause harm to your throat and stomach.

What the heck are those things! They're BLUE!! Alien veggies! Dr. Seuss rejects! Suffocating green beans!
Anyway, I've always loved your atmospheric weather pictures. I'm also having another memorial service for my most recent houseplant death. I feel like a serial killer.

Deedles: those aren't alien veggies. They are just a rare hybrid created by a lab in China. Scientists inserted human DNA into ordinary green beans and this was the result. This is why they are called human beans. Also you shouldn't feel like a serial killer. At worst you are a negligent parent.

Steven: you do too know what sugar snap peas are. They are the peas you eat shell and all. I think of snow peas as being the very thin ones with underdeveloped pea seeds, and sugar snap peas as the regular peas with edible pods.

Also, this was a very dramatic story. For a minute I thought a groundhog was going to make an appearance. But hail is bad too. Fortunately, in my experience bush beans don't give up easily. Unlike other less resilient vegetables (hello carrots) they don't shrivel up and die when faced with adversity.

Ohhh I see you’re showing off your talents in horticulture? Who knew?
I thin it’s fantastic that you grow your own veggies! Totally awesome. Btw, I love how you framed this. The thunder, the suspense. And then the veggies!
I like your style.

Deedles, they are blue because it's so cold up here! :D
I think technically you are only a cereal killer if your plants are wheat, oats or barley! Ba-dump-dum!!! I'm here til Thursday, try the chicken.

Lurky, see above comment to Deedles! Actually I have never tried those bean you mentioned. I used to grow snow peas and I love them but there is a virus around now that prevents me from growing them anymore. Yes, hello carrots, especially if it turns dry after you sow, watering doesn't help. I find the only way is to dump a couple of seed packs into the bed and thin them out later. Otherwise everything eats them when they first start growing. Human beans, brilliant really, you are commended for that one : )
I have had groundhog problems in the past but it's a catch 22 situation for them when they find an easy lunch in my garden. See what I did there???

Anne Marie, yes that's what we always used to call them, string beans. We used to grow the yellow ones but after trying these I switched.

Sixpence, who knew the lives of bean plants could be so dramatic right? I have a green thumb and enjoy the hobby, plus you get to eat this hobby!

Richard, you should put it on your bucket list of things to do. Lol

At his time I would like to thank Old Lurker for making me feel better about my planticide. I would also like to offer my forgiveness to you, Steven, for that awful cereal killer remark.

Deedles, yeah Lurky! Enabling plant abuse everywhere. What? Darn.. I should have recommended the fish.

Fish would've gotten you condemnation and total shunning for about a month!

Deedles, did I say fish? I meant to say fsteak, umm that's how we say it in Canada, fsteak because I wouldn't just make something like that up. Nope not me.

Okay, I'll pretend to believe you. Fsteak sounds like the perfect food to go with asphyxiating green beans!

Enabling plant abuse? Hardly. When parents are negligent towards their plants they lose custody of them -- the Horticultural Society smashes in their doors and takes the poor flora away.

It does not surprise me that you treat groundhogs with extreme prejudice. I think every farmer I know treats them the same way. I used to protect brassicas with row cover, which helped because the local groundhogs weren't very smart. But even though I am fully aware of the damage groundhogs inflict I still feel bad for the obese gluttonous ground squirrels.

I am mad-jealous; I miss gardening.