Just another short post this morning. Speaking of signs at the parade, there were many, some hilarious, some thoughtful, some straight to the point (no pun intended). 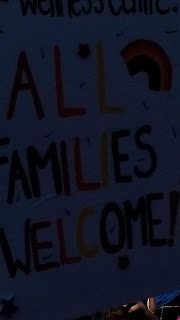 There was a different kind of sign however and it made me feel really good inside. There were no news cameras anywhere that I could see, no reporters, no journalists.. nothing. Probably at some point the media came out for a few sound bites but otherwise stayed away. A sign that the pride festival and parade is something no longer news worthy, not like some kind of street riot, this is the way it should be. Of course the early coverage did help get the message out but the feel of it was predatory at times.

I remember in the early days when I was really uncomfortable with my sexuality, that was one of the annoyances. News crews would be running up and down trying to capture the freaks on display. You could hardly sit down without a camera suddenly being shoved in your face.

"What do you see Bob"?
"Well Kent there are a number of homosexuals eating on this restaurant patio, it appears that most have ordered the salad with their meal, clearly this must be some kind of sexual signal"!
" You heard it here first folks, we will be keeping an eye on this story, next up is Janice and her unbelievable story about a lesbian that has never been to Home Depot"!

HA! My first coffee spurt of the morning!

I wonder why they weren't eating sausages?

were there cucumbers in the salads?

You will notice, Steve, that I didn't even mention phallic food, such as cucumbers, sausages, zucchini, bratwurst, and the like. I'm a good girl, I am! I'm not going to even try to figure out where a radish fits in, so to speak.
I must say, trying to prove I'm not a robot is getting bothersome!

In a way, it's good that the camera news crews weren't there. It's true, they do look for the ugly side of everything and then report on it over and over like it's the greatest thing. So sad.

That story about Janice does sound pretty unbelievable.

Wasn't there a tonne of coverage about your/Ottawa's mayor coming out? I am sure there was coverage of him marching in the parade? (Also: maybe you should follow the Ottawa mayor's lead and come out too?)

Deedles: I feel your pain, but imagine how difficult it is for us robots! I had to go through seven or eight rounds of traffic identification once, just to mock Steven on his blog.

Lurkster, I'm sure you'll agree that the mocking is worth the trouble! I have a problem with the traffic light ones. Do they just want the tops or the whole poles? Not to mention, sometimes I don't have to prove myself and other times I have to prove it at least four times. Mother botter, just take my name and record it! Holy hell, this time it was murky, blurry statues!

Salads, eh... years ago at the Central PA Pride Fest is used to be the color of your snow cone.

I thought everybody just wanted the tops?

Lurkster, that may well be, but a lot can be said for a good pole.

Depends on the pole, I suppose. Apparently in Britain a lot of people are upset at the number of Poles in their country. Maybe they would prefer tops?

LoL the sale bit was excellent.
And I think you’re right. It’s hot ‘news’ anymore that there’s a Pride parade, so the lesbian moms and dads can strut along the leather daddies.
As it should be.
XoXo

Went from fire island to the mountains this weekend. Now back to work briefly before heading to Rehoboth Beach for a lonnnnng Labor Day...

Sad to say, but the freaks often get the most press.
Not that there's anything wrong with being freaky.