The writing is on the fall.. um wall.


This week I can really feel summer shifting towards the end. There is that chill in the air, even when it is hot out, it's hard to explain but there is a certain chill in the air. We were supposed to have hot humid days, there has been some humidity but no real heat until today. Yesterday was a real wakeup call regarding the impending fall, even though it was hotter than normal and sunny all day, when I walked out barefoot, I was shocked by how cold the ground felt! It made me jump a little. Today the ground was warm again. The other difference is when night comes, even if it has been extremely hot during the day, the temperature falls below 50 Fahrenheit or 10 Celsius. However I actually like that about this time of year, it makes it easier for sleeping.

Instead of picking veggies in the cool even at eight, I'm coming in for the night, the sun has well set by eight o'clock now. Time to release kitty for her night shift. 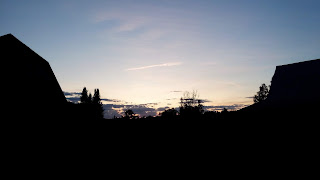 During June and July, it wouldn't be this dark until ten at night. No sign of leaves turning yet. I see all the tomatoes are planning on ripening at the same time, grr.

This morning I noticed it very quiet, not until a crow started squawking that I realized it was because no birds were singing. Actually for the last week they have been flocking, getting ready to leave. The only thing chirping now is crickets but I love listening to them as well.

Last night I heard a whip-poor-will, for those not familiar, it's a little night bird with a beautiful repetitive song, sadly they are dying out. The last time I heard one was ten years ago when dad was ill, I recorded it for him to hear. When I was really young, I would listen to them at night, their song was magic and kept away the monsters somehow.

Speaking of going outside barefoot on the cold ground, it's funny but starting last year, I love running around everywhere barefoot. I never could before. Some gingers it seems, have three times the nerve endings in their skin, making them super sensitive. That explains a lot for me. When we were kids, my sister and cousins would pull off their shoes and socks and run around the yards playing tag etc. Not me, I couldn't understand why I couldn't do it, to me I was walking on a patch of thumb tacks or broken glass, I could feel every thing under my feet. Ouch! Oooch! Eeech! Oooch! Ouch! That was pretty much me for the one minute I would try. Now as I get older, I don't feel it as much. I love walking in my garden barefoot, especially on warm days, I feel connected to the earth. It also sends stimulation constantly to the brain I find because of the difference between walking on grass, earth, sand or gravel. You don't get that sense of stimulation from shoes.

I wanted to include the whip-poor-will song, sadly one day, recordings will be the only way to hear one.

No! No fall! No no no no no. I know this is the same response I write every time you mention the Dark Days approaching, but I don't care. No!! No no no no no!

you're a ginger? I think gingers are HAWT! like prince harry - WOOF!

I want to think that fall starts in October, but hey. I’m in weather denial.
Walking barefoot is indeed a sensory treat. We do it so very seldom! Gonna try it sometime.
Pity the birdies are going extinct. Probably their habitat is being reduced.
You’ve made me a little nostalgic. I like that.

Living in the stickiness and heat of South Carolina, I am ready for a little Fall.
I don't know why, but I am almost always barefooted at home, unless it's an especially cold day. I prefer bare feet to shoes any day.

Thanks for that Post.... it brought back a lot of memories.....of years passed.. barefoot, Fall is coming, The Air feels....

I am so ready for fall, rain and gloom! The season would match my mood. I used to run around barefooted as a kid all of the time, until the day I jumped on our ugly, mustard yellow shag carpet, and landed on a sewing needle! Fifty some odd years later, I still can't figure out how a needle ended up there, and subsequently halfway into my foot. After that, only on the beach were my feet bare. Now with diabetic neuropathy, it's best for my tootsies not to be nude.
By the way, that bird sounds obnoxious! One person's peace is another person's war, I suppose :)

I didn't know that some Gingers have more nerve endings. You know where my mind went when I read that line. I never lived where there were whip poor wills. I now know what they sound like. Thanks.

We are just approaching the height of Hurricane season. Hot and humid for twelve more weeks (at least).

Anne Marie, I think you're slipping, yes I'm a ginger, you keep asking me about drapes and carpets! Yes we are hot! :D

Sixpence, I'm not in weather denial, I'm in weather dread!
The whip poor will was affected by DDT but also they tend to make their nests in the gravel by roads and apparently fly into car headlights because they are a night bird.

Bob, when it's hot, I can't stand that wet foot feeling of sweaty socks.

Deedles, sorry I meant to warn you about the noise. They don't sound that harsh, they would have to be sitting beside you to be that loud. You have to try and imagine it calling off behind a hill or in a forest somewhere, much less ear splitting and more melodic.
You take care of yourself, yes I know the danger for people with diabetes.

Richard, the same place mine went when I wrote it. I read that, I did notice I was always more sensitive to pain regarding my skin. I assume a natural guard against being in the sun too long.

Jimmy, I prefer winter to hurricane season now that I think of it. I don't mind hot, I can't take the humidity.