I have been procrastinating about getting new glasses, I damaged my old pair and have been using a really old pair for the last two years. I also needed my eyes examined, it's my inability to make a decision that let it get this far. I kept thinking that I might try laser eye surgery but I am hesitant to do anything regarding the eyes. One of my aunts keeps going blind, she has had three implants but they stop working after a year and it's painful to see a once active woman, look defeated, I don't want to go down that road unnecessarily.

I had an appointment yesterday, everything seems fine, I was a little worried as I noticed some differences in vision. He said my vision regarding distance probably won't change much as I get older. Yes the doctor was a male... and yes he was attractive. He had slightly greying hair but I like that, I could tell he is probably close to my age but still has a young look to him. He was friendly and explained everything really well.

Then came the hard part, picking out a frame, they were having a two for one special so I got a pair of sunglasses as well. Picking out a frame is so hard because it's not like a hat that you don't like later on, your mistake will be on your face every day, you can't leave your glasses at home if you don't like them. I got tired of looking and picked a frame that is not too obvious, the trend of the retro style with large frames looks good on some guys but not me.

I went shopping after to give my eyes time to recover from the drops. The optometrist said that it's a cloudy day so I should be fine. As soon as I stepped outside, the sun came out full force and I imagine that's what an owl must feel like.

I went into a nearby candy shop and thought of Debra "She who seeks" right away, they had candy unicorns! So I bought some... because that's what gay people do, it's a calling. They came in all pretty pretty colours lol. 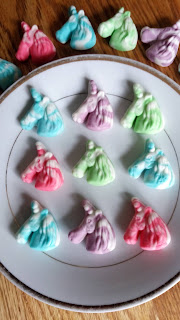 To be honest the taste is something that I would describe as being, "acquired" to put it politely. I went to a nice restaurant and treated myself to a good dinner.

After dinner I went to do a little more shopping for things I needed.  People kept staring at me startled or surprised, giving me strange looks. I checked myself out in a mirror to see if I had food on my face, lol it was because of the drops, I forgot, instead of this : ) people were seeing this O_O  they must have thought I was high on drugs or a vampire. It made me think of a cat at night.

They said the sunglasses take longer, up to four weeks, which is too bad because I would have liked to have them for pride so that I would look cool.. while everyone ignores me. My procrastinating was always an issue. Just last week I finally got my kindergarten project done!

Candy unicorns! Too bad they didn't live up to expectations. I see an ophthalmologist regularly and so my eyes get dilated regularly too. I always wear a great big pair of old geezer wraparound sunglasses afterwards because sunlight hurts! Then I have to stay in a darkened room for a few hours.

That's such a big letdown regarding the candy unicorns. They looked so good and cute too. I need to get my eyes checked too. I always take my oldest pair of glasses in with me to turn in so I can keep the style I like and just get new lenses. It's sooo much cheaper even if my insurance covers everything I still love my old rims.

I find any kind of unicorn is an acquired taste! I never acquired it, even as a kid when the real ones missed boarding the ark.
My implants (my eyes are up here) have been going strong for seven and eight years, respectively. I've been getting eye injections for about three years now. Not for sight, but to treat aneurysms and hemorrhages, yay. Laser surgery would come only if the shots didn't work. So far, so good.
What color are your eyes, anyway, for people to notice that they're dilated?

I went to the eye doctor last week but have not picked out new glasses. I'm a procrastinator too.

I hope your optician is more competent than mine. I had my eyes tested, chose two pairs as they were 2 for 1. Same prescription. I went to collect them last week. One pair perfectly fine , the other blurred as ****. The assistant suggested that I just needed to get used to them. I repeatedly said that they were the same prescription so they should both be the same. Long story short......they had let the lenses in the opposite way around. No apologies just lots of laughter!
The sweeties look yummy. I do have a sweet tooth..I may even have bought sweeties for my grandchildren and ate them myself......

No checking out the optometrists! They are not there for your objectification!

Speaking of which, you need to post some photos of you wearing those new glasses so we can judge how suitable the frames are for your face.

Hi Debra! I hope you had a good vacation. Did you see any wildlife there? Bears? Otters? Silver Foxes?

my eye exam is on 8/27. sorry the pretty unicorns sucked (and not in a good way).

Yay for new glasses. I usually get a pair every year or two. Hate the exam cause it’s horrid to walk around half blind.
And I agree with Lurkie. We’re gonna need photos with the new glasses. STAT.

Picking out new glasses is hard. I took my son with me last time he was home so he could help me pick out a "hipper" pair. I wear contacts most of the time, but occasionally I will spend a day in my glasses.

Debra, I drive with old geezer sunglasses, they fit over my regular glasses and are so convenient. Good thing you see an ophthalmologist, if you couldn't see him, then he's not very good! :D Miss my bad sense of humour when you were got???
Yup too bad about the candy, makes me think about making my own unicorn treat.

Leanna, if I could find my last pair, I think the frame is still good and would do that for a second pair. Good idea!

Deedles, my eyes are black like a cat at night, so it scares people lol.
If I'm looking down instead of at you, I'm probably just wondering what those Dolly Parton things are.
Unicorn meat gives you rainbow gas, you'll have colours flying out of you!

Richard, I was going to write a big response to your comment.. but I'll do it tomorrow. ;)

Christina, well you know my luck, they will either give me the wrong prescription or it will take two months.
I have a sweet tooth also.. yum!

Lurky, men get upset when told not to look at women, so I'm turning the tables in the name of fairness!
Nice try with the pictures Mr I want to know everything about you but you are not allowed to know anything about me! :P

Anne Marie, I have to wonder how a company screws up candy! Seriously, it's candy, how hard can it be to make it taste good!!! Hope you have a sexy eye doctor too! ;)

Sixpence, yes lol it's like you suddenly became a vampire and the sunlight is burning you! Hmmm, I don't remember seeing a picture of you, I don't even know your real name! Well unless it's sixpence.. then I need to have a talk with your parents. Lol

Michael, lol.. I was thinking that I should have brought one of my younger friends, they are quick to judge and would keep me looking from looking like a nerd... or should I say.. more nerdy. :D

Steven, dearheart, I was talking about EYE implants! Sheeesh!

Deedles, what? Where you expecting me to "not" say something smarty pants-ish? Have you met me? :D
I'm not sure why but my aunts eye implants will work for a while then stop after a year and she goes blind again.

Steve, does your aunt have cataracts or something else? I was offhandedly told that I had cataracts and was legally blind. I was like "Huh?". I just thought I had fuzzy night vision. Fuzzy nights are awesome! I digress. I see fine now. Everybody reacts differently to different treatments I suppose. My aunt is 81, and sees perfectly. She can't hear worth anything though.

Deedles, she did have cataracts and I believe got glaucoma. I was worried about having something because it's getting harder to see at night, fortunately he said I'm just getting old... umm.. I mean older, ya that's what he said.. older.