Did you know that onions flower? They will if you leave them a second year. I didn't pull all the onions out before the ground froze last fall, some came back up. They will divide and flower but you are supposed to stop it. I let someone flower, just because they have cool flowers. 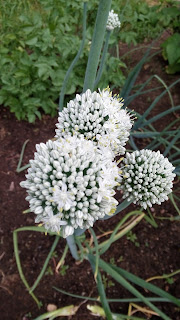 Washing machine massacre!!! I posted before about not wanting to throw out comfy clothes items, this includes hats. I decided to try washing one of my favorite caps. I have washed it in the past but this cap is really old. It was my Dad's special cap, he would only wear it to go to a country fair or something along those lines. When he died, I took it and wore it to work every day until it turned yellow and became worn out looking. It didn't survive the wash. :( 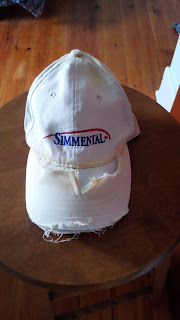 Thanks to everyone's tips, I made perfect bacon! Crispy and delicious, I am a master at making bacon. All the years of burning it and nobody told me the secret! Anyway now I can do a breakfast and not be worried about my bacon. 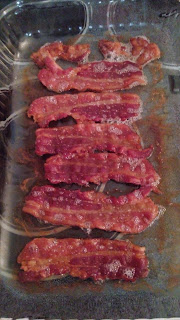 Speaking of onions, my garden is doing well, I didn't really plan on having one, maybe just a few tomatoes and spinach etc; however vegetables are so expensive here lately and they are tasteless. I decided to scale back and often "less is more". There is not a lot of up keep with the way I planned it. I try to have at least one meal a day that is 95% from the garden. 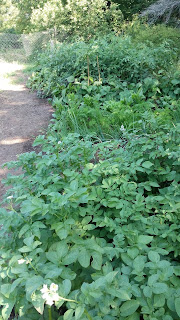 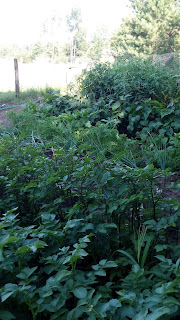 I miss not having cows but I just don't have the time, my neighbour keeps some of his here for the summer. They keep the place clipped down so it's good to have them around.

"Be sure to get my good side darling". 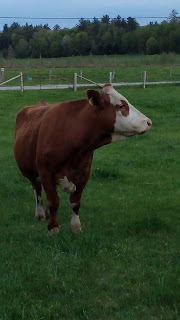 A few days ago, after a hot muggy heatwave, the air turned cool and dry, that cool dry air hit a cold front and before my eyes in a matter of minutes, created this line of clouds in the sky, the sun was setting which made it even prettier. 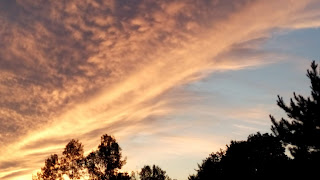 That's when this heavenly being appeared to me and told me that God loves his little  LGBTQ children and that's why he made them so fabulous! 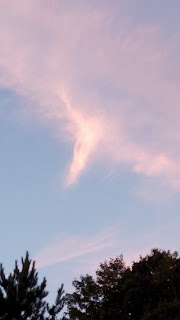 Your garden looks big. I envy anyone that has a garden right now. I miss gardening. I love that last picture. Looks like an angel.

Tomato pie for dinner! A southern delicacy. I didn't know they had hicks in Canada. :)

I could go for some tomato pie.

I learned the hard way that I should not wash hats in the washing machine.

When is your breakfast party? Are we invited?

You don't need an entire herd of cows. Why don't you get just a few cows? (And how do you tell the meat cows from the milk cows, anyways?)

I had chives bloom in my garden but I've never grown onions. Looks cool!

First, that cap looks just right: it looks like it can tel a thousand tales. I’d wear it until I literally falls apart. It’s your cap. It’s your head. It’s nobody’s business if you wear it but yours. Wear it.
Second, your flowers and plants make me happy. I have apparently developed a taste for plants, and being an urban dweller that makes me a weirdo. LoL. I’ll live vicariously through you, Stevo.
Lastly, the photos of the sky are awesome. Really awesome.
I like your random thoughts, btw.

I did not know onions have flowers. I don't like onions and they don't like me. FABU sky pix!

John, I love it when it's blue and welcoming, not so much when it turns black and scary. Lol.

Leanna, it used to be much bigger. I don't use a lot of the space anymore. There's just me now and with working in town I downsized. It was an angel, and she revealed three things to me.

I have never heard the term tomato pie before, is there a joke in there or is this an actual dish?

Lurky, I have washed them before, I used to even have a thing that kept their shape. That hat saw better days.
Yes you are invited, how soon can you get here?
You tell cows apart by breed, some are for milk and some are for meat. If you grow up around cows you can tell what breeds are in her even if she is mixed.

Richard, onions are one of the easiest things to grow.

Tommy, yes thank you, it's been around, passed down from one generation to the next, an heirloom almost lol!

Sixpence, I have sent the hat to its final resting place. I have used it to the maximum lol.
Do you have a balcony? I need to dig out the photos of my balcony when I lived in the city. It was green thumb intense lol.
The sky was amazing that evening, I was mowing the lawn and suddenly the sky started to form this line across it from west to east. Thank you.

Anne Marie, hold the onions!!! I love onions but I know a lot of people can't eat them. The sky was amazing that evening, the pictures didn't do it justice but thank you.

Bravo about the bacon!
Let it inspire you for whenever you think "I can't do that, it's impossible' to 'remember the bacon' and do it.

Dr Spo, bacon inspiration? Yes, I'm on top of the world! I can do ANYTHING! However I'll start tomorrow. ;)