I was thinking to myself the other day that I was being the usual stick in the mud and not taking part in any of the g'activities this past week. I couldn't get anyone to go with me so last night I said screw them.. I decided to take in the LGBTQ street fair today. Two streets were closed down and there were a lot of booths set up.

As usual at any LGBTQ event, there is a number of gay bears! 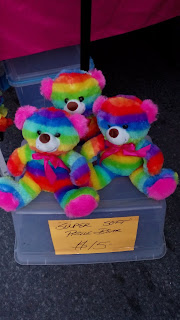 There were some good acts on the smaller stages, they had the gay men's chorus and two young girls that could really sing well. On the main stage they had a d.j spinning tunes. 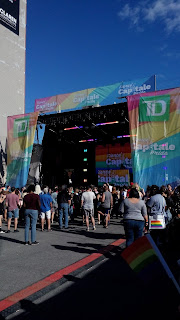 There were also two drag shows going on. One at a smaller stage with local queens which was entertaining, also there was one heck of a kickass show on the main stage, it was freaking awesome! These ladies meant business! 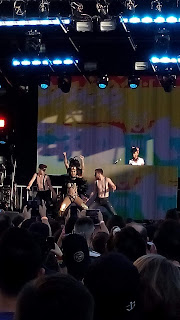 This next one was my favourite, she came to conquer! Very out there, very theatrical, brilliant! Like Maleficent and a drag queen had an offspring. She did her route to the Todrick song, I like boys. 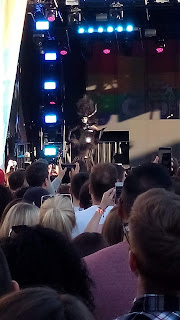 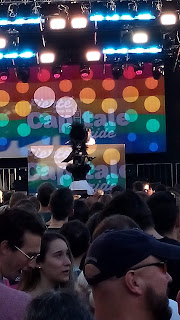 Sorry I couldn't get closer to the stage, a lot of the pictures didn't turn out, too bad because there were some other really good acts.

There was a queen from Montreal, the outfit demanded attention! 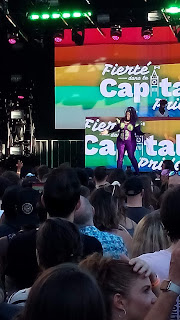 The main guest of the evening was the 2018 Drag race winner Aquaria, some of you probably have heard of her. I have never watched the show, nearly lost my gay card over that one today. 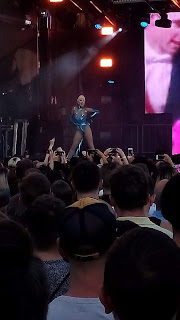 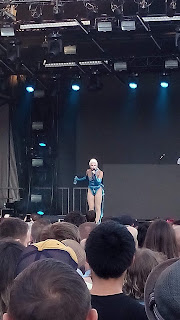 During the day, I couldn't help feeling like I was back at square one, here I am alone at pride, just like before I came out. However I can't hold a pity party, I procrastinated over making more friends and this is the result. I also felt my age there, most people were thirty five and younger or at least it felt that way. I did get a few looks and one guy really checked me out, I mean really checked me out! Like a wolf looking at a lamb chop! He wasn't my type, his eyebrows were plucked and I think he might have had a little male makeup on. He was however very good looking and younger than me, made me feel good inside, I still got it. :D

I was thinking about buying a gay teddy but I already have a teddy bear, we have been together for thirty years. Teddy was given to me by a friend who would later come out to me as a lesbian, so there is a gay connection with him, feeling guilty I brought teddy back a little gift from this afternoon. 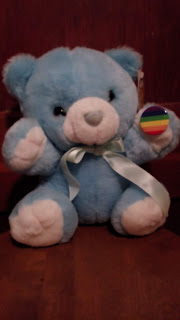 I enjoyed running with the herd today, so I'm returning tomorrow for the parade, gay night everyone.

I'm glad you went to the street fair and glad you're going to the parade tomorrow! Lots of people go stag to Pride. (Does using the phrase "go stag" mark me as an old fart?)

Good on you for going. We were going to be so mad if you skipped out. Now we only have to be half mad because you skipped all the weekday events.

Be sure to wear an appropriate sandwich board to the parade tomorrow. Have fun! Don't do anything Maddie wouldn't do.

I am PROUD of you for finally getting offa yo ass and getting out! only YOU can help YOU!

Alone at pride
But you WERE AT PRIDE

Good on you for going and having fun.
Being OUT there is the best feeling ever!

Debra, well am I marked as an old fart for understanding what you meant! Lol, fear not sister Debra, a new chain of sex shops that opened was there giving away free stuff as a promotion, it is called, The Stag!

Old Lurker, there.. happy now!?! Lol, I'm teasing you. I have to be careful because sandwich in gaylish means a three-way sex position.

Anne Marie, so.. you mean the ass-less chaps wasn't enough?
Thank you, and yes I kind of suck at helping me.

John, I didn't really mind being alone, I've been a loner all my life and this way, I see what I want to see.

Bob, yes and being out surrounded by other LGBTQ people feels even better.

Today, take lube and condoms to the parade. Be prepared for anything!

Jimmy, they are handing the stuff out everywhere!

Running with any herd scares the living crap out of me, but you go ahead and get your jollies, Gingersnap!

I hope you have a great time the Pride Parade. Never underestimate the allure of an "older" man. Accept the attention. You don't have to act on it. Just know you still have it.

Mind, you had better watch it about the "not my type" stuff, lambchop. Keep dismissing guys because they shape their eyebrows and wear a little manly War Paint and you'll end up with Sixpence blogging about you.

The queen from Montreal looked liked she might be auditioning for 'Cats.'

Hope you had fun!

Glad you went! There is nothing wrong with being a loner. I get it...I like to be alone too. And the good thing is that you were surrounded by your people!

Deedles, your herd probably comes with one of those granny scooters so you'll be fine. :D

Richard, nobody looked at me today, oh we hello humility.

Old Lurker, if I wanted a girlfriend then.... how's that for sh.t disturbing?

Dave, she was a pretty solid person, her booty bumped me and moved me back a few inches.

Michael, yes it's nice to step into gayland once in awhile.

I am all for gay bears.

Dr Spo, better to meet one of them in the woods!