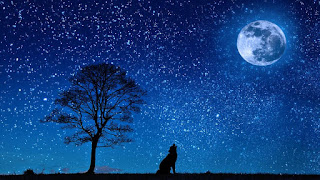 I wish I could record what I have been hearing most evenings this summer. I have tried but the phone doesn't pick it up. Some nights it's just coyotes howling, creepy enough but they are mostly just yappy when they howl and bark a little as well. However some nights there is a sound that even frightens the coyotes into silence. The hair standing up on the back of your neck comes from the wolves, apparently some must have built a den just north of the buildings because as night falls, they start howling after dark. It's not a silly yapping howl, it's the blood chilling deep moaning wail of a creature stalking the woods for its next kill. You get an image in your head of a dark figure, skulking from tree to tree in the evening mist. All the fairy tales filled with night terror become real. The big bad wolf, is the big bad wolf..  but only if you are another animal, they tend to stay away from people but they will kill anything they can get a hold of and when they get really hungry, they will do things that can get really scary, like come into your yard during the day. 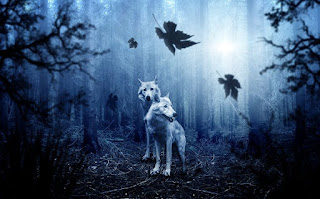 It's the call of nature and when you hear it, let the machine pick up, "sorry, I can't come to the phone right now, plus to be honest I wouldn't taste that good, I'm all bones... and my friend Jim is here.. you know.. the hunter"!

It's interesting to hear them, I know people travel out into parks at night to listen for them. There are a lot more wolves around now than there used to be. My favorite actually is hearing the owls at night, I will miss them when I move. Now how do I set these wolves to shut off at eleven, life in the country.

The neighbors who live across the street from me used to have a wolf. Also a dog that was its best bud. They used him for educational purposes and I loved to see them walk him and his bud on leashes. He had a wonderful howl at night and it always soothed me. He died a couple of years back, and I miss him.

I'd call the bylaw officer if I were you. This is an outrage!

Tuxedo is a bit of a howler, though it doesn't scare me as much as a coyote!

Not to worry. As soon as these wolves start attacking cows we will hunt them to extinction again.

I wish I could hear owls.

As I was walking the dogs yesterday morning, a woman came down Altoona Street witn 3 German Shepherds and they all howled... loudly. Not quite the same, but boy were they loud!

Deedles, oh for Pete's sake, the one sound you find soothing is a wolf howling, you really are beyond help! :D Hahaha!

Anne Marie, you're telling me!

Maddie, he probably howls but trust me, it's not like a wolf.

Old Lurker, he says comfortably from behind his computer. Although I was shocked to recently find out wolves were wiped away from the U.S., they have always been here. They do sometimes go after cattle. The wolves around here are used to killing smaller game like deer and often live in small packs so it's not as often as you might think. Sheep however around here always have to be put in at night, you can never leave them out especially at night.

Dave, dogs often howl when they are frightened, is there something you are not telling us??? Lol. I've heard German Shepherds howl and they can get close to the wolf sound, some huskies can too.