I'm so happy, my nipple clamps arrived and they came with shocking power to give that extra spark! 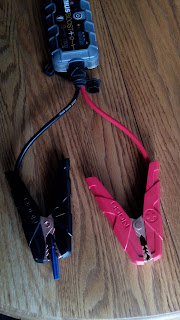 Well you people did say to get more in touch with my sexuality. Plus every nipple clamp purchased during August comes with a free set of fuzzy handcuffs! Grrrrowl. 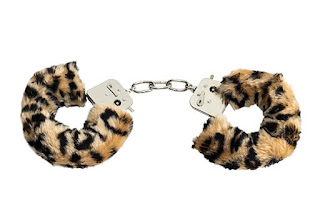 I can't believe it's been a week already since my pride weekend. Time flies when you're trying to get shh.. I mean, stuff done. It's too bad I didn't bump into anyone at the parade. I was prepared to meet people, even straight people from work, many are LGBTQ positive and I could see them bringing their kids out to have fun. I know it would have went like this, "what are you doing here"? Even though I would be wearing a button and carrying a little rainbow flag, I would have said, "these are my people, this is my tribe". Then I would be the Monday morning gossip but that's ok with me.

We have a number of out lesbians at work and I was surprised none were there, neither was the two trans people. Actually at work, no one even knew pride had happened.

A blog buddy said to me last week, while we were emailing back and forth, "what are you going to do to keep the moment going"? I like that he said that because it's exactly what was on my mind. I am trying different groups to socialize with, not dating sites but groups to make friends. I figure make friends first then maybe out of that I will meet Mr Right. Unfortunately this city seems so lame. In other cities these same groups meet, socialize and the groups thrive, here nobody goes, nobody puts any effort into meeting someone new and the groups disband in a year. Anyway I'm going to keep trying, onwards and outwards. Now I have to remember to turn the power down on these nipple clamps, last shock nearly made me wet myself and not in an erotic way!
Posted by Sooo-this-is-me at 6:50 PM

Oooh, this reminds me, it's time for my yearly mammogram! I think I just learned a little too much about Anne Marie!

Yes, Noco makes the best sex toys. And they are versatile! (Oh, behave.) When it gets cold outside you can use them to jump start your car.

It is time for you to wear a button and hoist a little flag at work.

I am glad one of your blogger buddies got through to you. Yes, lots of LGBTQ+ groups in your area form and disband quickly. That is true of groups (LGBTQ+ or not) everywhere. But if you join a group and attend enthusiastically, it will be much more likely to thrive.

Quit buying your sex toys at Canadian Tire, LOL! Glad to hear you'll check out some LGBTQ+ groups! Don't just go once and quit -- give them a chance!

Into nipple clamps but not waters sports? Have you thought about starting your own group for socializing? Perhaps there are others out there who in your same predicament.

Deedles I feel the opposite, this just makes me want to know more! Lol

Old Lurker, it's hilarious to me that you did a google search on this! :p

Debra, but you know that they will come with a lifetime warranty!
"Don't just go once and quit", you know me too well, lol.

Richard, in all of my sexual fantasies, not once do I tell the guy to pee on me!

That is so funny!! Your entry is such a bright spot! Can you hear me laughing?

Dave, you're a bit of a unicorn, a gay man that prefers rock music. Although there are a lot of gay men in rock and metal bands. If you laughed, then my work here is done. :D