You're gonna hate me but...


I'm going to step into it here but hey, this is my blog, my opinion. Today I had a lot of errands to run and so I found myself with many opportunities to practice my favorite hobby... man watching, oh how I loooove doing that. I noticed something however about a lot of gay men and I wish it were different but it is, what it is.

I was getting plants for the yard and gardens. There was a rare opportunity to watch men of both sexualities, gay and straight. I noticed I could pretty much guess who is gay and who is straight by the way the guys carried themselves. Straight guys swagger like a bull in a field, gay men slink like cats... hahaha, I'm in for it now. 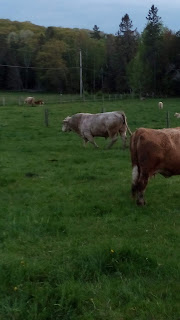 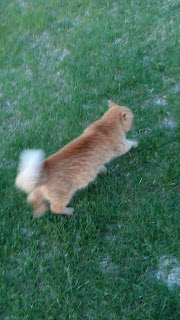 Gay men are like cats, we are cute and cuddly but swagger is something many of us just can't pass off. I know many of you will angrily place hands on hips and stomp a foot in protest. You will say that I'm stereotyping gay men as you do that finger wave thing. However I could tell within seconds who was gay... and if they didn't do the slinky cat walk, they do that little kitty prancing thing, which also sometimes makes them look like they have a stick up their butt. I'm not saying that they are less of a man because of the way they walk, it's just a funny thing I have noticed. There is a saying around here, "cats are bastards" and so as a gay man, I'm just being a cat.

Thanks to 8XY and miss Kitty for the demonstration of a bull and cat. 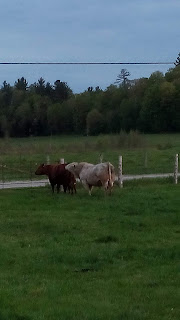 As if on cue, 8XY swaggers down to check out some vjj, oh well boys will be bulls.
Posted by Sooo-this-is-me at 11:24 PM

How very dare you. I am NOT cute and cuddly.

Also: did you get cows? Or are you spying on your neighbor's cows? (You should get some cows.)

Too bad you can't switch gender teams and become a lez like your sister. THEN you'd have all the swagger you want!

let's see...my str8 spouse doesn't swagger, or exude testosterone vibes, or sling bags of soil. he is the cute and cuddly type. and he can be a bull behind the wheel of a car. guess my guy is a mish-mash!

Old Lurker, awww little kitties are so cute when they pretend to be grumpy, let me tickle your tummy!

Lurker, straight men never say "I'm fierce" lol, they don't have to.
No I didn't get cows, they just started showing up at my place! They are my neighbour's cows, he rents my fields.

Debra, that's too funny because when I posted I meant to say, "if you want to see swagger in the LGBTQ community... make friends with a lesbian" hahaha! Again that depends but everyone would say my sister has swagger, she wouldn't like me saying that but then again she would probably swat me so there's that! Lol

Anne Marie, your spouse doesn't swagger because he has you :D you probably have enough swagger for both! There are exceptions but even then, those straight guys carry themselves differently. There are straight guys at my work and honestly they are like the character Jack from Will and Grace, some even realize this and are confident enough with themselves to joke about it.

It is good to know you are on the prowl!

Just remember: first a whisker, then a claw.

I have Cat Swagger.
It's a thing!

PS
And I do carry soil on my shoulder. It's just easier.

I agree with Jimmy. It's all about the prowl. And cats are catty and calculating and maniacal Those straight men would know what to do with me. But I've blown the minds of a few. They can be hot, but often when in closed doors, sadly that strong masculinity somethings go way side.

Jimmy, yes don't worry, first I will just concentrate on petting the kitty.

Bob, lol yes some cats have swagger, actually in her younger days, I used to nickname Kitty, "my lioness".

Is it wrong that you just slightly turned me on by saying you sling heavy things over your shoulder? Lol

Maddie, allow me to stroke you... sorry had to say it. Cats are easier to handle than a bull so make better pets lol.
My FWB had swagger, he was a fix your engine, drink a beer, build you a deck kind of bi guy. Lucky for me he still had all his swagger in the bedroom, lets just say he was a bull and definitely not a cat!

I don't understand why you aren't in trouble? Aren't you supposed to be in trouble?

Here's how you can get into trouble: if you spend all day staring at the Internet. It's time to put the screens away and get some stuff done in the real world! Go say hello to some cows.

Lurker, I guess people kinda agree with me lol.
Yup, closing this down for the day, lots to do again.

So, basically you are saying that gay men are pussies and straight guys are a bunch of dicks! Stereotypically speaking, of course. I'm Baaaaaack!

Deedles, noooo that's not what I am saying. Are you trying to get me in doo doo with the gays! I'm saying straight guys walk around in a confident way that I find sexy. Gay men walk around differently, a little softer but not cowardly, there are plenty of swishy gay men that would have no trouble telling you off for that kitty remark! They of course would say things like "no you didn't just say that" and "girlfriend who you calling p..." and "I'm all man honey" and then they would do that cool finger snap thing and then exit the scene fabulously. Yes... you certainly are back!!! :D

Just joking with you, honey! Your chain is always so much fun to pull! I personally have never understood why being called a pussy is an insult. In both cases, the cat and the love basket *snicker* are wild, beautiful and fierce!

My local Home Depot always has a nice selection of men to admire.....

No, it's not wrong to say that, and so I will add... sometimes I carry heavy things on BOTH shoulders!

I don't know why exactly, but I find it nearly impossible to be turned-on by a straight male in what you might call a real life (as opposed to photographic or movie/TV) setting. Actually I do know why. Because I generally assume, until proven otherwise, that all straight males--and especially swaggering straight males--are homophobic, and I'm not going to be turned on by someone who wants to beat me up! So for that reason I am often more attracted to "swishy" males. Unless it's somewhere that caters exclusivity to a gay crowd, than the swaggerers might get my attention.

fun story...thank you for sharing

Deedles: He is not saying straight men are a bunch of dicks. He is saying they are full of bullshit.

As for you Steven: I thought you were going offline to get stuff done in the real world? *does that finger wave thing*

Deedles, well there is nothing I can say to top that statement so I'm just leaving it! Hahaha!

Richard, you got me in so much trouble, I went to home depot because I misunderstood what you meant by "a nice selection of men" and they escorted me out when I asked about prices! Could happen to anyone.

Bob, well now you just went from a kitty with swagger to a stallion! ;)

Kirk, unfortunately I guess it depends on where you live. I know a lot of straight guys who don't care. I look but I'm not staring or anything like that. Most gay men have a certain amount of swish to them and there's absolutely nothing wrong with that.

Thank you Tanza, welcome to my blog. I was checking out your blog as well.

Lurky, I was just getting a drink of water, I was pretty good today. I accomplished a lot but the wind went down and the black flies just rode in on motorcycles so I made a run for it!
Ugh! I'm not saying that, some are really nice guys, stop it you two, anyway poor men had to evolve like that for us to survive. During cave man days, when the saber-toothed cat came to the mouth of the cave, the early gay man would say, "oh hell no, I'm not going near that thing, somebody tell Grawg to get his ass up here fast"!

Deedles, darn... now I want chips, thanks a lot.

I see this one touched a nerve!

Dr Spo, and sometimes you would almost think I was doing it on purpose!