Because this is a farm.


This past week has been unbelievably beautiful. A solid week of nothing but sunshine and warm weather. Our second mini summer so to speak. It allowed me to get a lot of things done before winter comes. Is today the first day of fall or tomorrow? Doesn't matter, September first is the beginning of fall for me.

I haven't been to any auctions or much of anything regarding country life this year. I haven't really missed the animals, there were a few days I did but not many. Today I went to a small animal auction. My intention was to maybe pick up some rabbits or something. I feel a farm should have some kind of animal other than my old cat.

There were a few things I liked but they went really high in price so I stopped bidding. I mostly went because I love a good auction. Near the end of the sale, a box with three chicks came up and nobody was bidding. I could tell two were males and the other was not so clear, so I bought them. 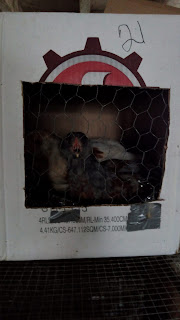 Meet the new cast of characters. A box of chicks for a gay man.. Chick-fil-gay? 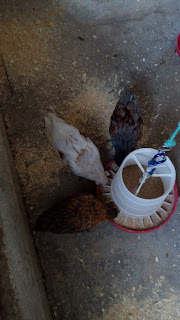 Unfortunately when I took them out of the box, I realized all three chicks were roosters. Anyway that doesn't matter, I just want them to look at, I only paid $1 for each of them. I got them because this is a farm and a farm should have something running around, people look at you funny when you tell them there are no animals here. At least now I can say yes. Once the garden is completely finished, I'm going to let them run around in there during the day. It's fenced so nothing can get to them.

I went in this evening to put some tools away in the barn, it was nice to heard some little noises instead of the deafening silence.
Posted by Sooo-this-is-me at 9:31 PM

It does not surprise me one bit that you bought a box of cocks.

Yes, a farm should have some animals. I feel very sad that you have gotten rid of most of yours. Are you sure you wouldn't like some cows? They are adorable and have floppy ears. How about some alpacas? They are pretty low maintenance, and chicks dig their wool.

Three roosters to wake you up in the morning. You don't need Siri to an alarm for you.

Also: don't you have two cats? I thought you had two cats.

@old lurker - yes, I have knit with alpaca before.

now you will have to start titling your posts "cock-a-tails".

You should name them Chick, Phil and Gay.

Lurker, I just felt the cockerel jokes were too easy.. what are you filling in for Maddie while he's glamping? This is a bad time of year to get animals, winter means the max amount of chores.
I can tell my spell check was created by a millennial because it doesn't recognize the word "cockerel" but at other times inserts words like "kinda" and "meh" and constantly spells apple as "Apple".

Richard, they are too little for crowing, it will be months before that happens. I can't really hear them in the barn unless all the windows are open. Plus dawn triggers them to crow and that is getting later and later each day.

Anne Marie, I think rooster is a more family friendly word. Can you imagine these randy buggers if I said, "here are my cock pics"!

Bob, well it's a bad idea to name farm animals, especially the kind that tastes great in soup! O.O yeah I said that!
I'm waiting to get a sense of their personalities (chicksonalities) and then I will see, I was thinking along the lines of "Maddie", "Lurky" and maybe "Dr Spo" depends on how they act, actually "Bob" would be a great name for a rooster, I had a Bill but never a Bob. ;)

In time, you're going to regret those roosters every bloody dawn.

Debra, friends used to ask me that all the time, I was a show bird breeder for years and had up to 30 roosters at one time. The answer is no, I love the sound of a rooster crowing. It's only bad in summer when the dawn breaks at four in the morning or when a full moon rising tricks a rooster into thinking the sun is coming up. When I was working around them, I didn't really notice it.

Oh no. I'm sorry about your cat. I know you liked your cats a lot. Now I am even more sad.

As for the entendres: you know full well that everybody else on this blog is virtuous and pure as the driven snow and such dirty wordplay would not even occur to them. So somebody has to fill in for Maddie, and it might as well be me.

Knowing Steven he will probably name them Soup, Stew and Leftovers.

How about I name one Deedly Doodle Doo!

I'm really mad at you Lurky, how could you even think I would name my poor little babies Soup, Stew and Leftovers! Maybe Fryer Cluck, Phil-et and Stew but never a second class name like Leftovers!

How fun this sounds to me to have such birds about. I hope they are a pleasure for you.

Steven, I would be honored to share a form of my nickname with your cock :)

Dr Spo, the best part is I don't have to walk them in the morning! Lol

Deedles, well now you stepped in it! Watching them yesterday I am becoming more and more convinced that one is a girl. Most everyone here is going to agree with me, that of all the ladies who stop by my blog, Deedles would be a perfect name for a chicken... stay tuned! Lol

I'm flattered....? Considering my cowa....er reticent nature, the name would suit a chicken. Anne Marie is no chicken, except maybe a fighting one.