Yesterday after visiting with mom, I went to a small fall-fair going on nearby. I like to try and go because it's organized by the agricultural society for our area, so I'm supporting our own. Unfortunately it was a wet showers filled day. There was a break by evening and luckily the showers stopped. 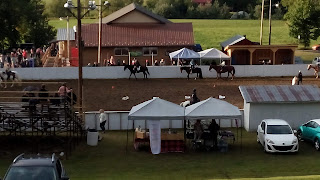 There is a lot of nostalgia for me attending this little fair, as a child I often went with my family, I would know about 90% of the people there and spend the day running around with my friends. My dad even borrowed a team of heavy draft horses from a buddy one year and won a horse pulling competition with them. He was a skilled horse man, you have to know what you are doing, things can go wrong fast, he was 62 at the time. 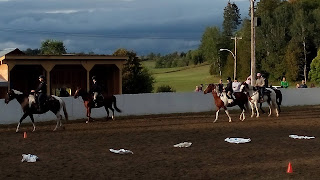 It's getting harder and harder to go each year, too many memories but also it's dying out and that makes me leave feeling sad. As I said before it was 90% people I knew and 10% strangers, now it's the complete reverse. Many of the local farmers no longer participate, there are less farmers around and with much larger farms, they just don't have the time.

This next picture is a game they have the kids play. It's like musical chairs only they ride around the ring, when the music stops, they have to jump off and run to step on a white mat while leading their horse. It can be really funny, I usually cheer for any kid I know or the smallest kid. 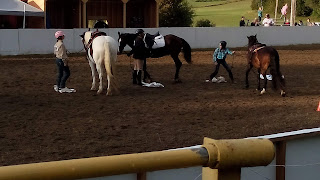 There is a line from the movie George of the Jungle, "what is it with chicks and horses". Now I know that the mantra of the day is that boys and girls are exactly the same, there is absolutely no difference, there is no gender we are all one, we-are-all-one. Until you venture into the real world and things are very different from theory. One of those differences becomes extremely clear in the competitions. All the competitors are girls and women in the riding classes. Girls love horses, back when I was younger, there were as many boys and men in the riding competitions as women, probably even more. However with the invention of inexpensive dirt-bikes, ATVs, buggies etc, along with kids versions of these, the males are more thrilled with motors and were drawn away by them. The females stayed with the animals, that says something about the difference between the sexes. Yes there are exceptions but you can't argue with group after group of ten to twenty riders and all are female. On the flip side, the pulling competitions and wagon competitions are almost all men, usually older men but the wagon groups are small, three to four competitors, the overall volume of women competing to men is ten to one or maybe more. There are sadly not many young men coming up, so the writing is on the wall. This greatly affects my man watching, actually I only saw one cute cowboy. :(

This next picture is of a new competition, the rider tells the horse to stand, then the rider has to crawl through a barrel, get back on the horse and race to the end. The thing is most well trained horses will stand there, however as soon as the rider is in the barrel, many horses will run away because it can no longer see the rider, some become spooked by the barrel moving. Don't worry, the horse will return to the gate where it came in. 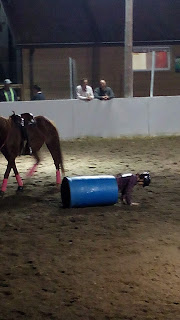 Sometimes I wish it was a little more professional but this is a good fair for people beginning to show or compete. They can learn from their mistakes. At the same time it can make things fun when things don't go exactly as planned.


I found it getting really cold in the evening especially because of the rain earlier so I decided to head home. I blogged a little while back about how I started to enjoy going barefoot outside, of course that has ended now, even my floor was cold enough I was wearing socks last night. I saw something at the fair that made me think how good it is to be young. There was a little guy about eleven or so, the kind of boy who is probably going to be a hottie later on, he was walking around all afternoon and evening barefoot, even when I was getting ready to leave! It was cold, the grass was wet from all the rain and yet he didn't seem to be bothered by it at all, kids are tough.

I drove away thinking this will probably be my last time to go, the reason being that while there, I was enjoying past memories much more than what was actually going on. Time to make new memories elsewhere, I feel it's pointless to waste time regarding the past.
Posted by Sooo-this-is-me at 12:31 PM

I think your new boyfriend will enjoy going to the fairs with you next year, or maybe this year if you act quickly enough.

It's too bad you cannot bring your mom along. Do you think she would enjoy attending?

From the title of this post, I was expecting some cute pictures of horses playing with baby chickens. How disappointing :)
@Jimmy- What did you stop showing horses? Was it legal?

Chicks like horses? who said that? Ursula or Ursula. I could never tell them apart.

Sometimes things we used to like are just not the same when we get older. I like that you want to create new memories elsewhere.

Lurky, no I wouldn't be able to take her, she is too feeble and her reality is not the same as ours.

Jimmy, time to buy a wagon for your horse! A 50 year old man in tight pants interests me greatly!

Deedles, horses playing with baby chicks is a nice way of saying, "what are all those little red stains on the ground"?

Dave, I only remember how hot Brendan Fraser looked in his "butt flap". Some guy said it while all the women were watching George play with horses.

Richard, I totally agree with that statement. I also think it's because the small fairs are dying out, times change, the following generations have their own traditions and have no connection to the past.