We are all very natural, only the ignorant will say that members of the LGBTQ community are unnatural. It is common to find homosexuality and gender non conformance in nature. I get tired when people try to say that homosexuality is something that has been recently made up, at the same time hypocritically pointing it out in a book that is supposed to be thousands of years old.

I was reminded today about a small flock of chickens that was given to me a few years ago. The flock had become the target of a fox and so the owner asked me to take them. She told me about one of the hens, a "Buff Laced Polish" hen who I called Polly. A silly looking breed with a puffy head dress of feathers, like a chicken version of Tina Turner. The owner said that in three years, Polly had never once laid an egg. She raised her from a chick so she knew it wasn't because of age.

These are not my pictures but the chicken on the left is a good match for Polly. 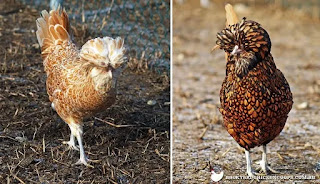 I checked Polly out.. my suspicions were confirmed. Polly was an abomination in the eyes of the church. Most of her features were that of a female, but some were that of a male. Even more interesting was her behavior and her relationship with other chickens. My own hens didn't try to clobber her, a sign to me that they didn't see her as another hen. The rooster didn't pay attention to Polly, he didn't she her as male but wasn't interested in her as a female either. Polly however was absolutely terrified of the roosters, something odd for a hen, this behavior is more like that of a young rooster. Clearly Polly was non binary, not feeling like a hen but also not a rooster either. Polly was pretty much a loner, especially when let outside, she would go off on her own, all of the other chickens, used to laugh and call her names, they never let poor Polly.. play in any poultry games.

Her appearance had a few CKNLGBTQ signs as well, her tail feathers had a slight curve, like a young rooster about to grow in his tail feathers. Polly also had leg spurs, the spikes that grow out of a rooster's legs, only her spikes were hollow and not solid. I kept her for a while, I tried every trick in the book to see if she would lay.. but no egg. Eventually Polly went into show business, no this is not an euphemism, I sold her to a guy that shows birds. I was going to write the title "Polly the transgender chicken" but that would be incorrect, she is not transitioning into a rooster and he is not transitioning into a hen. Polly was staying Polly, neither hen nor rooster, just "Polly" exactly the way nature designed this little chicken.
Posted by Sooo-this-is-me at 6:48 PM

She was more Paulie than Polly, i'm guessing?

there is beauty in every person/chicken. LOVE the tina turner hair on polly.

Bob.. d'oh!!! You stole my joke, I forgot to put Paulie in the post, we think alike, which is a bonus for me but maybe a drawback for you! ;)

Anne Marie, yes beauty in simple things. I was being silly mostly but this post is all true, I think it's an example that the LGBTQ community is just part of nature. It's not like Polly was watching Ellen and suddenly became confused lol!

I don't blame the church for declaring that hairstyle an abomination.

Polly is lucky that some well-intentioned doctor did not try to push her one way or the other at birth. Not all are so lucky.

Lurky, I was thinking about putting her into conversion therapy but what if she came out as a turkey instead? Of course I guess he/she could run for president.

Barns, cats, wolves, horses and now chickens. I beginning to wonder what you smell like?

Jimmy, it depends on what part of me you are sniffing.

Holy Crap that title made me laugh!

I'm sure your smell is a blend and you don't pick up on it. It is like houses that smell like dog pee but the homeowner is immune to the odor and don't notice it.

Jimmy, I only have an outdoor cat, I change my clothes when I come in, we always have, I'm not a hillbilly.