I sold my Dad's old truck yesterday, it's the only truck that he ever owned. Like many farmers he always wanted a truck but also like many farmers he was very practical, so a car would do, since he had tractors with trailers to use instead of a truck. One day he decided to finally buy one, he was so proud of his new toy, well actually not new but almost new.

It's a 1989 Dodge ram and it has been all over the countryside. There are a lot of memories tied to the truck, many of the farm dogs rode in the back, the special ones rode in the front, the most loved one spent her life riding shotgun. Almost anything you can think of was hauled in the back, from animals, lumber, groceries, lawnmowers to furniture. Dad wasn't supposed to be eating sweets but he usually had some hidden under the seat. He was excited because it had a tape player in it besides the radio. He kept a stack of tapes in the glove compartment in case of long road trips, most unfortunately I couldn't stand but it was his truck so I didn't complain.

Dad took excellent care of his truck, in the later years he mostly just used it on the farm, he didn't want to take the chance of breaking down somewhere far from home. We have a second farm actually, it's about a kilometer away so the truck proved handy, the second farm has also been in the family for over a hundred years so we consider it as one farm. I did a lot of driving in the fields with it, I think that is what gave me the confidence to get my license.

The truck never gave him trouble and he drove it until he died. I drove it for years after as well. The body is still in good shape, it stopped running two years ago and it's my fault mostly, I let it get run down beyond the point of return. A young guy I know, stopped in and asked if he could buy it for parts as he has the same truck. I felt this was the easiest way to part with it as I have no use for it anymore and also I have had many people asking for it which has become annoying.

I cleaned out the truck of the few things still in it. The stack of tapes were still in the glove compartment, waiting to be played, there were two pens that still worked unbelievably, some small screw drivers and notes that Dad kept, "#of bales from field 6, parts needed for etc etc, call Mr so and so", the usual reminders. Never would he think while scribbling the notes down, I would be reading them nine years after his death. I kept the truck all these years and I didn't realize why until after I sold it Friday. I felt another part of my memories of Dad and happier times, were being taken away again, I felt loss again but it had nothing to do with the actual truck, just the memories that it represented. Goodbye old truck, you served your purpose well. 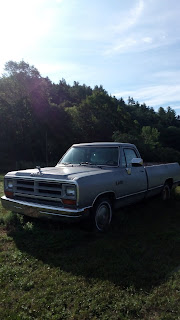 I love this post for so many reasons.people change their vehicle as often as their underwear these days and their stuff and their partners. Your dad, like mine was of a generation that knew the value of something not just the price.

Aaah tapes. I had many, although it was annoying when the machine ate the tape but could be remedied with a pencil and a uneventful of patience. Cds are better though, I think,not so temperamental!

My dog rides in the car with me and she loves it. Our car is always dirty, inside and out due to transporting said dog, grandchildren and produce from our allotment.

It's hard to let go of something to which we're emotionally attached but as you say, it's gone to serve a purpose so that's good.
I would love to live on a farm. Hard work but so worth it.

Sounds like the car held many happy memories. The notes would interest me the most. At one time I had many letters my father sent me over the decades but I've moved so many times that none remain. Only signatures on official documents, like the divorce papers. Happily the good memories have crowded out the bad.

It's hard to give up things we have memories about. I'm sure you have lots of stories about your dad and the truck. This is one of those posts I love to read from you.

I think you did a good thing by letting the truck be used for parts. It's like giving your body up for organ donation. Some part of the truck's body (maybe a toenail, maybe a spleen) will live on in some other old truck.

I think it is also nice that you are able to take photographs now. That's a nice portrait.

Hello! I'm a newbie to your blog. I found you from a comment on Going Gently's blog. I love how we bloggers find each other. You have written so much I need to read back through it all and catch up on your life. I'm glad to have found your blog. I looked for a "follow button" but I didn't see one. I'll have to remember er to visit daily and see when you update. Big hugs to you!!

In the Japanese cleaning ritual of discarding things, there is a small bow or prayer to the removed/discarded object to 'thank it' for the joy and meaning it brought to your life. The meaning/memories remain but the possession is not needed any more.

You still have your memories of the truck and what it represented and that is good. My dad had a similar truck, it was grey, though it was a Ford. I learned to drive a stick shift on that truck.

Through the years, I've discovered that I don't have a sentimental bone in my body (don't go there). I've got warm memories of my father and they are there for me to call upon whenever I need to. Anything passed on to me and my sisters was used or thrown away. I'm such a slob...uh, clutterbug that it's a very good thing I don't get attached. My son, the little s.o.b., came over looked around and asked if I've ever seen the show, Hoarders. Just because I uncovered Amelia Earhart while cleaning my desk, doesn't make me a hoarder! It makes me a procrastinator, damnit!
It's very nice that the truck's parts can be donated and used. Science rejected my grandfather's body. The whole family left the hospital laughing.

It sounds like you had a special relationship with your father which is something I do not have with mine. I'm sure it was difficult to sell the truck.

@1st Man: according to Google, you can add Steven's blog manually by pasting https://sooo-this-is-me.blogspot.com into your Reading List: https://support.google.com/blogger/answer/99761?hl=en .

P.S. please encourage Steven not to sell his farm.

Thank you Old Lurker I will do this. I'm also going to add Steven to my blog roll on my sidebar. That's how I keep up with my favorite ones. I totally forgot about that. And Steven, don't sell your farm! :-)

Objects and possessions don't mean anything...but not the memories connected with them. You'll always have those.

Christina, life on a farm is great when you have a family to share it with, when you are alone, it's isolating.

The notes were a little magical, to think they were written by my father, a link back to him for a brief second. I think any vehicle holds memories, just a farm truck in the family for almost 30 years holds a ton or actually in this case... a half ton. Lol

Walter, thank you. I find I am giving up a lot of memories lately.

Well I didn't realize reading my blog was such a downer for you. It's like when someone writes songs or poetry, they are usually inspired by emotions and the most powerful are often love or sadness.

Dr Spo, I loved this tidbit of information, thank you for sharing this with me. It made me smile.

Michael, sounds like you have truck memories as well, even if it was a.... Ford! Lol ;)
My car is a Ford.

Deedles, everyone is different, to each their own.
This reminds me of my elderly aunt, she was a widow and kept everything, people called her a hoarder as well. Once the whole family went to help her clean up and to everyone's surprise, we found her husband, she wasn't a widow after all! It's totally true!

Richard, sorry to hear about your situation. It was hard at first but the memories are not with the truck.

OL, thanks for being my blog administration.

Maddie, yes that is true plus a truck is an awfully big knick knack!

I think your melancholic weekend entries are some of your most heartfelt and best, actually. But I am sad that you are still planning to sell the farm(s).

OL, I am a little sad but being alone I find things are getting ahead of me. If I was younger and had a partner it would be different.