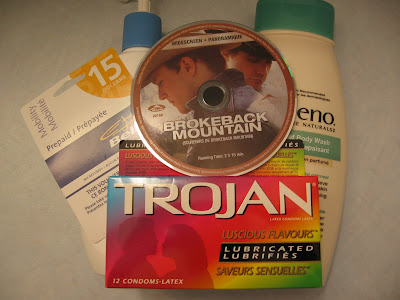 Friday was my gay shopping day, with a huge snow storm coming I knew that I would be stuck inside, so I wanted to get a few things to tie me over since TV really sucks now. Not having watched the movie before, I wanted to watch Broke Back Mountain since Heath's death. I needed to get a few groceries first and thought I could pick the movie up on the way home. I also wanted to be very gay in that I have noticed my soap is drying out my skin so I decided to switch to a gentle Body Wash (ooh la la), I was also looking into getting lotion to keep my skin soft and wrinkle free, next it will be freaking eye liner I guess!

I went to the grocery store also to check out if my hot guy was there, darn no luck he was not working. I bought my snack food for movie night and headed out to get a hair cut and the DVD. The weather by this time had become insane and the car was sliding all over the place, my usual store I rent DVDs from is far from me as it used to be on the way home from work. With the roads turning out really bad, I decided to go to a Block Buster close to where I get my hair cut. After my hair cut I went to a drug store and while looking for skin products I walked by the shelves with condoms. I have been talking to two guys this week and I thought I better have some on hand just in case. There were so many kinds I was totally over whelmed, I did not know which box to choose! I saw this box of four Luscious Flavours and it made me laugh, I thought I just have to have those, even if I never use them I want a box of flavoured condoms. As I approached the counter I could hardly keep a straight face as I suddenly realized I was buying a large bottle of lotion, moisturizer and a box of condoms, yeah not too perverted looking. Next I went to get my movie.

When I went in there the line ups were like at Christmas, guess everyone had the same idea and wanted to get movies before things became even worse out. I did not see Broke Back on the shelves and I also did not want to wait forever in line only to be told they were out, plus I would have the bother of getting a membership card as well. I was a little upset that I would not be able to watch it, there is a place that sells used DVDs in the mall but they did not have it either. On my way home I remembered that the little tuck shop in my building rents DVDs, I figured they would not have it but I could watch something else. When I went in I could not believe my eyes, BINGO! They had it! Here I made a special trip to get it and it was in my building all this time! I also made note that it did not bother me at all to rent it in front of people I know of in my building, six months ago I would have been dying to pick it up and watch it but also would have been too afraid someone might see me rent it. I also rented The Forty Year Old Virgin, no smart ass comments on that one please! I will talk about BBM and what I thought of it in another post later.

The last thing I bought was a calling card, now you may be saying "but Steve, that is not gay," well it is when you are topping up your phone to talk to two guys that you met on line. I don't use my land line until I am sure they are not crazy. The first guy you will be shocked to know I want to hook up with for sex, yup you read that right. He seems nice enough and wants to be friends with benefits later when we get to know one another, I am pretty frustrated so I am ready to give it a go. Now don't everyone panic, I will check him out well before anything happens. The second guy came out of the blue just looking for a friendship, he seems like an awesome person and I am totally trying to get in good with this guy. Guy number one was busy but I spoke with guy number two, I was very surprised with how much easier it was now for me to call up a total stranger. He is a really down to earth guy and was easy to talk to. We ended up talking for well over an hour. It felt good to make that connection. There you have it, Broke Back Mountain, Flavoured Condoms, Body Wash and gay guys on my speed dial, made for a much more interesting Friday than watching Ghost Whisperer. I am kind of sorry that I don't have any bananas to try out one of the flavoured condoms, even at least a pickle. That was my gay Friday now I wonder what I should do tonight.
Posted by Sooo-this-is-me at 11:02 AM

Have a great time and be safe Steven!

Better wait until the end of the weekend to watch the movie, just in case it decks you like it did me. Profoundly affecting, but not suitable for partying.

The next step after body wash is probably moisturizer, and don't laugh. If you live in a harsh winter environment, a good moisturizer is a very good thing to have around for the health of your skin, let alone the preservation of a bright, boyish appearance.

I'm writing this on the tail end of your weekend--I hope it all turned out just as you'd like, Steve!

The next step is that you are going to use the things you bought. ALL OF IT, I mean ;)

I wish I could plan my weekends like that. You're so organized.
Hope it was a good one for you.
Be careful.