This year when I was deciding what to do about the garden and flower beds, the decisions were difficult. Unfortunately with everything being shut down, there were few plants or flowers to be found anywhere. All the markets where I normally buy from, were not able to plant seeds and so were shut down. I had to search far just to find tomato plants. Almost all of the seeds were sold out. There were some things I couldn't get like onions to grow.

I had to make due, I always resow my potatoes and this year I used old onions from last year to regrow new ones.

One thing that was annoying was I couldn't get flowers. Most places were sold out by the time I was allowed to travel. The flowers that were left didn't look so healthy. I was thinking about letting the flower beds return to grass and just mow. I decided to try something, there are still old heritage type petunias growing here, they actually get quite large. I found some growing in clumps and transplanted them to spread them out. Unfortunately they won't start blooming until July but that's almost here and something is better than nothing.

We will see what happens, this picture was taken on June 14 a few days after transplant. They are starting to fill in more now, later I will do an after shot.

My Spiraea came back this year thankfully, last year I trimmed it to the ground to give it new growth, it had been half killed by winter winds. I didn't realize how slowly they grow back so there were no flowers and no bush last year. 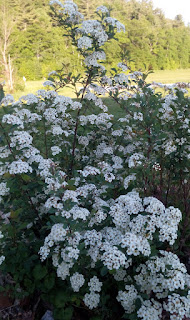 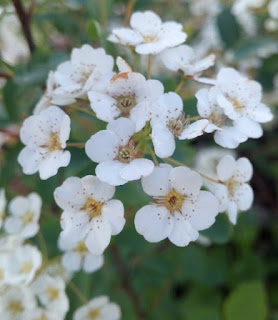 I also did the same to the snow ball bush, I forgot the proper name, I cut it to the ground last year and now it's coming back. 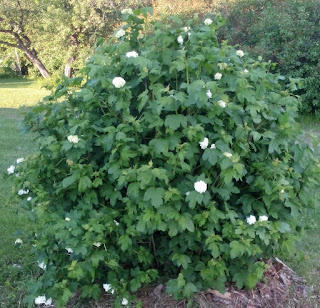 Right now we are going through a crazy heatwave with high humidity, no rain as well, the lawn is crunchy like breakfast cereal without milk.
Posted by Sooo-this-is-me at 5:29 AM

You’re quite innovative, Steven. And quit the horticulturalist, too. Good luck with all the plantings.

I love that you have so many plants. And that you actually know how to take care of them.
I am just taking my first steps with a mini-garden and I'm already overwhelmed. I am anxious because I transplanted some plants and am growing some from seeds. It takes soooo long!
Spiraea sounds so awesome!
You should post more pics later in the summer to see how they're doing...

Love the snow ball bush. We have one in the yard that is just gorgeous.

Your pictures are great. When I plant things, I have no idea what I am doing and just hope for the best. It has been hot and humid here, but that is par for the course this time of year.

Making DO! It’s making do!
And you have done very well with yoour planting.

I have great admiration for anyone who has the patience to make things grow. I personally have a black thumb (it goes with the rest of the body).
There, their, they're, you do you with your spelling. Don't let anyone give you any doo doo about it. It's your blog thingy. Life is too precious to waste picking nits.

How about putting perennials in your flower garden? Then they'll return every year on their own!

That is all so lovely. I love spiraea flowers that grow on the bushes. I would swear you and Maddie need a reality show called The Steven's...it could be a whole lifestyle show. Im good with flowers but not much else.

I work for Home Depot, an Essential retailer, we had no problems getting plants. I know we have stores in Canada, you should check us out.

Deedles, great response! Haha! "Don't let anyone give you doo doo about it."