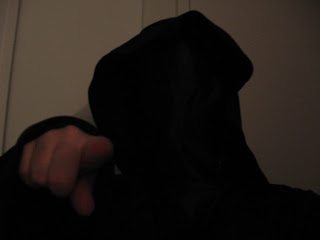 Aaahhhhhhhhhhhh! Run everyone and remember, if you split from the group, you will be next! Muhahaha! Happy Halloween kids! I am starting a little early because I will not be around for a few days and I wanted to have my blog fun now. Death came the other night for my poor tomato plants. Tomorrow night is my sister's annual Halloween dinner, it is fun we have good food, friends and watch the kids come for treats. My sister, like her brother (me) has a bit of a brat streak in her. She likes to make up her front yard with things that jump out at you when you enter her grounds. I mean grounds, as in ghoulish grave yard, she has fun turning her front yard into an old story book haunted grave yard, none of this 'PC' smiling happy face ghosts. The best part is usually the kids are trying to calm down the mothers. 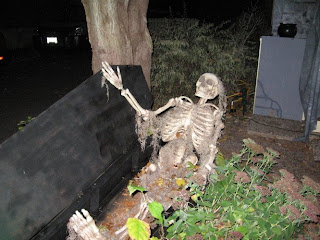 Make no bones about it, we both have the same liking for scary things, even as little kids we have always liked scary movies, stories, books etc, however that is we like scary movies and not gross or gory movies. Does any one remember the Saturday morning oldies, Abbott and Costello or even Laurel and Hardy, being chased by the wolfman, bats or vampires, for kids those were scary and fun days, we never knew whether to laugh or be scared. It often brought in our parents to get a kick out of us watching the same movies they watched when little. Halloween for us was just a fun time to dress up and go visit neighbors, for kids stuck out in the country this was a welcome break from the isolation. It is sad that so many people want to ruin it for kids now, the usual bunch that is always at it, sucking the fun and life out of everything, like vampires only their pay off is monotony and control 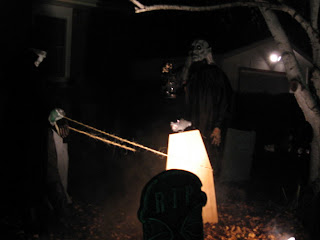 After the dinner and scaring the crap out of little kids, a bunch of us are going to a gay bar for a little drinking and dancing, more bad behaviour, oh yeah! That night it will be back to Dave's for the night. I am a little excited about this because the next day, he has plans for me. It will be my b'day and he has a weekend planned out but will not tell me a single thing. He just gave me a list of different types of clothes I will need for the days and evenings. I am not even sure if we are staying in this city. I do not care if he takes me somewhere exciting or relaxing, I am excited that someone has planned something out for me and I totally appreciate that. Still the not knowing is a bit like being a kid on Christmas morning. Did I just say Christmas, yikes back to Halloween, the other will be here soon enough. 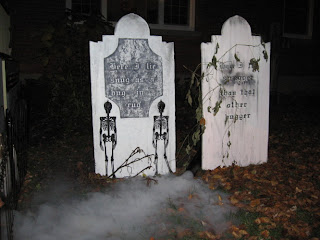 The Haunted House. On my way home to see my parents, I was saddened to see that an old farm house on the way there, had been torn down. There are plans to build homes along that road because it has a river view. I am sure every new home will be nice, in fact so nice that every home around it will be build exactly like it, except for the door or siding colour. I was sad to see the old house go as it to me was standing history. It was even still in use last year. Gone too is the ghost story within. The house was quite old, at least a hundred years or more and through the years the original children grew up and left, leaving behind their parents to age and eventually die. Even before my time, for many years the house sat empty. One night a man returning from a late binge on the town, saw a glowing figure standing in the door, knowing no one lived there anymore, plus being of Irish background and hearing the old people's stories of spirits, banshees and devils there was no way he was going to stop and check it out. At first he said nothing, people would blame the drink he well knew. However as many a night traveller passed the house, she appeared. In the door, the glowing figure, waiting, peering out. People began to talk, many had saw the figure, many felt it must be the old woman who had lived there all her life, lost or confused and so she stays bound to where she knows, her house. It soon became that many of the superstitious people were afraid to pass the house at night. Finally some men had become curious and wanted to investigate, including a family member who came back to see what was going on. They stayed around one night, at first nothing happened but then suddenly a glowing started to appear at the front door, a long slender figure, and staring at the light, they saw it was actually coming from upstairs. To their surprise they discovered that light was coming from a passing car as it came round the corner on the road, the light would shine directly on a long mirror in the hall upstairs and reflect back out, giving the appearance of a glowing light in the house where no light should shine. In the last few years, road work and clearing of brush had exposed the once hidden mirror to certain headlights, it was all in how someone passed by, causing some to see the reflection and others not to. The mirror was moved into a room and the ghost was finally laid to rest. Of course many of the old people did not accept this explanation, eventually a family bought the place, moved in and never reported any strange lights after. Now of course some say tilted floor boards, but they could just never figure out how the old piano that came with the house, no matter how many times they moved it, kept returning to the corner where it was when they moved in. 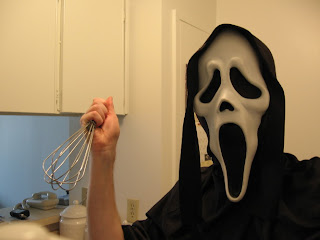 Cool story. I don't buy the alternate explanations. The old woman definitely was haunting the place.

Happy Birthday! The day sounds like it's going to be a lot of fun.

This was fun, Steven! I like the practical explanations, but I'm with Doug - I bet the place was haunted!

Sounds like you have a terrific weekend ahead of you--enjoy every moment, and remember to take notes about some of it--we'll be waiting around for the details!

Happy Birthday (will you finally be legal now?)!!

I LOVE the weapon in your closing photo. It gives new meaning to "beaten to death."

Happy birthday, Steven. Have a great weekend with Dave. And we want a report.

You brijng back many of the memories from a long time ago when we used to trick or treat at night. Now for the last 30+ years it's always been during the daylight hours. I remember being scared to death of some of the things neighbors would do with their contraptions. Now you just don't have that fun any more. Thanks for taking me back. Happy Halloween!

Happy Birthday! Have a great time with Dave and just enjoy it all.

I'm home after a weekend away, playing catch-up, so I can't wait to hear how your birthday got celebrated. Are we going to get to see the list of clothes you had to bring? I'm picturing something like: