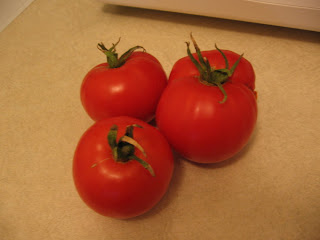 Since there are so many gardeners in blog-land, this buds for you. As fall is here, it has turned quite cold these last few days. Most gardens are long finished, my parents for example are north of this city almost by two hours so they lost their garden to frost in the first week of September. Dave is closer and along a river so his vegetable garden finished out a couple of weeks ago but he still has some flowers. As for my 'back 40' or balcony as normal people say, it is hanging on. The heat from building protects it from frost, actually most years the plants stop flowering from lack of sunlight as the days are shorter. Some of the stronger plants live until November which is unheard of this far north, they die from being frozen not from frost as they will not be touched until the temperature drops well below freezing. I hate to just cut them down if they are fighting to survive so I wait until the weather does them in. 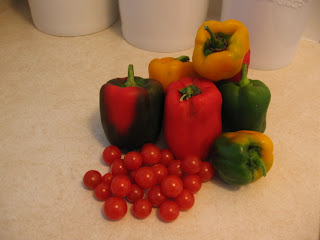 This week I harvested my vast crops, actually I have been eating fresh tomatoes, peppers and onions all summer from the balcony and what better to have a hobby that pays you back with food! I wanted to bring in the veggies in case they get frozen, there are still green tomatoes and small peppers out there, I left them as some days when it is warm and sunny, they try to grow and ripen fast before winter. 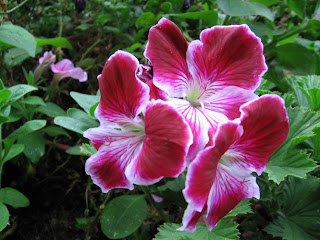 Dave gave me this geranium, it started out as a small cutting but did really well in it's pot and grew into a bush, it is still flowering like crazy, if anyone knows what it is, please tell me. 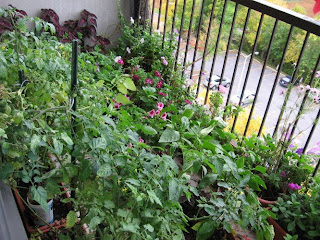 A photo to brag about how green everything still is, in contrast to the time of year, you can see below the trees have turned that yellow colour just before all the leaves fall off. I had just trimmed the plants as they were getting out of control. At night I give them warm water and they reward me with cherry tomatoes, I hate to let them go because of my dislike for winter, I love my green, like Noah I will rescue a few from death and my window sills will become their ark. 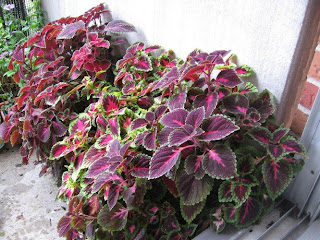 My Grandmother's coleus doing very well, it will be the first to go when things turn cold so I will have to take cuttings now, this way I carry on a living memory of her.

Everyone have a good weekend!
Posted by Sooo-this-is-me at 1:33 PM

Wow! That's an extensive garden for such a limited "back 40". I love the geranium! It's such a pretty variegated flower. Enjoy those tomatoes and peppers!

I love a guy who has a green thumb! Great job Steven!! Keep 'em pictures coming my friend!! I love them!!

You have a wonderful weekend, too! Oh and look before you leap! :-) xoxo

Ah, Steven, you know the secret of good gardening, obviously--its all about the loving...and its clear you love the denizens of your Back 40. It's always a shame when the season turns and we must say so long to the friends we've known in that year's garden.

Some do return of course--I love that take cuttings from your gram's coleus...always loved that plant.

The geranium looks lovely, too, though I'm longing now to see its proper colors on another monitor.

Have a great weekend!!

Steven, you evidently have it, whatever that is, that makes gardens grow. And on a balcony no less. Your garden senses your compassion, and prospers.

A friend of mine once said what's the point of growing something that you can't eat or smell, heh. What fun to have salad and stir-fry all summer and beyond. I eat a peppers, onions, and tomatoes in some form or other every day.

Coleus is said to bring luck.

As much as I love this time of year with its fast approaching cool air and even colder nights, I hate just as much the end of the growing season. I wish I could say I was good at keeping them alive during the winter months, but alas, no green thumb here....

Steven, what a fabulous back 40, I had no idea. Several of my plants are scions from plants belonging to my maternal grandmother; not only do they remind me of her, but they connect me with several other relatives who also have cuttings from her plants. I like to imagine the plants (Boston fern, maidenhair fern, angel-wing begonia and aloe, to name a few) entwined with my family tree. I've also been able to give cuttings to several friends over the years, making the green web that much wider. Too bad we can't transport plants across national borders; I'd love to trade you some of mine for some of that coleus.

Wow I am going to have to try this out....your veggies look so GOOD! and the plants are beautiful.

Great job! Marc is the gardener around here, but I know enough to be impressed!

Looks like you didn't have the opportunity to sit out on the balcony as the fruits of your labor seemed to take over the floor space. Pretty soon you'll be putting the see-through tarp from the balcony up to keep all the snow out of there. ;-)

I do believe you have a green thumb, Steven!