We had been having a beautiful end of November, oddly enough it was much warmer and sunnier than at the beginning of November. In the beginning of the month, some nights were equal to our January or February with temperatures at nearly twenty degrees below the freezing mark. Fortunately the last week warmed up, the sun came out, the snow melted. There was even a smell of spring in the air. Some of my friends were joking about winter being over already. 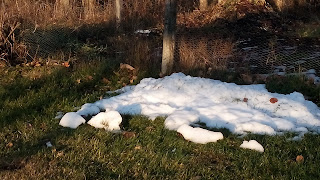 This was all that was left of a snow bank by Tuesday. Everything was roses again... that is until yesterday. Winter roared back in like the son of a b.... that it is. High winds, ice pellets, snow freezing onto everything and this!!! 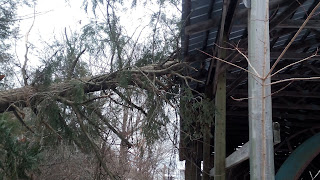 Anyone want a free Christmas tree? It only weighs a couple of tonnes! 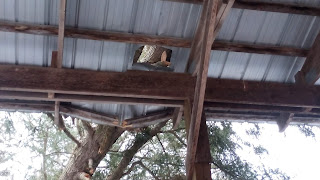 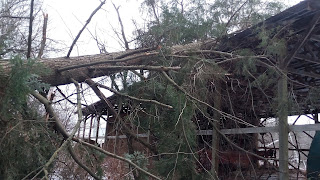 Absolutely fantastic, of all the places to fall. Stupid tree, you do know that firewood is valuable this time of year you giant weed! 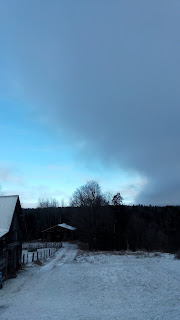 This morning the winter storm started moving out. Good riddance! Goodbye winter storm, while on your way out, careful not to let the door hit you on the a...
Posted by Sooo-this-is-me at 9:50 PM

yikes about the tree !

I got a chuckle when you called it a giant weed because that is exactly what they are. I hate to say it but winter isn't even officially here yet. We have 21 days until it hits. This past snowfall was just foreplay.

Oh no!
That would have scared the hell out of me!
Hope it’s fixable. Fast!

What did the tree fall on? Your house? The barn? I can't tell.

I am not convinced "bugger" is a more polite epithet than "bastard", even though it sounds more British.

If you want some giant weeds you should grow Manitoba Maples. Oy those trees are frustrating.

Ah, I see you've been blessed with free firewood. There's nothing like the smell of a pine log burning in the fireplace... and maybe some hot cocoa... yum.

we are expecting some winter gunk tomorrow and monday.

Looks like time to write your play, "Sap on a Cold Tin Roof", I know, groan! We are getting lovely, cold rain for a few days. Take that, fire season! Leanna's right. What you're having is a pissed off Autumn. Serves you right for using tonnes instead of tons. What is it with you people and superfluous letters? First the extra 'u's and now this! Just picking nits to cheer you up as you contemplate chopping wood.

Free? He has a roof to fix now!

Weather can be a cruel SOB! It toys with us...gives us snow, rain, freezing rain, temperate winters, polar vortex. It’s all a crap shoot. As they say in the Chicago area, if you don’t like the weather, wait five minutes, it’ll change.

Sorry about the roof. Hope there isn’t more damage done when you try to remove the tree.

I had no idea you had so many out buildings. Do you use the land? As far as tree fall, I'm sure it is not the first time. Most of your fellow Canadians are here enjoying the beautiful weather.

Deedles, worry not about Steven. I bet he knows how to handle wood just fine.