Canada goes to war with Trump!

After a year in office, Donald Trump finally realized that he had been holding his trade war map upside down. It wasn't Mexico that he was mad at, after all this time he discovered it's Canada. Yes blame Canada, with their health care and maple syrup, they are the cause of all things bad in the US. This morning after his daily gluing of a raccoon to his head, he declared war on Canada!

Immediately we went into action, we asked Celine Dion and Justin Beiber to begin releasing horrible ear worms that will be played over and over in malls everywhere. We shut off the maple syrup pipe lines. We are recalling all of our hockey players, good luck with your boring NHL after that happens. All Canadian comics are also recalled, now for comedy you can tell knock knock jokes.

Finally I am preparing for war, I have pulled out old Mabel, she was last used in the war of 1812 and she stopped you darn Americans before and she will do it again. This time instead of cannon balls, we are using giant spit balls made out of leaflets telling Americans to stop watching Fox News! 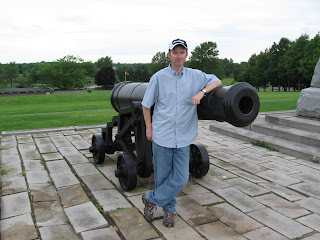 How dare you, sirrah! That is not a raccoon on His Royal Orangeness' head! That, you philistine, is a very, very old and sick prairie dog! If you can't tell one from the other, then you have absolutely no business pulling out old Mabel (that's what you're calling it theses days, huh?) and spitting on anyone! Sheesh!

Deedles, it's late on a Friday night and I want what ever you are having! Well at least it's not a skunk on his head, although he is a stinker!

It looks like I went to bed too early last night, youse guys were having entirely too much fun! I'd join in if it weren't so depressing.

It wasn't late here (for most people), just 8:30. I had my eye injection yesterday and was exhausted from the stress. After a year and a half of those things you'd think I'd be used to it. I was just a little giddy. The shot left a floater this time. I was amusing myself with it. It looked like two slices of black olives connected. Then it was an invisible minion's glasses. Then it turned, and was an eight. Cheap thrills on pain pills, doo dah, doo dah.

Deedles, giddy? macular degeneration? That's in my family history but so far I've dodged that bullet. I've been grounded all week with rotator cuff problems, tendonitis. Until yesterday I couldn't dress myself, lift a coffee cup, or sleep lying down. Finally slept a full night in my own bed last night, thanks to megadoses of ibuprofen. Getting old sucks!

Hey, Mike! So you were a member of the T-Rex club for awhile there, huh? I feel ya (in a purely platonic way of course). Getting old sucks big hairy donkey balls. Are they hairy on a donkey? I never noticed. Anyhoo, old age doesn't creep up on a person. You're going along your merry way and zap, you're watching snails and turtles whizzing by you as you try to navigate a Walmart parking lot!
As for my eyes, I don't think it's macular degeneration. I don't quite recall what was said after the you need shots in your eyeballs (paraphrasing here). I have annyrisms and hemrages ( phonetic spelling) due to uncontrolled type 2 diabetes. Something about going blind if I didn't do the treatments. So my choices? Going blind or dealing with what feels like acid soaked glass shards in my eyes every month until something clears up. Just when I was about to say I'm sick of this, bring on the dark, my right eye cleared up! Huzzah! My left one is being temperamental. Sometimes it just closes on its own and I look like I'm winking at people. Oh well. Bet you're sorry you asked, huh?
We won't go into my frozen shoulder, R.A., deep tear near my rotator cuff, three different meds that may cause cancer, or the nightly insulin shots in my tummy (Okay, TUMMY!). Bring on the big porch, rocking chairs and shawls!

Be careful who you wink at! And hang in there, your bright attitude and sense of humor will carry you through. My twin sister, who lives across the bay from you, is in worse shape than I. She's coming here for a week in July -- I think I'll schedule a wheelchair race for us!

Ooooh, wheelchair race! Will there be an entrance fee? Old school manual or hot rod electric? I have both but the manual needs a push person, my hands can't handle it. Watch out for curbs. You can miss the rampy thing in the sidewalk and get stuck at an angle (don't ask).

Steven, oh Steeeeven! Sorry for the different agenda, but you shouldn't have threatened to use weapons of mass destruction going against the Geneva Convention! Celine Dion and *GASP* Justin Beaver, indeed! Forget all that i before e crap. It's easier to spell beaver.

Mike and Deedles, you guys are making me laugh, not at your aches and pains, no you have my sympathy there but you sound like when I visit my mom's senior home, everyone is always comparing operations, pills and diseases! Something for me to.... look forward to??? ;)

I thought I could avoid all that too. My daily 5k run through the neighborhood is enlightening -- you could get a decent medical degree just by walking your dog! The old men are the worst, they relish revealing every detail no,matter how personal. I could tell you the prostate status of every old man in the neighborhood.

Our president is an international embarrassment. What can you expect from a bully who cheated on all of his wives, is a serial misogynist and has the vocabulary of a 6th grader.

RJ, you are maligning 6th graders, bud. I had a better vocabulary in 1st grade!
@Mike but the sharing of it makes one feel so not alone *cough* :)
Steven, honey, it happens to everybody if they live long enough. My father and mother died at 51 and 54 respectively and here I am at 62 wondering how I got this far. Of course they were substance abusers and I'm not, although my beloved fudge muffin tells me that sugar is a substance and I'm abusing it. Just give me a shot and put me in a corner with a cupcake.

My My... I didn't realize you Canadians were packing such heat! How very macho man. It won't work though. Trump pays Russian prostitutes to spray him with bodily fluids, so spitballs might just turn him on. And don't make him mad either or Canada might end up having to pay for a wall. Really you should build your own wall and make us pay for it. Who would blame you?

Mike, we strongly recommend that you NOT tell us about your neighborhood prostate problems! O.O

My name is Steven and I abuse sugar like my friend Deedles does. Especially when it tries to hide from me in the form of a cookie! Mmmmmm... cookies.

TGA, so you like my big gun? We may have to build a wall, at some border crossings we are getting 300 people a day fleeing your country, we are running out of facilities to house everyone. I think the statue of liberty should be dismantled and sent back to France. In its place you guys could put up a Trump statue with a plaque saying Not Welcomed Here Anymore.

RJ, ewwww seriously, you want to have sex with Trump? O.O

He's going to hate me for that lol!

Ditto the Fuck Trump comment! The man is an international embarrassment. I like your big gun! Maybe Canada should indeed build a wall to keep all of us Americans out that are fleeing this sinking ship.

I hope you guys win.

Michael O.O
Do you kiss your mom with that mouth! Hahaha! Don't flee the beautiful ship, throw the rotten captain overboard!

Dr Spo, I hope we all win like we always did before, one family.

Must have even numbers, I'm so weird.