Ok you guys are asking for it, if you want a cuteness war then bring it on! Spring is hanging on here, we got frost last night, unbelievable for this time of year. Fortunately it wasn't strong enough to do damage to the plants. The three tomatoes are in their forever home now, there is no going back, it either do or die.

Til the cows come home, my neighbor brought his cows here, he rents the land. I like to see them, they keep the place neat and tidy, they look a lot like the ones we had so they feel a little like I have ours back. Our cows have been gone nine years, most are probably dead now, many of them were very old when they were sold, the fantasy of me buying them back is no longer possible.

Still there is a cast of characters here to keep me busy outside. One of my little hens hatched out eleven chicks, I think that's the largest number I let one hen have. 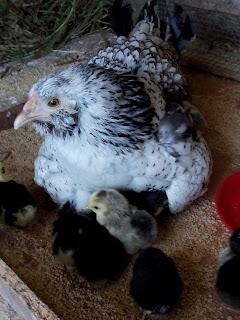 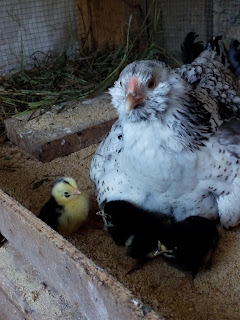 She is a good little mother, it's her first hatch.

Then there are the bunnies, first is Grey Poupon, she was named by a child, I tried to rename her Blue Bell but everyone asks how Grey Poupon is doing so.... anyway she is a mom. 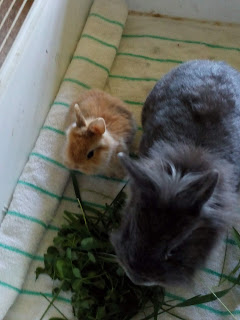 My other female is Blackie, these are pet rabbits they are very small. I don't usually breed them anymore but young females should be bred or fixed. 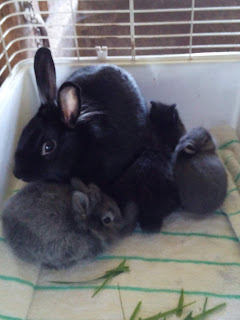 Finally what every gay man wants from me, my cock pic. 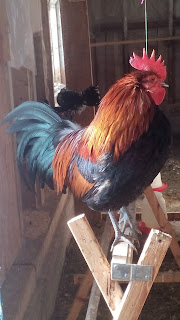 Yes that is a picture of my cock or rooster as the straight men say.
King Rusty..... King because he walks around noble looking and Rusty because he's little and cute.

Are you kidding, I'm always asking for it.

You know how to win me over.....a cuteness over load. I loved this post! Animals are the way to my heart. Nice to see the cock finally. I had a feeling it was a beauty.

I prefer photos of you; you are far cuter than any little bunny.

Maddie, yes a little cuteness to cap the weekend. Surprisingly for a little white guy, I also have a BBC! People with dirty minds will get that. I will put him up another day. The deer are starting to have their babies in the hay fields now, spring has sprung!

Dr Spo, I bet you say that to all the bloggers! ;)

Love your cock! It's such a nice cock, I wouldn't mind playing and getting pecked by it. And I would have to agree with Urs-trully...as nice as your cock is, I would much rather pictures of you. ;-P

Is it true that rabbits will fall over on their side when they are comfortable in their environment?

Awwwww, bunnies! Grey poupon is aptly named. All the spring babies are so adorable. You will notice, I am staying far away from your cock. Your and Maddie's Wild Kingdom moments cheered me up today. Thanks.

Once Steven and I are married, we are going to be the host of a new Aniaml Planet show called Nature....with the Gay Boys.

Maddie, I didn't know that being married was a requirement for that type of thing!

It looks like Rusty has red carpeting as well as red drapes! Love the chick pics, nothing says springtime like chicks.

Grey Poupon is the PERFECT name for that rabbit! I have had many pet rabbits in the past, so I would be tempted to vary the spelling slightly to Grey Poopon.

Walter, look at you finally showing up all hot and bothered, where have you been! Lol, just kidding, I know you are studying.

RJ, yes if they have a drinking problem maybe? Lol, I never heard of that, they will lie down and relax on their side and sometimes the male lies on his side if the female is afraid of him.

Deedles if I cheered you up then my work is done here! :)
Maddie, I love the title of our new show and it will be awesome to have you, I will do stories on kittens, lambs and baby zebras, while you do the spider, snake and alligator stories!

Deedles, you mean being an animal. Yes didn't you get the memo?

Mike, looks like spring has flustered another gay guy! Lol

Debra, lol you are really on today, you definitely know rabbits!