How does your garden grow? Not!


This has been an unusual spring here on the farm, the end of March was nice for the month of March. April was awesome until about the third week in, then it turned cold, windy and rainy. Even the beginning of May was cold with some snow. The weather has finally changed and this week is warm and sunny.

Last night I was able to sleep with my upstairs windows open, aaaah fresh air, so nice plus the gentle sound of frogs in the distance. Spring has finally sprung. People have been asking me if I am going to be sowing a garden this year. I planned to because even if I'm able to sell the farm, it's no big deal to leave it. I would feel bad if I didn't have a garden and couldn't sell. Now however it almost seems urgent to sow one, I keep hearing about food shortages and climbing grocery bills. Plus having to go to the store less often is a huge bonus, maybe even life saving to be honest. 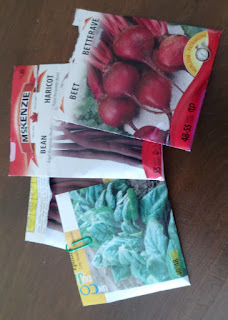 Today I'm going to try planting a few things, unfortunately there is a shortage of seeds, many people heard seeds were selling out and panic bought seeds, even though they have no idea about gardening. Seeds around here are like toilet paper, somewhere there is a frumpy woman named Karen with a closet full of seeds that she is hoarding. Thanks a lot Karen!

My house spinach is coming along nicely, I'm going to try planting some outside to see what happens. Others I'm going to keep growing in the house to eat. I prefer spinach to lettuce.

Below is the spinach five days after I sowed it, that's interesting to me because outside it takes about two weeks before it appears. 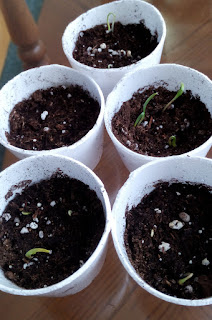 Now nine days later and they are coming along nicely, however the plants are getting too big for their pots so I have to do something with them today.

I also have potatoes to sow, I always have potatoes left over from the previous year and I find they do better than anything I buy. I need carrots and onions, I'm going to really miss those if I can't get any.  Also tomato plants and maybe green peppers.

Unfortunately with the warm weather comes the hoards of blackflies. For those who don't know what that is, they are tiny flies about the size of an apple seed, they bite you for your blood and they form a black cloud around your head and attack. Not as annoying as mosquitoes but the numbers can be overwhelming. Fortunately they will only be around for three weeks or so and then usually die off. The trouble is they come when our outside work begins. Yesterday I inhaled one, that's almost a given, every year I inhale two or three, lucky for us they don't taste that bad.
Posted by Sooo-this-is-me at 1:06 PM

Week before last, I just made stuffed peppers. Man were they good.

Why can't you keep the farm? Where do you plan to move anyhow? The farm in these times may prove more protective then anything else in these times.

I want news on the love life

Black flies sound like one of the plagues! Whoa.
And I laughed out loud thinking about Karen hoarding seeds without any idea of what to do with them because you just KNOW it’s true.
I think the one thing about this pandemic that has been good is that so many people are turning to gardening. I planted some bulbs and I think some of the plants are coming up. If they live, I’ll have a bee and butterfly mini garden. My first ever.

Veggies are great to grow. I have cucumbers and tomatoes, and then some herbs. Real spearmint. I don't do potatoes, digging them up is too much work.

Have you thought about subdividing? Mo money, mo money....

You made me laugh out loud about 'Karen' hoarding seeds. lololol

This is the first year that I won’t do a garden. I’m getting too old and have a hell of a time with invasive weeds. I’m going to miss it but I may do a couple tomato plants just to keep my thumb a little green.

Are you growing chickens this year? You would have a ready market for under-the-table eggs with your ex-co-workers, and you are good at growing chickens. Also farm chores are good for getting your mind off of this awful virus and its awful implications.

If you think you will be off work for a while you could also get some cows. Haven't you wanted some cows?

I agree with Maddie. Wouldn't it be more in interest to keep the farm in these times, so you could always have at least fresh produce, eggs, and be clear of people and virus? And Jimmy raises a good point. Could you subdivide and sell some land? I have no idea how these things work.

I never had much success growing vegetables but herbs seemed to thrive in my yard.

Maddie, yes easier to self isolate but there are a lot of complications remaining here.

John, this is not TMZ lol. Yes I will include some relationship posts. It's odd once I get into a relationship it feels wrong to post about it.

I grow a mean weed (not the good kind) and that's about it. They actually grow themselves without any help from me whatsoever. I depend on the "kindness" of neighbors to supply me with all of my tomato and zucchini needs. I don't "need" the tomatoes and especially the zucchini, but my loving neighbors have the need to get rid of all of theirs! I enjoy imagining you on your farm. I know it may be a little lonely, but I like to think of it as peaceful. No nutcase neighbors exercising their freedumbs (like supplying a never growing need for zucchini!).
I'm entertaining myself (TMI ALERT!) by overeating sugar free candy and blowing up the house with loud methane explosions! Beats sitting in a corner blowing spit bubbles!

Debra, I would have said that at one time as well. However we have some new invader that is tiny, silent and attacks especially the back of the neck. Even worse they stick around until October, never saw that before.

Sixpence, yes a lot of people are trying to grow a garden. Yes I have been wanting to sell and was planning on doing it this spring.. however.. you know.

Dave, you're not digging a grave, just pull up the dying stalks and most come to the surface. I stopped growing cucumber, takes a lot of room and I don't like them anymore.

Jimmy, subdividing is not allowed here, a lot of red tape where the farm is. One of the reasons to leave.

HuntleyBiGuy, yes lovely weeds but I have something called a blade hoe and it's very help full.

Lurker, no chickens feed is about to be very expensive and I'm just not up to it.

Cali Boi, I trying to figure out the best choice for me every day and I am totally confused with the choices. I think if I hadn't met my boyfriend, I probably would just wait things out.

Richard, fresh herbs are essential, there is nothing like them.

Deedles, don't ever feel bad for having the "thumb of death" regarding plants, farmers have a special name for you, "customer" and so they love people like you!!!

Are you putting barriers in front of yourself again? Chicken feed is not expensive YET, and you know it is not good for you to mope. Even if you don't want to go into business then having some birds around means you won't go hungry even if food prices spike.

Did you find seeds yet?

Easier for me to buy chicken now and freeze it.

I can't believe this, Few months back doctor told me that I have herpes , I lost all hope in life on one faithful day Murch 15th I came across a woman say about Dr Ehichioya I messaged the woman and she told me that at Dr Ehichioya is a very good doctor and Dr Ehichioya helped her to get rid of her herpes illness permanent I ask her for Dr Ehichioya contact she sent it to me and I decided to email him and he told me that all is going to be well with me and I decided to purchased his herbal medicine and used Ups courier service to ship the herbal medicine to me and he also told me how I will used the herbal medicine and I did as he told me behold I am now negative as you awe reading this testimony and pleas whatsApp him on +234815 271 9187 or email addressgmail https://m.facebook.com/Dr-Ehichioya-Cure-home-115093413368342/?ref=opera_speed_dialDr -Ehichioya Cure -homeAm Dr Ehichioya I cure different types of deicess my harb medicine will cure you completely

TOTALLY FREE FROM HEPATITIS B. FOR OVER 5 YEARS LIVING WITH IT I’m Beyonce from Canada, i was diagnosed with Hepatitis B 3 years ago, i lived in pain with the knowledge that i wasn’t going to ever be well okay, i contacted so many herbal doctors about herbs to cure me and ended up spending some amount of money but i never got better i was determined to get my lifestyle back and to be able to do things am restricted from doing so one day i saw a lady’s post on how Herbalist Dr. James cured her from the virus with his herbal medicine i contacted him through his email drjamesherbalmix@gmail.com we spoke, i told him all that i was going through and he told me not to worry that everything will be more better again so he prepared a herbal medicine and send it to me through DHL courier company and told me the dosage,after 13 days of completing the herbal medicine,i was totally different,so I went to see a doctor for a blood test ,After taking a sample of my blood for the test the result came out negative,i just can’t deny that i’m the most happiest woman on earth this very moment ,i’m so happy and thanks to Herbalist Doctor James If you are suffering from any kind of diseases such as HERPES,HIV/AIDS,ALL KINDS OF CANCER,COPD,PCOS,DIABETE,AND MORE contact him on
Email..... Drjamesherbalmix@gmail.com
Website.....Https//Drjamesherbalmix.WordPress.com
What's APP..+2348152855846