My Neighbours are SUCH Turkeys!


My neighbours stopped by for something to eat, they are a bunch of turkeys... literally! One of the perks of living in the country, or at least this time of year, later on when people are trying to grow gardens or crops they become a pest, a very large pest. This time of year however it's nice to see some signs of life. The snow has been so deep this winter that most wildlife moved out of my area, some animals are returning but it's still quite deep with snow in most places, this morning the birds were here picking around the buildings trying to get food. Below you see my fields, usually at this time of year the fields would be 80% clear of snow, very far from that as you can see. 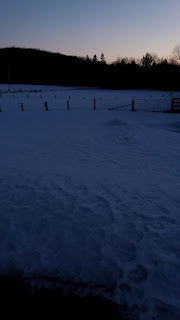 Not many places for wild animals to pick up food, a lot of animals are trying to get food along the roadsides, unfortunately I see many deer etc, have been hit by cars. I'm going to buy some grain to help until the snow starts to melt. I figure if they made it this far, a helping hand doesn't hurt. Plus humans have already made a negative impact. 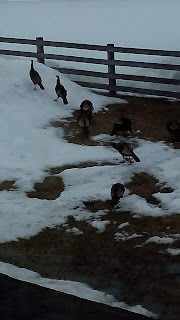 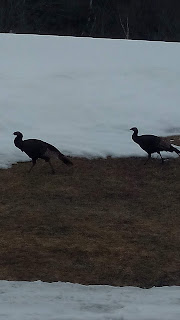 I was taking pictures from upstairs so as not to spook them. Some came right to my deck. Actually turkeys are not native to this area, however because of farming, parks etc, it creates an environment that lets them thrive. 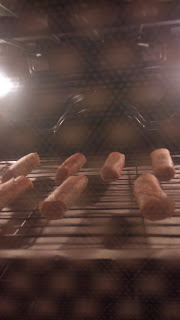 Finally, I would just like to add that the other night I was enjoying fresh made springrolls, I just needed to heat them up in the oven and savor their crispy goodness, it's what happens when you have Asian friends that worry about you. :)
Posted by Sooo-this-is-me at 11:15 AM

As lovely as they are, these pix are too depressing for this time of year! We have a herd of turkeys that like to frequent our yard. I noticed that the tom was missing on their last visit. Balder Half was walking the dogs and told me that the tom was dead in the street. Sad. He was so protective of his harem. Mean little sucker. He was always attacking people in their cars. I think that one of his hens put a hit out on him. He attacked the wrong car. The car fought back! He fought the car and the car won. Doo dah doo dah. Some meds should not be taken on an empty stomach.

Deedles, what about the yummy spring rolls, not depressing at all!

I love spring rolls! They are depressing in that they are in your oven and not on my plate, dagnabit! A lot of my friends come from those Mexican "countries", so I get homemade tamales and tortillas. Major yummos! Enjoy your weekend, Steve.

It is upsetting when spring rolls are the only sign of spring. But chin up -- there are only three or four more months of winter remaining.

Old Lurker, oh wow! I see you've been to Canada then! Lol

Oh my days! I couldn't bear all that snow......
I have just planted 8 rows of potatoes and a couple of rows of beetroot. I hate winter and love to be outside as much as possible. I live for my garden.
The spring rolls look ace. There's some nice people out there!

I miss my turkeys
The best pets I ever had

we have turkey vultures...

Yep...when we marry, your moving here for my spring rolls....I love winter but no way putting up with that kind of snow cutie pie.

@Deedles...dagnabit? Have you been hanging around Elmer Fudd?

@Maddie- No, not Elmer. I found The Rodeo Song on the you tubes yesterday. Now I'm trying to wash all of those F bombs out of my head! Hilarious song.

Mmm, spring rolls. Mmm, turkey too, for that matter.

@Debra: I am sure Steven is not above inviting his neighbors in for dinner.

Christina, I like gardening as well, I love how you see the results of your work progress right in front of your eyes. Plus you get to eat the results. The only thing I can grow now is snow balls and ice cubes lol.

John, don't let the dogs see you type that! Lol :)

Anne Marie, we have them now as well, large flocks of them started returning last week. We didn't have them when I was a kid. They are actually a really useful bird, they clean up stinky road kill in minutes.

Maddie, I agree absolutely, take me away from here!!!

Maddie, lol you wittle wascal you!

Deedles, you mean "it's forty below and I don't give a" ummm wait it's Sunday, better stop right there. ;)

Debra, or turkey spring rolls! Actually that probably wouldn't be good. Those spring rolls were vegetarian, so yummy and also light tasting at the same time.

OL, at this time of year it would be like chewing on a leather shoe, plus it would be about as tasty as a leather shoe as well. I prefer the store bought turkey with all its hormones and chemicals that make its yummy goodness.

Spring rolls, yummmmm. You live in a remarkable area. I didn't know you had such a big yard and with wildlife. I would kill for a place like that. You are lucky to have such open spaces even if you don't know that.

Leanna, lol... yes I have a BIG yard, it's about three hundred acres give or take, hahaha! I do appreciate it, I tell people it's like having my own private park but there are also drawbacks to living so far from everything.

Who doesn't love a spring roll?

Our wildlife includes Burmese Pythons, Iguanas, and Alligators. Some people eat all three. I guess you could wrap them in a spring roll.

Jimmy, I will just stick with turkeys and deer!