Spring renewal, by the end of last week, winter looked like it still had a firm grip on the seasons here. There was still lots of snow and I couldn't even imagine what a spring day would look like. 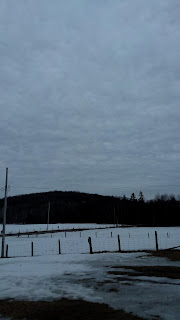 Even as recent as last Thursday, the fields were covered in snow, some places it was above the knee. As far as spring went, it seemed hopeless, I started to suspect we could have snow in some places until May, I don't remember it sticking around this long.

However it's been an Easter miracle, by Sunday evening, the warm weather and rains had washed away most of the snow. 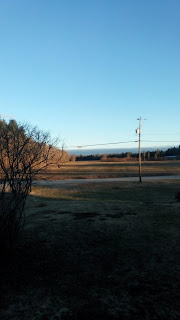 The fields are clear, there is some snow in the bush but it will go soon. Spring has arrived, there are all sorts of birds around that are singing. Including the gravy bird, it's a little bird that I don't know the actual name of... but it caused laughter when I named it that as a child. My family agreed with me at the time, if you listen to its call, it sounds like the bird is saying, "gravy, gravee, gravy". It was 20° Celsius outside in the city this evening. I had to drive home with the windows partly down, I no longer have to wear boots and I stopped wearing long underwear last week. Winter has ended... whew!!!
Posted by Sooo-this-is-me at 10:45 PM

OMG same!
Just a week ago it was snow and wind and chill. Yesterday it was basically warm and so will today. My throat is beginning to feel scratchy. Pollen will be in the air in no time. I saw a dandelion. Winter is officially over.
No more long underwear! yay!

Sixpence, I love dandelions! Pollen doesn't bother me until June when certain trees start to release clouds of the stuff. No snow but I saw bug spray go on sale Saturday so.... lol.

You stopped wearing long underwear? Is there a photo to prove this? I'm with Anne Marie on this one. Go commando. Your boys will thank you for it. As will the rest of us.

Do you have your garden planned?

This post has me humming "Spring, Spring, Spring" from Seven Brides for Seven Brothers. We are going to be in the eighties this week. It's like summer is trying to push spring out of the bed early!

I didn't wear a coat outside yesterday!!!!

I only wear long pants when I'm called for jury duty. Last call was six years ago.

Soon you will be complaining about the heat and the mosquitoes.

I think Debra's achievement is more impressive than yours.

Lurkster, I'm sending you a big sloppy kiss (for your cheek) and a massive hug, because you sound like you can use one!

@steven - in this area, "snowballs" is a round chocolate cake with a cream filling; it is covered in marshmallow and coconut.

here is a picture: https://en.wikipedia.org/wiki/Sno_Balls

balls you can eat! (wink wink)

Deedles: is it that obvious? I still feel waltzing outdoors without a coat is much braver than jettisoning one's long underwear.