Everybody sing along with me, "it's beginning to look a lot like Christmas, eeeven though it's Hall-o-ween"! Ok once more with feeling... lol. 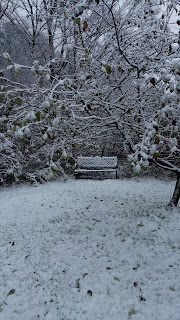 This is my garden bench, I call this photo, "my garden bench". Is there no limit to my artistic creativity! I still have onions growing in the snow. 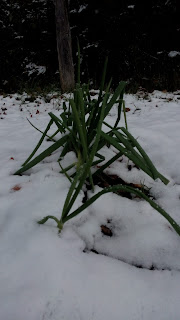 This evening I was invited to a neighbour's house for tea, chatting and pumpkin pie. I heard something funny last week, a young guy said that as a concept pumpkin pie sounds great but as a reality, it's not so great. I laughed because even though I enjoy a piece of pumpkin pie now that I am older, as a younger person, there would be no way you could have convinced me to eat it. Younger Steven would have classed pumpkin pie in the same category as mashed turnip, baked squash or boiled spinach, the unspoken about, food group officially known by children as ugh... blah!

Now however I enjoy the odd slice of pumpkin pie, even better is sitting in a warm kitchen with friends talking and laughing about the local antics of certain neighbours. These neighbours are good people but seem to act as if they are characters in a sitcom.

More snow coming tomorrow, I hope this is just a freak of nature and we will return to our gloomy grey rainy days like a normal fall. I'm not ready to deal with snow so soon.

Keep that S N O W to yourself and far away from me, thanks.

Pumpkin pie is a delight to all ages. Why do you think "pumpkin spice" is so popular at this time of year?

Yes, Im with Old Lurker. You mean to say your not using Pumpkin Spice lube?

I like pumpkin pie and pumpkin roll around this time of year. then I'mma over it.

Pumpkin spice is kinda disgusting. I can't with the smell. And Pumpkin pie is still kind of ugh-blah! to me...

My area is getting snow tomorrow. I make a pumpkin pie with persimmon pulp mixed in. It gives the pie a better flavor.

Pumpkin pie is great, especially if made from pumpkin and not out of a can. To paraphrase Keillor, all pumpkin pies out of a can taste alike. Regardless of the main ingredient, pumpkin pie is the best whipped-cream delibery system ever devised by man. And I mean real whipped cream, not that artificial stuff that comes in a cheese-whiz spray can.

I'm not too choosy when it comes to pie, or cake, or cookies, or candy. Being diabetic, it all will probably kill me some day. I, however, cannot stand pumpkin pie! I much prefer sweet potato (I make a mean one). Maybe it's the ginger in the pumpkin pie. I don't use ginger in sweet potato.
By the way, your onions look like a giant, mutant insect coming thru the snow to eat a victim. Don't mind me, depression is kind of weird :)

I love pumpkin pie...but my absolute favorite is pecan.