While driving to work Thursday morning, I was listening to a radio host talking about a list of scary movies to watch for Halloween. I didn't like any of the movies that were mentioned, some I found annoying to watch like the Blair Witch Project and others were just gross to watch. I like to be scared by a movie, not grossed out by it. I was thinking about picking out a scary movie to mention, that doesn't follow the usual Halloween theme. One movie that is scary to watch but doesn't have a Halloween theme to it, (I have in my library) is "The Edge", it was released back in 97, this movie had me jumping in my seat. It's been a while since I watched it, so hopefully it doesn't look dated but it stars Anthony Hopkins and Alex Baldwin. It's a good movie, the scary part is that it could happen, basically some guys get stranded in the wilderness of Alaska and as they are trying to make their way back to civilization, a Kodiak bear keeps stalking them.

And now I'm going to show you something really really scary, it's snowing here already, screeeEEEEEM! AAAAAHH! NO NO NOOOO! 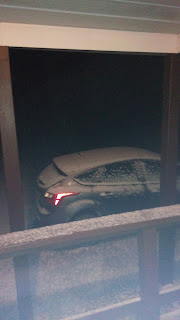 Oh no! Snow before Halloween! How horrific!

There should be a law that forbids snow before Halloween. Really.