I wasn't going to have a garden this year, I decided to just buy fresh vegetables from local farmers markets, I'm supposed to be selling the farm and I thought what was the point, all the work for someone else to benefit from. However the end of May was turning out to be warm and I thought a garden would give the place an authentic feel. So off I went to get a few plants. I have good luck with tomatoes so I only bought three. I felt sorry for the plants that are left, most people have started their gardens already, all the plants left behind will never find their forever home, they will be left to die on a compost pile. I adopted three and named them, Martha because she is an "early girl",  Melvin because he's a "golden boy" and I got my favorite kind "ultra pink" I think it needed a fabulous gay name for an ultra pink. I was thinking that our Maddie is the most fabulous gay person I know of, so that's the name I gave it,  anyway he's gone on vacation, he'll never know.

As I was preparing the garden, the temperature plummeted to below freezing that night and almost every night since I bought them. They are staying inside with me, so much for my fantastic garden, well at least the bugs aren't biting. I just don't want to have to explain what ketchup is to them. 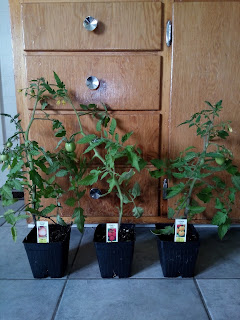 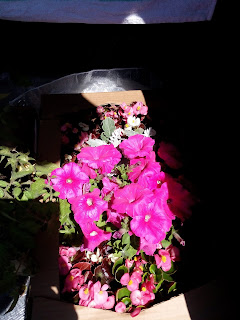 I bought some flowers to cheer up the place, they are called pink madness, that just screamed "buy me" to a gay guy with a green thumb.
Posted by Sooo-this-is-me at 11:34 PM

I am mad-jealous! I so so so miss growing tomatoes. I hope yours do well.

What am I reminded of here? Little Shop of Horrors? Not quite. I know! Attack of the Killer Tomatoes! I certainly hope those plants are housebroken!

They don't let you grow tomatoes? What did you do, start throwing them at people?

Deedles, I think you only have to worry about being house broken if they were pea plants! Yes I went there lol.

Mike I should post about when I lived in the city, my balcony was a garden, people were so shocked they came to see it.

John, who are you calling a petunia? Lol, yes, one of my favorite flowers, easy to grow.

I hope you have photos of your urban garden of eating! Which city.

Yes you went there, and it was funny! I so love plants, but I have a black thumb. I can't grow mold on stale bread!

I have missed you my lovable gay friend!!!! And actually did read somewhere whilst away... a plant of some kind got named after me. You are too kind to name your little tomato plant after me. I only hope it will produce nice, hefty and meaty tomatoes for you! I feel pressure for this little plant to do well now.

Two summers ago I got a little tomato plant, one that could be planted in a pot. To my amazement, I didn't kill it. Later once it produce it's fruits I found out it was cherry tomatoes, not full size ones. But I'm told it's not the size, but the magic in it.


They were pretty tasty I must say.

Maddie, we plant cherry tomatoes, actually they are volunteers. Very reliable, ripen before any of the usual diseases attack. Decades ago some went bad in the refrigerator. I told farmer Bob to bury them in the garden. 'Not going to work.' Sure enough they came up the next spring and have been volunteering ever since.

Mike, I do have photos, I will post them sometime. What city? What do you mean what city, you have been a fan long enough of this blog... you tell me what city? Lol

Deedles, after digging in the dirt for a while, I have a black thumb too lol!

Oops! Umm, umm oh hey hello Maddie, I know nothing about a plant being called Maddie lol! Actually no pressure Maddie, ultra pinks are an amazing plant, instead of growing six or more plants, I just grow two or three ultra pinks. This year just one.
I missed you, the blog world wasn't the same without you. Holy cow you look great in shorts! I'm jealous.

Mike sweet gold is the best, they are orange and juicy sweet. One year they crossed with the bigger kind and grew wild everywhere. The tomatoes looked like tangerines and the taste was awesome!

Is there anything better than a home grown tomato? I bet that garden you had in the city was spectacular.

Thanks for that tidbit Mike. I will have to try that. I love just popping them in my mouth to nibble on.

I'll try to keep my g ams nice and in shape for the honeymoon !!!

RJ, yes nothing beats the first tomato sandwich of the year! I'm searching for photos of my garden in the city.

I love the way you are always thinking about me, yes please keep yourself looking good for me, meh... or not... I will love you either way. :)

Tomato sandwich? URP! To tell you the truth, the only tomatoes I like are grape tomatoes. They're sweeter. My neighbor grows tomatoes and zucchini every year. I loathe zucchini, but balder half loves it, so I accept the gift with a fake smile and thank you. People seem to grow these things just to give them away! I must admit though, her homegrown tomatoes are so very tasty and sweet that I will plow thru the bag and eat them like apples, but sandwiches? Just no.

I enjoyed your photos of FI. Bob and I stayed at Cherry Grove in the late 70s, last house on dunes before no man’s land. Weekend of the costume ball ooo la la’

Deedles what kind of sandwich attack did you experience? Tomato sandwiches are the best. Fresh bread with some mayonnaise spread on the bread, salt and pepper even a little chopped green onion and yummy yum yum!

Steven I was once attacked by a sammich made soggy by tomatoes! Tomato on the side, sure, but not on bread! Bleech! I will however defend anyone's right to eat soggy tomato (again, urp) bread. I need hard, firm meat in my sammich.

Deedles, you are supposed to make it and eat it, I guess it would be pretty gross if you wrapped it up and ate it later. Now I want a roast beef sandwich because you said meat. Lol