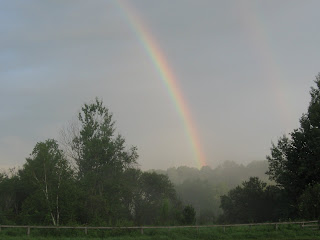 Since this is the beginning of Pride week in Ottawa, it certainly is fitting then that the week began with rainbows and the constant rain we have received all summer stopped. The entire week calls for sun sun and more sun. In this city the week leading up to the parade is considered Pride week, the city is behind it and even flies a rainbow flag at city hall. There will be events all week and Dave and I may try to take some in. The reverse side to all the sun is a lot of my family members live on farms and are really in trouble with all this rain, setting them back months in their work that needs to be finished by fall, so family come first with me over fun.

With the parade coming up, I keep hearing the same old, same old, you know the same whining lady that manages to get her pointy nose on camera and say "umm... errr.... wwwwhy do they need a parade, no one gives us a parade because we are straight". I used to actually be embarrassed by the parades, I saw them as a freak show. I often wondered why every guy wore a dress and every woman looked like a biker. I 'used' to think if they wanted acceptance, why not act "normal". Once I started going to the parades I saw there were a lot of very ordinary looking every day people there, it is just that these people do not make for good news clips and sound bytes, so they will never make it into the main stream news. I also understand that for some people, being a man and wearing a dress is their "normal", it does not hurt me so the more power to them if it makes them happy. Why a parade, well after seeing another clip of someone yet again whining about this, we need a parade to keep us in your face, yes that may seem a tad aggressive to say but it is the truth. We are not going to go away, this is not a fade, we will not give this up and go on to something new and trendy. We have been around ever since humans could record time. We will give up having a parade when we see gay couples represented in commercials, plus not have a boycott of the company that was trying to be inclusive, when we don't have to fear for our jobs or fear not getting promotions because of it, even in protected places like Canada it still happens. We will stop when being gay is just like having blue eyes, being tall or bald, we will stop when there are no longer organized groups that spend their every waking hour trying to keep us down, quiet, ashamed, we will stop when people no longer feel it is their duty to beat or even kill a person for no other reason than they are gay. As for a straight parade, when you have lost your job, been forced to stay quiet about a loved one, used as a scapegoat by preachers or beaten nearly to death for being straight, then you can have your own parade too lady! Unless they have a bitchy whiners parade, then you can be Grand Marshal.
On the brighter side of things, this is quite a small city but there are nearly 35000 people that line the streets to watch the parade and take part in the events after, so there is certainly support for us, besides it is just a really fun day 'out'. I am really excited about going this year because I have Dave to go with now plus I am out to (and will know) dozens of gays and lesbians who will be there also. I am going to support my gay brothers and sisters but also on the shallow side of my personality, I am hoping it is going to be really hot and sunny so the muscle guys take off their shirts! Rainbows all around to everyone! The bitter boring people can stay at home, although most like to come also and take part in the fun with the excuse that they wanted to carry bible quotes on signs, but we all know they are checking out buns and packages (foot tap tap tapping).
Posted by Sooo-this-is-me at 8:06 AM

Steven, I LOVE this post!! Thank you so much for writing this. This is an excellent explanation of why gay pride events are necessary.

I have been speaking out more often when I'm in public, in the company of straight people. I don't get out much, :), so I don't have a lot of opportunity. And sometimes the topic is irrelevant. But when it is, I've been speaking up in support of the glbt. One response I've gotten is this question exactly: why do they need a parade? I have given some lame answers, like "It's an opportunity for them to get together and publicly enjoy the feeling of acceptance." But this one is so much more powerful!! I think I'll print this out and carry it around with me.

Great post! I hope you enjoy your Pride celebration!

it's good to be reminded that for many of us, it is easy to take it all for granted and the parades may not seem to be all that important, but the parades are more for the many who still are trying to accomplish what you have, what i have, what a totally out gay person has.

until we are treated equal in every way, we need to stay visible and let the haters know we are proud to be who we are.

Hope you have an awesome time!

Have a great time "checking out the buns and packages." ;-) And set those people "straight" about why we celebrate.

Excellent post, and those "why do they need a parade" people either are stupid or bigoted and acting stupid as a cover (or maybe just stupid and bigoted). What amazes me is that people will say hateful things in public without shame at what they're saying. Don't they understand? I suppose not. Just like people decades ago saying horrible things about black people would draw gasps today, so will words such as those you've heard if they're said years from now. It may take a while, but the bigots are losing, and that's definitely a good thing!

Wow, it sounds like you are ready to be a sound byte for this year's Pride parade!

It is frustrating that the media focuses on the more extreme side of gay pride. It kind of stereotypes us all and many people don't see the diversity among gay individuals.