Of Mouse and Man

I like to switch back and forth in my posts from serious, to every day, to silly. I do not want to become a dramatic soap opera as I feel that could become boring to my thousands of (okay eleven) readers plus that is not who I am. I try not to dwell on the rough areas that life throws at people. I would not want people to think I am shuffling around listening to sad songs all misty eyed. As I said before, most of the time when I am with Dave, I am usually fairly happy and we are doing something silly like having a water fight (he needs to learn no smart ass comments when I am holding a garden hose with a spray attachment on the end) we can be like two kids most of the time and we spend a lot of it laughing and teasing each other. I did have a lot of fun helping him build his work shop with his family and it was actually pretty hot watching my man in action (he needs to learn no smart ass comments when he is up in the shop loft and I am holding the ladder which is the only way down from there, as it can suddenly go missing) I even learned a lot about construction-ish stuff.

It was a dark and stormy night, no really it was a dark and stormy night, wow I have always wanted to be able to write that. Anyway Dave had already gone to bed as I complained... er... um... I mean mentioned that he likes to go to bed early. I on the other hand was not sleepy and so came back down stairs to watch some TV. After about an hour I could hear a storm approaching. I turned off the TV and went into the kitchen to watch the lightning as the storm was getting closer. In the garden Dave has those soft solar lights which gently light up the paths he made through the beds of flowers. While watching out the window I saw the silhouette his little cat zipping through the garden, I figured she would probably want to come in to avoid the rain so I opened the door and called her. I could barely see her in the darkness but I knew it was her by the white markings she has. She was happy to see me and came running up onto the deck and in the door as fast as her little legs could go. The lights were off in the kitchen and so I could not see her once inside, but as I closed the door and walked towards the living room, I suddenly had a sinking feeling as the scurrying sound on the floor told me that she brought something in with her! I hoped it was just a frog or toad, the thing with Dave's cat is that she is small but has the strongest prey drive that I ever saw in a cat, she will go after animals that most cats would avoid (even going into a creek after small ducks). I was dreading a rat, black squirrel or worse, a water rat which are huge and have a nasty bite. I turned on the light to see a mouse sitting in the middle of the floor. It made a dash for me and I did the "don't crawl up my pant leg dance", (well I was actually in my boxers but that would have just been worse) as it rounded a corner to escape. Having survived the mouse assault I had to think what I was going to do, if it were to escape under the stove or fridge, how would I explain to Dave that I let a mouse into his house. The cat was on him as quick as a shot, I figured let nature take it's course but she has a nasty streak in her where she likes to play with her food. In a move where she would playfully look up at me as if to say "look Steve what fun we can have" she would bat him and send him flying into the air and then it would hit the ground running (mostly in my direction). I don't have a problem with mice really, I am not afraid of them nor do I hate them, but still when something shoots between your bare feet it can give you a bit of a rise. I was sure he was going to get away if I could not catch him myself or get him to go out the door. I was quickly looking for a pail or something to catch it with. Like I said I don't hate mice but it was time to end this cruel cat and mouse game as I was not able to catch him live so I ended it quickly.

The cat was not so pleased with me, she gave me the dirtiest look I ever saw a cat give someone. I am not sure if it was because I ruined her game or if the mouse was my gift and it is like when you return an ugly sweater someone gives you for Christmas. I tried to scoop up the mouse to throw it outside, the cat thought this was another game and kept knocking the mouse off the newspaper I was trying to scoop it up with. I was so hoping Dave would not come down at this time, imagine the scene of me in my underwear wrestling his cat for a dead mouse. I listened and could hear him still snoring. At this time the cat suddenly realized what I was trying to do, grabbed the dead mouse ran around the kitchen and then suddenly crunched down the mouse with sound effects that has kept me from eating chips for days, even slurping up the tail. She looked at me, I looked at her, I said "there is no way I am leaving you in hear" as she likes to wake us up in the morning by putting her face in our ears to get us up, I did not want to smell mouse breath. I open the door and back out into the night she went.

I went to bed, as I slipped under the covers Dave woke up and asked "everything okay?" I just said yes and told him to go to sleep, I figured I would wait until the next day to explain how the circle of life played out in his kitchen... well after we had breakfast. 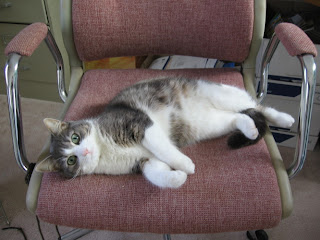 Look at me, I'm wittle and cute and would never cause any trouble.

..Wanted!..
Yes mice every where be on the look out for "baby face" Toby, it may be the last face you ever see... muahahaha!

Our former kitty—may she rest in peace—brought in a couple of mice from the garage, including a baby. I had to catch the things to get them outside again.

She was an indoor cat, so she had to improvise when she wanted to hunt. So she'd go down to the basement, kill a dirty sock in the laundry, and carry it upstairs while yowling her deep hunting cry. She'd carry it through the kitty door into the kitchen, where the dog would take it and bring it to me. The dog loved getting praised for this and would wait eagerly for each sock. She's taken to stealing socks from hubby, now that her supplier is gone.

Birdie, so if you had one sock missing from a pair, did you frisk the cat and dog?

we have a cat and we don't let him out for fear of what he might, as the saying goes, drag in.

we have possums and squirrels and worse, skunks, that wander the neighborhood. so i would rather not have any of these left at my feet as a gift.

But your post did remind me of Simon's cat. In case anyone has missed it.

This is hilarious! Our cat likes to play with his food, too. Quite distasteful. However, the other day he caught a mouse that ran out from under our stove. Not sure how the mouse got in, but I was glad to see it go out!! I opened the door and the cat carried it away.
So did you tell Dave about the drama in his kitchen?

I'm still laughing at the sight of you doing the "don't crawl up my pant leg dance." Glad the night ended as you wished. Whew!

"...imagine the scene of me in my underwear wrestling his cat for a dead mouse."

I did. And I'm LMGAO! Are you sure you didn't dream all that?

I was afraid you'd invited a skunk into the house, at first...on that score, I'm so glad I was wrong. But then...

"the mouse was my gift and it is like when you return an ugly sweater someone gives you for Christmas" Ha ha...this was great, Steven.

The Adorable Precious doesn't understand what you're talking about. Crunch. : )