Seven Billion Plus One.


Another post I never finished, this was back in 2016 believe it or not. I had placed mom in a nursing home and I was heading towards my 50s. I never finished because it was a very dark time for me, I had never felt so alone before and everything in life became so pointless to me. I imagined in my head that nobody ever thought of me, I was slightly depressed I think. Someone had abandoned a little cat near my home around that time and after spending the summer half starving, she came to the farm for shelter. I felt we were both forgotten and decided I would rescue her. She became my Dusty, the coolest little cat I ever owned. I felt that it was too difficult to finish the post the way I wanted. Anyway here we go. Remember this is four years ago before I met Mr X.

One of the serious reasons I would like a boyfriend, is because I need to feel that at least one person out of the seven billion people on this earth...  loves me. When mom forgot who I was and with dad gone, I realized that even with our vast population on earth, out of the billions of people, no one actually... loves me any more and that is a crushing feeling. It's a hard fact to accept, sure there are people who care about me and some that like me but that's not the same as being loved by someone, a partner that feels lost without you when you are not around or a parent or grandparent that adores you. It's that horrible feeling, like when you are standing in a crowd but feel alone.

Little unwanted cat, no one cares about you, even worse off than me as you were abandoned by the road, to live or die, it didn't make any difference to your owner.. Maybe when a person is hurting inside and is keeping silent about it, maybe the universe somehow takes note and tries to send help, even in the smallest way.

One evening after coming home from work, feeling numb inside I went out to look after the animals. I went to the farthest shed, hiding in there is a little lost cat, actually it's not lost but something worse, not wanted and dumped like garbage onto the road.

I went to the house and got her some cat food and a little dish. I had been placing food out wherever I saw her last. She watched me put the food down and understood what I was doing. I went and sat down. She hesitated for a long time and then finally came to the food. While eating she looked at me with the saddest expression, almost an expression of exhausted resign, as if to say, "please don't  let this be a trick, please don't hurt me". I made her a promise that day, I whispered to her, "I will take care of you". 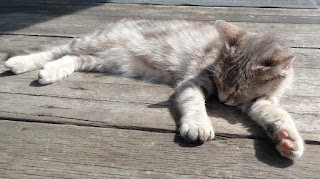 A few days later she came over to where I was working and fell asleep in the sun.
Posted by Sooo-this-is-me at 10:35 PM

I love your story, and that little kitty is just so sweet...thank you for rescuing her! Or, did she rescue you?

This story reveals just what a beautiful soul you have.
Hope you are keeping safe and well. X

Steven what a kind and compassionate heart you have. Yes this was a difficult time for you. So many things going on. And yet you found the time to help a little helpless creature.

And your Mom may not remember the person you are today but she still loves you. It’s just the person she remembers may be the little boy you once were. I know it’s hard to reconcile and it hurts when that love isn’t expressed. But know that it will ALWAYS be there.

Aww
This was so beautiful! You see, posts like this is why I still blog.
You are a sensitive soul, Steven. Underneath those cargo pants and that button down shirt (from Sears, natch!) there is a very kind person. That kitty found you at the right time.

do you still have dusty kitty?

I only get mushy once every 30 years or so, so this would make the first time...this is why I like and love you. You have such a beautiful soul. And yes, the cat rescued you.

But I would still swear he are twins separated. The good and evil one.

I get it. I feel that way too but I am sure people do love you more than you know. Regardless of whether they are there or not but it is nice to have someone to share life with.

I'm with Anne Marie, do you still have the cat? Sometimes, things come in to your life for a reason.

The beauty and wonder of cats! HRH approves this post.

Same question as the others...do you still have the cat? This was a great story. Glad you decided to post it. I don't know what I'd do without Murphy.

Lefting, I think a little of both. She was quite the character.

Christina, thank you and you stay safe too!

HuntleyBiGuy, I just felt someone needed to about her.

Sixpence, okay I confess to being a really sweet guy but let's just keep this our little secret!

Bathwater, yes everyone needs someone... or at least I believe that anyway.

Jimmy, some things seem too purposeful to be just a coincidence. Sadly no Jimmy, I no longer have her.

Debra, I am so honoured that the Queen of kitties approves.

Michael, no sadly she died last year, that's the first time in my life that's ever happened. Of all the cats we have ever kept, he she was my absolute favorite.

Sorry to hear that...