I was watching a comedy the other night, it was a repeat episode from about five years ago, so well before the covid disaster. It doesn't matter what show it was because they were playing a common premise. One of the main characters had to get a job, he was lazy and had been living off of family. He applied to work at a grocery store and right away that was supposed to imply something very negative, that the people working hard for little pay were somehow beneath this "cool" parasite, he was somehow, better than them. 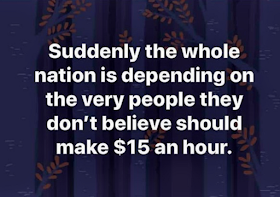 I believe everyone has value, I respect any hard working person that does a job and does their job well. I don't discriminate against the type of job they do. During this time of... well.. danger, these workers are the ones standing between something still resembling normal times and panic from total chaos. If people went looney over hand sanitizer and toilet paper, imagine if grocery stores shut down for four weeks. I am hearing stories of employees being yelled at and treated rudely, in Quebec one young father was run down because a customer didn't want to have to social distance in a parking lot line up. 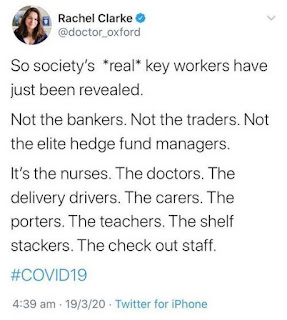 I have mentioned before that I always make it a point to speak with the cashier and the person bagging my purchases. Usually I make a little joke, it's just my little way of saying, "I see you, I appreciate your service, you are not just part of the counter/cash register system. Usually they light up once they realize I'm making a connection with them. Something different from being ignored all day by people talking to their phones while staring at them. I'm really glad that I have never taken for granted these people, especially now with what is happening around us. Sometimes there is an attitude that these people should work, its their fault for not working in a "real" job. It's their fault for not being able to save for a rainy day. 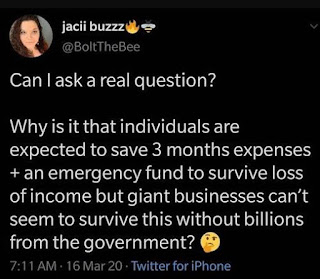 I hope people sheltering safely at home would think about the poor person behind the counter, I know that I certainly wouldn't want to be dealing with customers all day! I also hope that portraying those workers as idiots, too dumb to find another type of job, will become a thing of the past. I haven't been to a store in four weeks, imagine how many people they have dealt with in the past four weeks. People who have done nothing wrong should not be ridiculed and deserve respect, especially now. I know that I certainly miss the freedom to just go and pick up groceries when ever I needed them like in the old days! 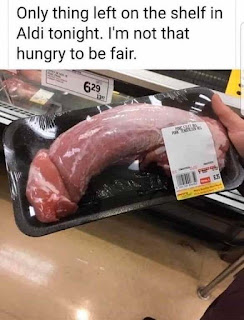 As a gay man I'm not sure wether to get excited or become a vegetarian!

I witnessed a customer being so rude to a cashier today. She was checking me out, and I was attempting to be nice to her, but she was a bit snarky. Then I witnessed this jack ass of a man yell at her, and then I realized that she was just at her wits end. I always try and be nice to people when I am out. To me, it is common sense. Your last photo was quite interesting!

Hahahahaha sorry, I wanted to comment about hahahahaha... really, I cashier sometimes and know hahahahaha. Curse you, that's in my brain forever now!

That was a positive with me today. At all three places I went, the regulars workers all talked to me and I talked to them. They had wondered where I had been so long. But it's impressive to me that they remember me...that says something about them. I'm like you are. Being in a retail environment I see how our sale team is treated, and I don't want to be that person. Everybody should be shown respect. I shall make them treats to take in sometime.

Debs....I have paid more than $6.35 for less than half that meat. The things one could make do with that.

My daughter has a first class degree in English language and literature. She took a year out after her studies and on her return she got a temporary job in retail. She was appalled at how some customers looked down on her and her colleagues. How rude and inconsiderate they could be.
She, very naively thought others would be like her, just seeing a person, not judging them by what they did. It was a rude awakening for her.

Steven. My eyes can never unsee that last picture.......😉

Ok I admit I had to look at the last picture a second time after everyone commented on it 🙃.

I’ve worked part time in retail. The horrors they put up with. It costs nothing to be kind. But some people were just born ass wipes. They should be banned from the store.

We would not survive without the people who keep the country going. And it's service workers.
I would not be able to do it. Seriously. The bullshit they have to put up with! I always try to smile and respond to their greetings. They're out there in the front lines. We need to be thankful.
I laughed at that last meme. Damn! LOL

Viruses are not just biological entities but social things they bring out the best and the worst of a society, its make up and failures.
No surprise then that the 'workers' are revealed as the true workers of life not the nabobs on top.

I'M NOW FULFILL FINANCIALLY BECAUSE OF THE LOAN I GOT FROM LFDS .I would like to bring this to the notice of the public about how i came in contact with LFDS after i lost my job and being denied loan by my bank and other financial institution due to my credit score. I could not pay my children's fees. I was behind on bills, about to be thrown out of the house due to my inability to pay my rent, It was during this period my kids were taken from me by foster care. Then i set out to seek for funds online where i lost $3,670 that i borrowed from friends which i was rip off by two online loan companies. Until i read about:Le_Meridian Funding Service  (lfdsloans@outlook.com / lfdsloans@lemeridianfds.com) somewhere on the internet, Still wasn't convince because of what i have been through until a relative of mine who is a clergy also told me about the ongoing loan scheme of LFDS at a very low interest rate of 1.9%% and lovely repayment terms without penalty for default of payment. I have no choice than to also contact them which i did through text +1-989-394-3740 and Mr Benjamin responded back to me That day was the I'M best and greatest day of my life which can never be forgotten when i receive a credit alert of $400,000.00 Usd loan amount i applied for. I utilized the loan effectively to pay up my debts and to start up a business and today i and my kids are so happy and fulfill. You can as well contact them through email: (lfdsloans@outlook.com / lfdsloans@lemeridianfds.com)  WhatsApptext  helpline: +1-989-394-3740 Why am i doing this? I am doing this to save as many that are in need of a loan not to be victim of scams on the internet. Thanks and God bless you all, I'm Oleksander Artem from Horizon Park BC , Ukrain.