I'm having a tomato and onion sandwich, I'm blogging about it because it grosses someone out (@ Deedles lol). They are the last tomatoes from my garden. I picked them green at the end of September and let them ripen on the counter. I'm going to miss them when they are all gone because I can't stand the tasteless ones in the stores. I can't keep them much longer because I caught some dealing drugs and gambling, yes some of my tomatoes have gone bad! That's a terrible joke I know, I know. I would like to try to have some make it to December, that would be the longest ever.

I'm having a wild and crazy Saturday evening of defrosting my freezer, it's an upright freezer and the idiot who designed it never thought about where all the melting ice would go, there is no catch pan for the resulting water. Obviously it was a straight man who designed this because he would never have to deal with the mess! 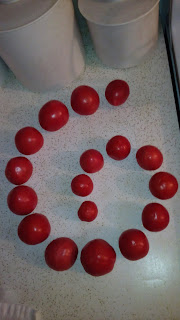 I fall on the side of Yasssss, tomato and onion!

I also fall on the side of giggling at your joke.

Bluuuurg (the sandwich, not the cute joke)! The only time raw tomatoes and onions should cohabitate is in a salad, the onions (red), tomatoes, cucumbers sliced with shrimp (optional) and soaked in zesty Italian dressing! Bread shouldn't enter the picture at all! I HAVE SPOKEN!!

Anne Marie, fresh bread, "real" tomatoes, onion greens or a few slivers of onion with mayonnaise, salt and pepper is yummylicious! :)
I don't know anything about high heels but I certainly would chase after the person with a fake gun that designed this freezer, especially when I have a bank of towels around it to stop the tsunami of water from spreading everywhere! Aaagh!

Thanks Bob, I have to correct my joke, I said can instead of can't but I was sleepy. :D

Haha. I've had tomato and onion sandwiches. I have made a sandwich of pretty much anything that was left in my refrigerator at one time or another, though.

Thank you Debra, I was trying to be artistic in a tomato kind of way.

Steven, you should try the salad. I also like using a vinaigrette, a little salt and pepper or whatever. I really shouldn't bluuurgh your sandwich choices. I've found out that my affinity for fried salami, lettuce and grape jam sandwiches is not in anyway, shape or form normal!

Deedles, now you're my blog buddy and I'm not judging you in any way but... I don't think the words salami and grape jam are even allowed to be in the same sentence!!! You did say grape jam and not the American grape jelly so you have a free pass...... this time. Lol

It doesn't have to be salami. Baloney is good too. It just has to be fried. I double up the slices, spread a thin smear of jam, add ice berg lettuce and bam! Yummy! I do prefer jam to jelly and preserves over jam. Thank you, bud, for not judging me. I will try to do the same, but, no promises :)

I finished the last of my hot pepper stash two weeks ago. Ever since then I have been crying myself to sleep. Now comes six months of cabbage and root vegetables.

I am mad-jealous! I would sell my own grandmother for a home grown tomato right now.

Can I have some cheese with mine?
JP

Dr Spo, I don't understand, why can't you grow tomatoes around your area? Are there no farmer's markets around where you could buy some?

JP, no... you can have lettuce or some baby spinach but no cheese for you!