Maybe it's a stereo type but what is it about gay men and flowers. Many of us love the pretty, pretty colours.. lol. I remember many years ago now, my friends were talking to their boys aged 12 and 14 about their uncle Phil. The parents could see that the boys were forming questions about uncle Phil but we're hesitant to ask. They assured the boys that they wouldn't get angry.

Finally the older boy blurted out, "don't get me wrong, we love uncle Phil but.. but.. well we think uncle Phil is gay.. he's gay"! The parents smiled and said that they thought the same as well. They asked the boys what lead them to this conclusion and one of the things they listed, was how much uncle Phil liked flowers and growing flowers. That's when one of my friends said, "well Steve loves flowers and growing flowers and he's not gay"! Umm, ahem, oops tehehe, maybe kids are a lot smarter than they smell. I was no where near coming out at that time so I just kept quiet. 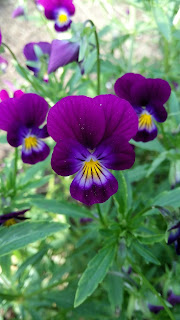 Jumping Jack's, these grow wild all over the garden and flower beds. They are a domestic flower but they are excellent at reseeding themselves, easy to transplant to any flower bed you want them, they have been growing here all my life. 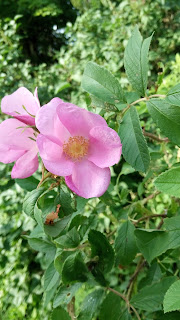 Here is a better picture of the heritage roses, they hadn't been mangled by the beetles yet. Something happened to the bugs, many got hurt, muahaha! Still very different from today's rose. It makes me think of the first time I received flowers as a gift, I believe they were roses. They were given to me by my ex Dan, I remember feeling conflicted inside because flowers were traditionally given to women, I was a little embarrassed and my male ego, slightly insulted. I realized that I wasn't in a traditional relationship and would have to get used to this. I would eventually learn to love getting flowers and looked forward to getting them. Comical when I think back to how tightly wound I was. Now I would be happy to just receive any kind of flowers from someone :(   even a piece of lettuce would do these days. 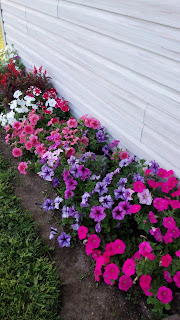 My petunias are doing well again this year, they are my favorite flowers. 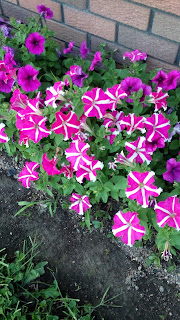 Hi Drangeas! How are you doing? 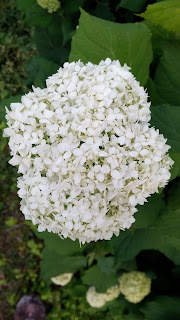 A Hydrangea flower, it grows on the north side and has been there most of my life. 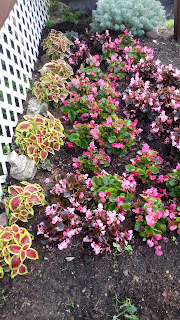 I messed up my colour scheme, I should have put the darker leaf plants in the center and the green leaf plants out front.

Now, you have a test... can anyone name this next flower... what kind of plant is it? Jimmy? Anyone? Anyone? 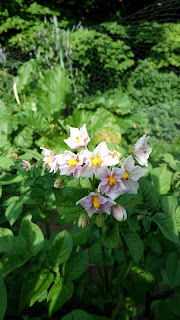 Well if you can't guess no worries because it's a trick question, it's a potato plant, this is what their flowers look like. Funny thing about potato plant flowers, you can't sow potatoes too close to tomatoes because they are in the same plant family. If you do, the potato flowers will form something similar to small tomatoes but they are not edible.

There, these are some of my flowers, but it's not gay to like flowers!!! Ok maybe it is but who cares anymore, it's only going to make me like a man more.. not less lol! As for uncle Phil, he came out of the closet, married a drag queen, one boy was best man, the other an usher at the wedding and everyone lived fabulously ever after! The end.
Posted by Sooo-this-is-me at 7:59 PM

flowers are for everyone. but my gay male friends have better luck growing them than I do; must be the fairy dust and glitter. I will live vicariously in your garden.

and that fact about potatoes/tomatoes is interesting!

It's that gay gene. Your flowers are gorgeous! And you have such an eye for color. Very impressive. I'm glad you very slightly unraveled.

I identified those as potato flowers, but you won't believe me because you posted the answer. Potato flowers are so pretty! Do you have to pluck them so more energy goes into the potatoes?

I am pretty sure gay men like flowers because they are obsessed with staring at genitals.

Those pictures are nice, I which you did more. I always have cut flowers in the house...lately in the summer, every room. This week I have Sweet Williams and hydrargyrias mixed together. I have a post coming about some deadly secrets in the garden......stay tuned.

And if it will make you feel good and loved, I am putting a whole head of lettuce in the mail to you. Head of lettuce, not Hedda Lettuce.

I love getting flowers! Balder Half was always reluctant to bring me any. His logic: "Flowers are dying. I'd rather give you a potted plant." I appreciated the thought, but the point is the flowers would be for me, and I like them! Besides, a potted plant coming into my possession would be just as dead. It would just take a little longer. I now get flowers :) Up to our twenty-fifth anniversary I would receive a rose for every year. First year, 1 rose, second 2 roses etc. He's such a romantic. I'm not. I do prefer carnations. They smell good and last longer, even in my clutches!
That is an interesting fact about potatoes and tomatoes. Now for all of you gardeners out there, what's with all the frickin' zucchini?! I can't stand the stuff, and yet those who grow them are always giving them to me. BH loves them so they don't go to waste, but really, if you don't want them, stop growing them!
Your flowers are lovely, Stevie. I've already killed two potted petunias and a couple of houseplants that I forgot I had.

Frickin' zucchini is a prolific producer in the cucumber/melon family. It either dies of cucumber wilt or it produces and produces. One plant can give you a dozen zucchini, and if you do not harvest said zucchini early enough they grow to the size of Mistress Maddie's... forearms within days, instead of staying dainty. Optimistic gardeners put in a few plants hoping to enjoy a few zukes, and then they quickly get overwhelmed.

Furthermore zucchini is mostly water, so gardeners don't mind giving them away. Balder Half is a hero for consuming them and should be applauded by gardeners everywhere.

Thanks Lurkster! I've always wondered about that size differential. So basically it becomes an old 1950's monster movie, THE PHALLIC THAT ATE NEW JERSEY! Balder Half is a saint when it comes to this particular veggie. Our neighbor gave us one last week that was the size of Maddie's ...thigh. UGH (the squash, not Maddie's thigh).

I love cut flowers in the house but lately I've been buying orchids. You're flower look great!

I hope someone gives you a big bouquet soon! (no lettuce)

You don't have to be gay to like flowers or grow them. I have an uncle and his sons that are great at it and they own a flower business and have done quite well. So no, not everyone is gay if they like and grow flowers.

Nothing gay about flowers. They make us feel happy, and the colors can brighten a mood. Your flowers look to be doing very well. I used to be a horticultural landscaper. We did lawn care and all that but I was the one who did the flower bed designing, and creative bush trimming, before getting into fitness and a side of tech services.

Is Maddie alright with being compared to a roadside farm stand? Forearm like a zucchini, thigh like a squash, and we know he has nice English cucumber😜😈😵

Anne Marie, yup we sprinkle them with fairy dust... works every time! ;p

Jimmy, thanks for the compliments. I knew you would catch the tightly wound part... lol.

Old Lurker, it's ok, I believe you, I believe you! Usually older people know because they have been around potatoes growing somewhere. Younger people think they are made in a potato factory out of flour or rice.
I think if you pinched off the flowers... you would not have potatoes!

Maddie, I will post more later on. Sometimes I bring flowers inside, they cheer up a room. Thanks for the lettuce... lol! :)

Deedles, zucchini ugh! Lol right? I turn off the lights and hide when I see the zucchini people coming. I can't stand it, fried zucchini is like frying an old cucumber, they should make a law against eating zucchini! A friend's girlfriend gave me muffins and bread made out of zucchini and they however were delicious... actually I'm messing with you... they were disgusting, like a muffin that someone injected a mushy cucumber into... gross!

Old Lurker, didn't I already deal with you? Just kidding, hugs and smooches, I think your explanation is spot on for the most part.

John, you have style, it's one of the gay benefits! ;)

Debra, so sweet thank you.. and yes I prefer spinach! Lol

Leanna, lol yes there are many family run businesses and the couples are heterosexuals.

Cali Boi, thank you. Yes they give us colour and brighten up our day. I didn't realize you switched careers, good for you, it's always good to try something new.
As for Maddie, you know her, she's an attention whore (but not the other kind of whore) that gurl is going to love this! He must have a garden as well because I saw a picture of him holding a zucchini.
* Just in case someone tries to accuse my sweet Maddie of being the other kind of ho, keep in mind that they get paid, Maddie does it for free so there!

Ah, but the Old Adam, the first man, his job was to tend the garden.

Dr Spo, and if he had went with Steve like he was supposed to.... there would have been no apple and eve! :D