To The Bat-s Cave

The morning of my birthday I knew we were going out in the country but I also knew it was not just straight hiking (no pun intended) as Dave had something up his sleeve. Turns out he was taking me to explore some caves, I had always wanted to try this and now I finally had the chance. He said we need to have a good breakfast before we go but first he would give me what I really wanted..... then we had breakfast an hour later....yes I said an hour!
Dave had recently shown me how to play checkers, it may sound funny to some but I never knew how to play checkers before. I became hooked and so he gave me as my first gift my own game, he was a little embarrassed by doing that but I thought it was cute and loved the gift. After breakfast I still did not know what he had planned for us but we dressed warm and headed out. It was a beautiful sunny day, lucky for us as the past week was cold with lots of snow. We arrived and I figured out what we were doing, the guide had us put on our hard hats and got ready to enter the cave. 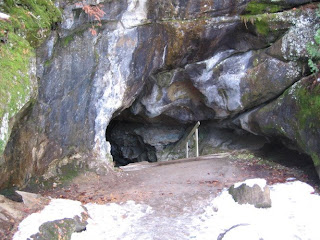 It was dark and a little creepy and...I loved it! We came upon a group of bats sleeping on the ceiling, I thought what a good picture that would make for you guys to see and so snapped this pic, the flash was very bright, yeah probably should not have done that, you really should not scare bats when you are trapped in a cave with hundreds of them. 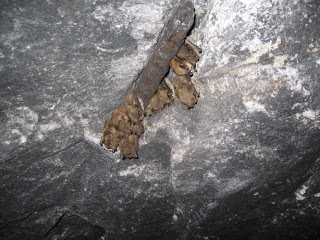 Okay onward we go, watch out for the water, hope there are no bears sleeping in there. 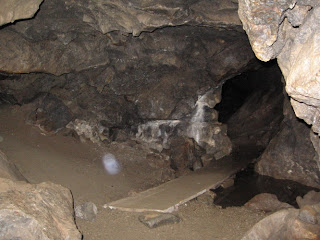 More sleeping bats again, this time I remembered to leave my flash off. No I'm just kidding, I did not use the flash for a spooky effect, the bats are asleep for the winter, nothing can wake them up only heat, the guide told us that they will not awaken from camera flashes, our movements or sound, only heat will awaken them as they wait for spring. Some bats even had frost on them and looked frozen. They were actually really tiny. 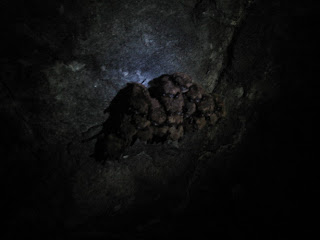 You could see where water once did flow through these caves. That is supposedly what formed the caves. 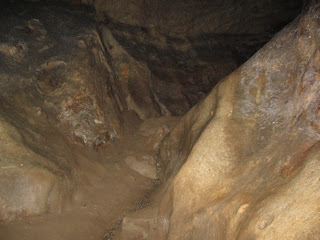 There were stairs in places to help you get up or down, this way everyone could enjoy the caves. 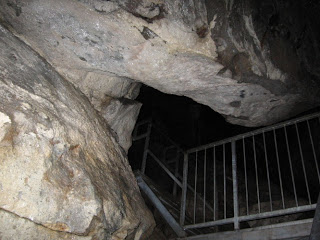 Getting near to the end, we were shown a cave-in, rocks collapsed and blocked this part of the cave, maybe we should get out of here now! 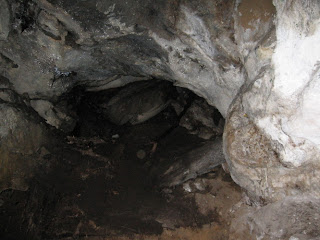 Ahh, light at the end of the tunnel. I did not get to take that many pictures as I was having too good of a time to think about my camera. Also some pictures just don't show well. There was a part of the cave they called the cathedral and it was as big as a church inside, yet it does not show up on film, the size I mean. 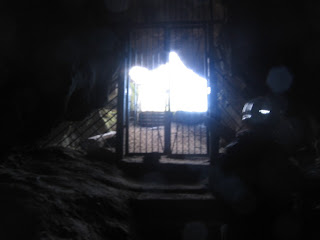 We went hiking after and I will put those pictures up later. We enjoyed watching the guys zipping around on cables, this spring we are going to come back and give it a try. You hike to the tallest mountain (our mountains are hills really) and then you strap on a harness and slide from tree to tree on a cable going from one mountain to the other back and forth until you finally make your way back down to the ground, looks like a lot of fun. 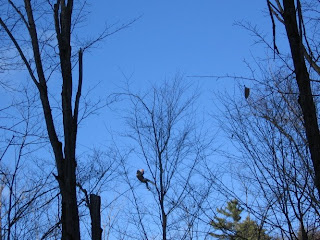 After the hike Dave took me to a restaurant where the waiters and waitresses sing and some dance. I thought it was going to be hokey but was soon rewarded with some really talented young singers, I really enjoyed them and they put on a good show. The food was good, you could order almost anything but their main specialty was a sea food buffet. I also tried frog legs that night, it is no joke, they really do taste like chicken.
The next morning Dave gave me two photo calendars, I asked why and he said this was my birthday weekend not just one day. I told him he had done enough, he said he was not finished yet. He gave me what I wanted again... yes again for almost an hour again... eat your heart out! When I came down from my shower, I was surprised by a huge breakfast of 'gay pancakes' as he called them! They were good! 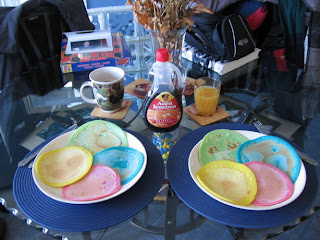 That is when he asked me to look at one of the photos he gave me, he said he liked it best, I kept looking to see what was so special when I suddenly saw the front row seats to the Celine Dion concert. Yeah he spoiled me, it was the best birthday ever, still I love my little checkers game and gay pancakes the best I think, because that shows the cute side of Dave and that is why I am nuts about this guy!
Posted by Sooo-this-is-me at 8:38 PM

Belated congrats on your birthday. It shows Dave is a man full of surprises, even when he gives you the things you mostly wants twice within 24 hours.

Oh, you guys are so darned cute. This is *such* a great post to read. What a fun birthday weekend.

The bat cave is SO cool. What a fascinating experience--thanks for sharing it. I think bats are terrific...

Those gay pancakes are just fabulous!

Those pictures of the bats are wonderful, I dig them. :-) Thanks for sharing.

Definitely a fun post to read. I have to admit, I have never been a card player and have to bow out when asked if I would like to play poker or some other game.

I haven't visited a cave for many years, and I enjoyed your pictures.

Sounds like a wonderful birthday weekend. I love the gay pancakes!! Dave sounds like a really great guy.

Yay, Belated Happy Bday!! That sounded like a really great birthday. And Dave just sounded so awesome for making sure it was a special one for ya.

I can see why one would fall for him.. Muwah!! Again, am glad you had a blast :D

So you played checkers for an hour before breakfast, huh? ;-) What an intriguing excursion to go on. I would have been a little spooked in the beginning, particularly with reports I've seen about bats and the caves they dwell in. I hope you didn't have to make your way over dung. I've always heard that the dung can be quite rancid and make people choke and eyes water. Glad yours was a great time. Those pancakes were interesting.

Wow. Dave has "kinged" you but good!

I think you should keep him. (Yeah, it was the pancakes)