I love Bonobos, if you are not familiar with these little apes, they are a type of chimpanzee. A little smaller than regular chimpanzees, they used to be called dwarf chimps. The thing I like about Bonobos is unlike regular chimps, they are not violent. Regular chimpanzees are like humans, they murder each other, they beat their mates, they can act jealous, they form alliances to overthrow the leaders of their troop, the males are dominant, violent and control the group by pounding on the smaller chimps. 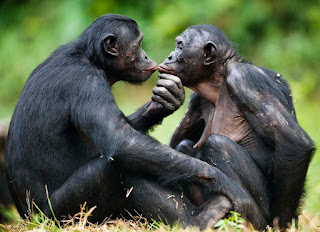 Even better is that this bisexual monkey business, drives rightwing christians nuts. There was supposed to be no homosexuality or bisexuality in the natural world. We know now that the powers that be, had been suppressing this little inconvenient truth in the early days. Bonobos are actually closer related to us than regular chimps. Sometimes I think it would be cool to personally be bisexual, in an open relationship and experience the full picture of human sexuality. 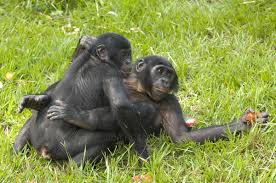 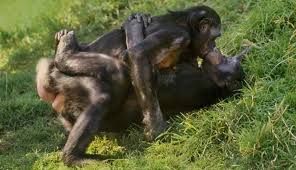 Turn down the lights, turn up the music and pass the bananas.
Posted by Sooo-this-is-me at 10:27 PM

I thought Bonobos was a men's clothing line. And I can't imagine two female chip scissoring. Oh My.

Ape smut, huh? Whatever happened to "a lot of sweet little old ladies stop by this blog" and "I can't have some classy lady like Anne Marie accidentally stumble onto [your filthy] blog and faint"?

Maybe if those bonobos discovered the love of Jesus they wouldn't be resorting to homosexuality to resolve their disputes. It is shocking how Western secularism has corrupted the animal world.

Lurker, little old ladies love animals and will forgive the monkeying around. I believe in the early days it was hard to get the monkeys to sit still in church.

Well, solving conflict through sex seems like the best brand of diplomacy to me!
And you know that Xtianists will try to hide and suppress anything related to sex. Poor idiots.
A social construct that allows people to express themselves freely sexually would avoid wars and fuckery galore.

Sex is sex, love is love. The religious right would have preferred to keep this to themselves. We can’t control to whom we’re attracted. If you are open to the experience you’ll be a saner person. Suppression is not good for the soul or the head. Been there, done that.

>>solving conflict through sex seems like the best brand of diplomacy to me!<<

It would certainly add a new twist to relations between the US and Iran.....

Monkey sex.
Oh dear. I feel like a Peeping Bob.

That said...it amazing how much my sex life is like those chimps....with exception to females.......

Hmmm, I seem to vaguely remember face-to-face sex. It's a misty memory at best. Balder Half and I grew our soft six packs into hard kegs so we have become animals now, otherwise it's like being a teeter totter, interesting but unsatisfying. Whaddaya expect from me? You're the one who posted the monkey smut! I'm assuming that I am not one of the sweet little old ladies that drop by. I also have no class. I did ask for bunnies, dude.

I too find monkeys fascinating.
I have often fancied getting one but sanity intervenes

Well, it is speculated that the natural human condition is bisexuality, and the true sexual minorities are those who are exclusive heterosexual or exclusively homosexual.

Lurkster, don't quit your day job, whatever that may be.

Who is to say my day job isn't writing slash fiction? That would go a long way to explaining my financial insecurity.

Lurkster, with dialogue like "Smooch, smooch, smooch" if you're writing slash fiction you're gonna need at least three other jobs just to put food on the table!

Deedles: fair enough, but do not underestimate the popularity of the Trump Administration slash fiction genre. Pump It In Pompeo sold nearly a dozen copies on Amazon, and Kellyanne Straps One On is selling well too. With any luck, the upcoming Dial Peach for Impeachment will be the breakthrough hit that gets me the gushy food.

*Snort*. I love you Lurkster! Bring on the gushy food!

HuntleyBiGuy, yes been there and really regret that in my case.

Bob, it's okay, I also read that Bonobos are kinky exhibitionist!

Maddie, I'm relieved that you have some limits! Maybe in that group is a Mistress Maddie Monkey!

Deedles... TMI! TMI alert!!! Hahaha! That's okay Deedles, sometimes it's just nice to snuggle and be the little spoon... and "connect" with your partner.

Dr Spo, my sister wanted a monkey when she was little, just like her hero Pippi Longstocking. Harper is better, she doesn't fling poop or climb the curtains.

Debra, well just great, even in a time of softening views regarding sexuality I'm still a minority. I really feel that to be true, they used to say that women tended to be more bisexual; however as younger men with more open views reach adulthood, more and more are engaging in same sex experiences, or are being honest about it.

Deedles, that's not a nice thing to say, Lurker is perfect as a Blogpest coordinator, better than that spam guy with the 1980s boob fetish!

That is just tough love, Steven! I love Lurkster's blog skills, but as a reader of m/m smut for several years I can say for a fact that "Smooch, smooch, smooch" doesn't cut it! Different strokes for different folks :)

Deedles, you are absolutely free to give Lurky a hard time on this blog, in fact I strongly encourage it!!! :D