The Morning I Saw a Unicorn.


One foggy morning, at first light just before the sun came up, a unicorn came out of the mist and walked in front of me. I didn't have my camera ready but there he was, tall long legged, graceful animal with one horn pointing towards the heavens. I stopped my car, he stared at me for a few seconds and then disappeared back into the mist.

This actually did happen and as I watched the animal get closer, it was as I suspected... a young male deer. We always think of a male deer looking like one of Santa's reindeer; however in the first couple of years they often only grow little spiked horns like a goat. Sometimes like this fellow, they only grow one. I was thinking about the old people back in the day, traveling along the road, maybe having a little bit of "the drink" still in their system, probably full of superstitions and suddenly seeing that figure casting a shadow in the fog. There would have been some wild stories that evening.

I had a visitor all fall, a young buck would come to the apple trees two or three times a day. It's not uncommon to have deer in your yard, especially if you don't have a dog but it is almost unheard of to have a male deer. They are much much more weary of humans than the females. I don't hunt, I have no interest in hunting but I don't really have a problem with "true" hunters. I rent the rights to hunt on my land to a good group of guys and they keep away the idiots. I know it may sound strange but it helps keep the wild herds healthy. This picture was taken back in August or September of him. 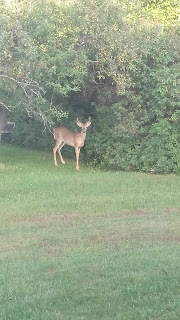 It's the males you are allowed to hunt but not the females so the girls learn to come and eat your flowers while the males stay away. I didn't let myself get attached to the young buck, I felt his time on earth would be short because of his boldness and no fear of humans. Also to be honest he was a huge jerk to the females, beating them away from the apples, even ones with fawns at their side. I had forgotten about him the past few weeks as he disappeared just before hunting season and there were no signs of him since it ended. I tried not to get attached to him... but I can't tell you how happy I
was when he showed back up yesterday!

We let a neighbor hunt deer on our land. He was a preacher in a small church and fed his family with the meat. At the end of the season he'd drop off a couple pounds of ground venison mixed with beef fat. The nextdoor neighbor, who didn't have a farm, never asked permission -- once I heard/felt a bullet whizzing by my head. As for the deer, I don't recall seeing well-endowed males at our apple trees. Females and youngins in groups of 5-10. Maybe southern deer play by different rules!

Only a virgin can catch a unicorn, you know, so don't bother trying!

I've never wanted anything to do with hunting but if you here that it's unicorn season, let me know. Those bastards have it coming.

if the "unicorn" was not farting glittery rainbows that smelled like strawberries, it wasn't a unicorn.

Ohhh love seeing deer! I live basically in the suburbs, so I don’t have many opportunities to see one.

Seems you enjoy hunting mosquitoes. When is raccoon season? (Wow that sounds racist.)

Ohhhhhhh I love deer too. In the Fall is when I get most of them at night. But with all the fox I haven't seen as many this season. Now by the lake...herds!

Aren't they the most noble creatures ever?

On the subject of unicorns, our shops are bursting with unicorns in all guises. Right down to a sleigh being pulled by unicorns.......what's all that about then?

Mike, that's my point, it's unheard of to have a male come to the house. Especially in fall they usually head to higher ground with rough terrain away from people.

Debra, well I have never been with a woman... so... maybe that counts?

Harry, lol am I missing something here?

Anne Marie, I will check with my fairy godmother to be sure. Lol

Sixpence, they are actually moving into the suburbs around the city, less predators more food.

Mosquito season is open season, 24/7 squishing and I have nooooo guilt about it! :)

Maddie, they are a pretty animal, it's why I always forgive their trespasses. Foxes are no threat to deer but they can scare them off.

Christina, noble looking for sure! As for the unicorns, if we are going with a couple hundred years old fat guy in a red suit that slides down chimneys and has a flying sleigh, why couldn't it be pulled by unicorns, lol.

Way to go, Steven. You leaked the conspiracy and traumatized Christina.

Christina, yes, yes Santa is real and the reindeer are real, just like the Grinch is real... only here in Canada we know him as "The Old Lurker".

OL, hey come on... give me a break, I stopped telling the pre-school kids like you told me to, what more do you want from me!